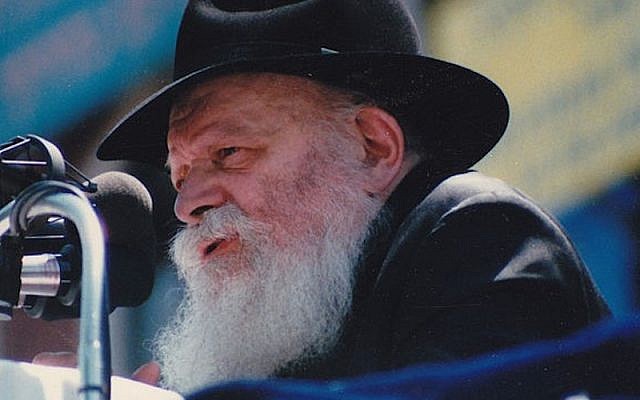 In trying to understand the place in Jewish life of the man we still call, 25 years after his death, “The Rebbe,” implicitly acknowledging him as the unrivaled spiritual leader of the generation, I begin with the dollar bill in my wallet.

I received a dollar bill from the Rebbe in 1990, but indirectly. A Chabad friend, Rabbi Shmuel Greisman, one of the Rebbe’s emissaries in Jerusalem, joined the long line that formed every Sunday morning at Chabad headquarters in Crown Heights, to receive a dollar bill for me from the Rebbe. Already in his late 80s, he would stand – not sit – for hours, handing out dollar bills to each person who came seeking his blessing. In turn the Rebbe asked that the recipient give the equivalent in charity, thereby spreading the performance of the mitzvah. Jews and non-Jews, politicians and ordinary people: Everyone received an encouraging word, a specific blessing addressed to each person’s specific need.

My dollar bill also came with a blessing. At the time I was working for the Jerusalem Report magazine, and the Rebbe’s blessing to me was: May you report good news from Jerusalem.

This was no mere pious wish. The Rebbe, I understood, was giving me marching orders: In emphasizing the positive, I would not only be reporting good news but helping create it. In that deceptively simple message was a summation of the Rebbe’s work: his relentless emphasis on the positive as a self-fulfilling strategy, his challenge to each of us to become better versions of ourselves and above all, his insistence on messianic imminence – the ultimate good news from Jerusalem.

Why would someone like me, who was not a Hasid, faithfully carry for decades a dollar bill from the Rebbe? Why do I cherish the Rebbe’s dollar bill as one of my essential spiritual acquisitions?

Like so many Jews around the world, I wanted a tangible link with the tsaddik, the holy being who is a conduit for blessing. Distributing objects that establish such a link is hardly unique to Chabad or Hasidism but is an integral part of the mystical path generally. The dollars the Rebbe distributed were all newly minted, and this too hinted at their purpose: Untainted by other human hands, they could serve as a clear transmission of his blessing.

But there is a deeper reason why I cherish my tangible connection to the Rebbe: The dollar is a reminder of the man who embodied selfless service to the Jewish people, a tireless concern for the well-being of every Jew, regardless of background or belief. We love him because of his unconditional love for us.

After the Holocaust, Eastern Europe’s surviving Hasidic groups focused on rebuilding, each sect its own shattered world. The perceived precondition for the success of that mission was insularity. Jews outside their circle were at best irrelevant, at worst a threat. 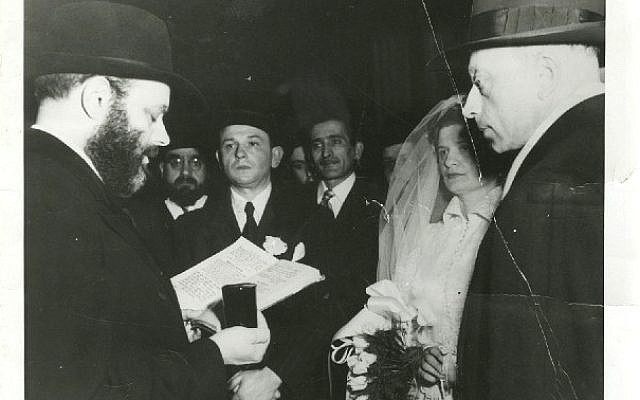 Rabbi Schneerson officiating at a wedding, circa 1951 (Wikimedia)

But Menachem Mendel Schneerson chose an opposite strategy. He transformed a small and shattered community of survivors living in a neglected corner of Brooklyn into a spiritual avantgard. For the Rebbe, the renewal of his community was only a means to the renewal of the Jewish people. And so he dispatched his followers to the farthest corners of the Jewish world. In setting a global mandate for itself, Chabad became the spiritual equivalent of political Zionism: a post-Holocaust rescue mission for the whole Jewish people.

The Rebbe’s sense of responsibility for all Jews is another way of understanding the dollars project, which allowed him personal contact with hundreds of thousands of Jews. Arguably no Jewish leader in history had more direct physical connection with as many Jews as did the Rebbe.

Today we take for granted the existence of Chabad houses in Bangkok and Dharamsala, to say nothing of Chabad outreach on American campuses. In fact there is nothing self-evident about young Hasidic couples leaving the insularity of their community and setting out into the open world. Chabad emissaries have become the most visible public Jews in the most remote places. And with the renewal of murderous anti-Semitism, that visibility has taken on an ominous significance. From Mumbai to Poway, Chabad is in the crosshairs.

Over the years I’ve had my disagreements with Chabad. I grew up in the Soviet Jewry protest movement, which the Rebbe strongly opposed, warning that a public campaign against the Soviet Union would endanger its Jews. I believe that history vindicated the protest movement. But if anyone had the right to criticize us, it was the Rebbe, who personally ran an extensive underground network in the Soviet Union. The reawakening of Soviet Jewry was catalyzed by the Six Day War and Zionist pride; but the foundations were laid by the Rebbe.

In fact Chabad’s great success in outreach around the world was first tested in the Soviet Union. The global outreach campaign was energized by the arrival in Crown Heights, in the 1950s, of survivors of the Gulag, men who had spent years in Stalin’s camps for underground Jewish activity. If Chabad has proven to be unstoppable, it is in part because its capacity for mesirut nefesh, self-sacrifice, was honed in the Gulag.

My disagreements with Chabad are hardly confined to Soviet Jewry. On religious pluralism in Israel, on territorial compromise with the Palestinians, on the role of women in Judaism – my worldview is very different from the Rebbe’s and his followers. And yet, when I’ve needed help in various places, I turned to the local Chabad emissaries, as though they were family members – which of course is precisely how the emissaries see themselves. It’s as if the Rebbe set out to counter the boundless and irrational hatred directed against the Jewish people in the 20th century, with a boundless and irrational love for every Jew, just for being a Jew. 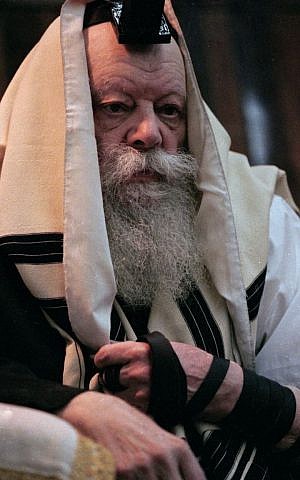 And what of the messianism? Was this the Rebbe’s great miscalculation, a fatal wrong turn?

In an interview in the 1970s, the great scholar of Kabbalah and Jewish messianism, Gershom Scholem, noted that so many upheavals had been condensed into the modern Jewish experience that we were due for another eruption of messianic expectation.

In fact we experienced two messianic eruptions at around the same time – the Gush Emunim settlement movement and Chabad’s “Moshiach Now” campaign. Ultimately Gush Emunim proved to be more concerned with politics than spiritual transformation; while Chabad remained in the classic messianic mode, seeking to change the world through the power of devotional acts.

Was the Messiah’s imminent arrival inconceivable? No more inconceivable, perhaps, than imagining that the nation that embodied European civilization would mobilize the elements of civilization itself – science, order, bureaucracy – for industrial genocide. And no more inconceivable than imagining that the most powerless people, at the moment of its greatest shattering, would reestablish a state in its lost land, regain military power and ingather its exiles. In that sense, “Moshiach Now” was simply Jewish history acknowledging the radical strangeness of our time.

The logic of Jewish history dictated that someone had to go for broke, remind us that this could be the moment if only we perform one more mitzvah, one more good deed that would tip the cosmic scale.

The Rebbe had taken on the ultimate task – not only to salvage the Jewish people but the world. Being a contemporary of the Rebbe, a witness to the messianic drama playing out at 770 Eastern Parkway, felt like a privilege. And what was he really up to with those dollars? Was he engaged in some elaborate Kabbalistic battle against the dark forces of materialism, trying to redeem the sparks embedded even in the almighty dollar, release the words inscribed on the bill, “In God We Trust,” and turn America’s heart toward higher aspirations? The very possibility was an indication of the Rebbe’s place in our imagination: If anyone was capable of waging cosmic war against evil, it was Menachem Mendel Schneerson.

Yes, the Rebbe was taking an enormous risk. Jewish history warns of the dangers in opening the way to ultimate hope, the consequences of thwarted expectation. What distortions in Jewish life would this messianic campaign bring?

Some Hasidim continue to believe that the Rebbe didn’t really die, or that he is about to be resurrected – surely an ironic turn in the history of Judaism. But that is a minority response. The real legacy of the Rebbe’s messianic campaign is the increased devotion and self-sacrifice of his followers, the intensification of their love for their fellow Jews, the spreading of kindness and good deeds.

When the Rebbe died in 1994, there were 1300 families serving in Chabad institutions around the world; today there are close to 5000.

There is a sequel to the story of my dollar bill. Not long ago I was in a taxi from Ben-Gurion Airport to Jerusalem. The driver told me that his brother was dying, and that he was rushing from one kabbalist to another seeking blessings. Then he said: If only the Rebbe were here. I wish I had a dollar bill from him –

I sensed what the Rebbe expected of me and pulled the dollar from my wallet. The driver kissed me and wept.

I didn’t keep in touch with him and so have no idea what happened to his brother. Chabadniks tell endless stories of miraculous healing via the Rebbe’s blessing. But the truth is, I don’t need one of those stories to know that a miracle happened in that taxi. Twenty-five years after his death, the Rebbe is still with us, connecting Jews and inspiring us to do better.

Recently I mentioned the story to a friend from Chabad. Afterward he showed up in my office with a dollar bill. Don’t worry, he said, I have 30 more. So now I have a new dollar in my wallet, and I believe that, however indirectly, this one too comes with a blessing from the Rebbe.

About the Author
Yossi Klein Halevi is a senior fellow at the Shalom Hartman Institute, where he is co-director, together Imam Abdullah Antepli of Duke University, of the Muslim Leadership Initiative (MLI), and a member of the Institute's iEngage Project. His latest book, Letters to My Palestinian Neighbor, is a New York Times bestseller. His previous book, Like Dreamers, was named the 2013 National Jewish Book Council Book of the Year.
Related Topics
Related Posts
Comments