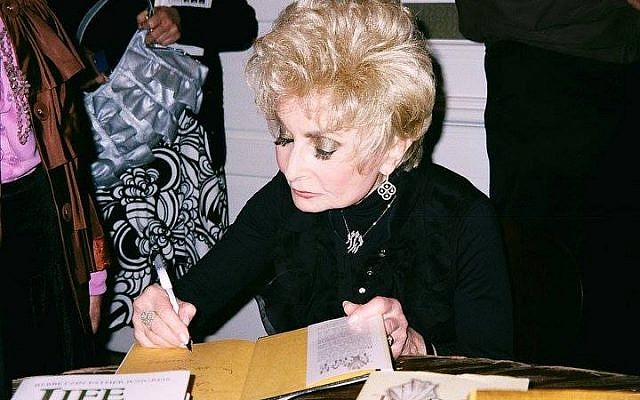 When I think of The Rebbetzin, there is only one. Rebbetzin Esther Jungreis, (1936-2016), OBM. Her very life, as a member of a celebrated rabbinic dynasty, a survivor of Bergen-Belsen, founder of HINENI outreach program, gives lie to the myth that Orthodox Judaism is antithetical to feminism (for lack of a better word) and at its worst, misogynistic.

The Rebbetzin swept past those prejudices and she did it with an Hungarian accent.

She delivered in excess of 200 lectures annually, wrote best selling four books, a weekly column in The Jewish Press.

She was charismatic, warm-hearted, indefatigable and fearless.
Her message was simple. In our fast paced and often lonely lives, confronted by conflicts and challenges, the answer is “Go to The Book”. The Torah. Go to The Book in order to live a fulfilled life. Follow the commandments. Marry. Have Children. Help others in need.

I first became aware of The Rebbetzin in 1973 while sitting in my mother’s sunny Teaneck, NJ kitchen and reading The New York Times. I noticed an article about a woman who had rented Madison Square Garden in New York for a rally.

I was intrigued and impressed by her ambition and although I didn’t go to the rally that day I never forgot about Rebbetzin Jungreis.

I moved to Florida a few years later.

In 1994, a group of residents founded Palm Beach Synagogue and soon our Rabbi, Moshe Scheiner, invited The Rebbetzin to join us for Scholar’s Weekends. She came every year until her passing in 2016. The following year we invited her daughter, Rebbetzin Slovie Jungreis Wolff, herself a celebrated speaker. She has been coming ever since.

There is no word in the Torah that signifies a more immediate commitment, devotion to and belief in G-d, than “Hineni.”

One of her most widely read books was “The Committed Life: Principles for Good Living From Our Timeless Past”.

“TorahTrue value of faith, truth, kindness and love permeate the pages of this book” and “In an age where most of us have forgotten what is truly important The Committed Life instills a renewed passion to reconnect to the values that really matter.”

She bought many messages to her listeners but among her primary message was one about tefillah.
Rabbi Steven Weil of the Orthodox Union describes tefillah as “self-analysis or self-evaluation” like a “person praying having a dialogue or conversation with God”.

When the Rebbetzin spoke about tefillah, her very words were a tefillah. When she addressed a large group, the listener often felt as if she were speaking to them individually. There was intimacy, passion and compassion in her words.

The Rebbetzin wrote the following (The Jewish Press, “Prayer is the Foundation” March 31, 2016):

In the very first parshah the Torah describes the creation of the world and the creation of man, the very crown of creation. We learn that though the seeds of all vegetation were in place, it was only after man prayed for rain that the seeds blossomed and bloomed.

This prerequisite of prayer is evident throughout our Torah and history. Our mothers – Sarah, Rivkah, Rachel, Leah – and many others were granted the berachah of children only after they prayed with all their hearts and souls.

This prerequisite of prayer holds true not only with regard to children but in every aspect of our lives. It was only after Moshe Rabbeinu, the greatest man ever to walk the face of the earth, turned to Hashem with intense, genuine prayer that Hashem forgave the nation of Israel.

G-d’s response was comprised of just two words, but those two words had and continue to have more power than the most deadly weapons mankind can devise. We are all familiar with those two little words. They are engraved on our hearts and souls; they are the pillars of Yom Kippur: “selachti kidvarecha” – “I [G-d] have forgiven even as you requested.”

Yes, prayer is the foundation, the ultimate defense weapon of our people. Our father Yaakov was endowed with this gift by his own father, Yitzchak, who proclaimed those words that identified us for all time: “Hakol kol Yaakov” – “The voice is the voice of Yaakov.” That voice is the voice of prayer. It is so powerful that it can pierce the bolted heavenly gates and ascend to the very Throne of G-d.

During one of her last visits to Palm Beach Synagogue, The Rebbetzin told the story of why she decided to hold the Madison Square Gardens rally.

She said that she had seen a need to reclaim Jewish youth drifting away from their heritage and believed urgent action must be taken.

She sought and received the blessings of several rabbis.

Still, there were doubts. Madison Square Garden had thousands of seats. Would the they be empty? Would her words fail her her?

She prayed that she would reach the hearts and minds of her listeners.

The Rebbetzin electrified her audience. The event was a resounding success.

Over the years her inspirational message has reached countless people. Many have said that she changed their lives.

She believed in inclusion.

“These modern-day manifestations have only created disharmony. I believe that every Jew is a Jew; we have one Shabbat, one God, one Torah and one faith.” (White Fire: A Portrait of Women Spiritual Leaders in America” (2002).

Her prayers were answered that day in 1973 and as a result, the prayers of many, whether they were aware of them or not were answered as well.