The Blogs
Harry Maryles
Apply for a Blog
Please note that the posts on The Blogs are contributed by third parties. The opinions, facts and any media content in them are presented solely by the authors, and neither The Times of Israel nor its partners assume any responsibility for them. Please contact us in case of abuse. In case of abuse,
Report this post. 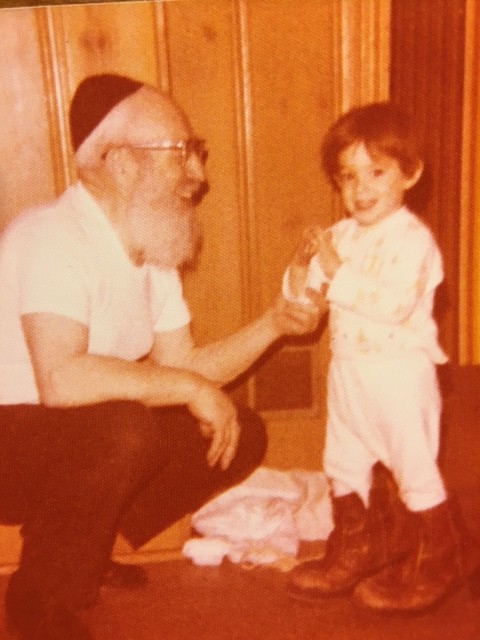 My father playing with a grandchild (circa 1975)

I cannot imagine what my father went through during the Holocaust. Which always comes to mind on Tisha B’Av. Which we observed yesterday. A couple of years ago I described the harrowing story of how my father lost his first wife, a brother, two twin baby girls and his oldest son. It can be read here – It is a riveting story – although I doubt that I did it justice. Here is the rest of the story.

The bunker that saved my father, his 2 sons, a brother, and about 40 other Jews during the Holocaust was in the basement of a home belonging to  a a righteous gentile. His name was Ivan Bur. It was sealed with a heavy cement cover. Which Ivan opened up every day to bring them food.

One day, the sound of gunfire on the outside was heard in the bunker. The people there had somehow heard that the Russian army was on the move towards Drohobycz which was the Ukranian town where the bunker was located. The Russians had finally arrived… and what they were hearing were the sounds of battle. But they couldn’t be sure. And they dared not try and find out since if they were wrong they would be discovered.

Meanwhile  Ivan had stopped bringing them any food. They suspected that something was up. Maybe Ivan was killed. If so, how would they survive? When the gunfire subsided, they decided to take a chance and leave the bunker. Without any food, it wasn’t really much of a choice. But the only exit was covered with a cement cover that was impossible to open form the inside.

My father was the ultimate improviser. He grabbed a beam from one of the beds and managed to pry open the cover. They all went outside to see what their fate would be. To their great relief, the Russians had liberated the town. When the Russian soldiers saw these Jews weak and debilitated, they helped them. They fed and clothed them and nursed them back to their health.

My father, his brother Yosef and his wife, and my two older brothers survived the Holocaust in that bunker. They were now free. But the war was not over yet. The Russians desperate for manpower drafted anyone in sight. Including my father.  He was sent to the battle front. Putting his life at great risk once again.

My brothers were still too young (they were about 12 or 13 years of age) to be drafted and were sent to a cousin living in Drohobycz which was trying to resurrect itself into the organized Jewish community it once was before the war.

The rabbinic leaders of that city were looking for a shochet, which my father had become just prior to the war. When they found out about my father, they somehow managed to get him to sneak out of his Russian army unit once a week so that he could shecht for the town. This went on for a while until one time he was caught by his commanding officer. Who was ready to court-martial him for going AWOL during the war, a capital offence.  My father told him his story of how he had lost his wife, a brother, and 3 of his children. This kind soul had mercy on my father and told to just go back to his unit.

At that moment my father made a snap decision. After losing so many members of his family – and with two young teenagers to care for, he did not want to end up as casualty of war on the battlefront — a highly likely prospect.

Instead of heading back to his unit, he headed back to Drohobycz. And immediately went to the rabbinic leaders he had shechted for and asked for their advice. They told him to grow a beard and change into Chasidic garb, and hide in plain sight.

The disguise was so successful that when that commanding officer came into town one day, he passed right by my father and did not say a word. There my father remained until after the war.

When the war finally ended, he had partnered up with another shochet in Krakow to open up a restaurant business where they would shecht their own steer. They both thought that they would go back to the life they had before the Holocaust. It was at about that time that my father was introduced to my mother. They were married shortly thereafter.

His time trying to rebuild his life in Poland came to an abrupt end when the Poles started to have pogroms against the Jews that came back after being liberated. That’s when my parents and two brothers decided they had enough of Europe. They approached the Joint Distribution Committee (JDC) who gave them passage to Paris and promised to eventually get them to New York, where my father’s maternal uncle, Binny Mendel Maryles lived. He had been living there since the 1920s working as a shochet. My brothers has gone ahead of my parents on an education visa to attend Torah VoDaath. But not before I was born in November of 1946.

Meanwhile the JDC procrastinated. My parents were anxious to leave Europe. Even though my father had been offered a job as a shochet in Paris, he did not want to remain in Europe at any price. He finally prevailed upon the JDC to come up with passage to New York.

He was on a visitor’s visa. After 6 months he had to leave the country. He first went to Toronto and then to Cuba. (I have no clue why he went there). From there he saw an ad in a Yiddish paper about the need for a chazan for a shul in Toledo.

He contacted the Mora D’Asra (Orthodox rabbi) of Toledo, R’ Nechemia Katz, and was hired immediately. Soon after he arrived he was also hired as one of the two shochtim there. My oldest brother Jack remained in New York during all that time and ended up studying music at Columbia. My brother Barry, who moved to Toledo with us was drafted into the army during the Korean war but served his stint in Germany. In the meantime Jack got a job as a chazan in Chicago. Barry followed and so did we eventually in 1962.  And I’ve been here ever since.

I don’t know how anyone can live through what my father did and remain sane. I know that he was affected by it for the rest of his life.  And yet he survived — remarried and lived a to enjoy a wonderful life in America having much nachas from his children and grandchildren. In 1974 my parents made aliyah and had enjoyed the best years of their lives for the next 18 years until his passing in 1992.

About the Author
My worldview is based on the philosophy of my teacher, Rabbi Aaron Soloveichik , and the writings of Rabbis Joseph B. Soloveitcihk , Norman Lamm, and Dr. Eliezer Berkovits from whom I developed an appreciation for philosophy. I attended Telshe Yeshiva and the Hebrew Theological College where I was ordained. I also attended Roosevelt University where I received my degree in Psychology.
Comments