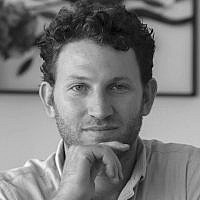 The Blogs
Aaron Kalman
Working for Israel and the Jewish People
Apply for a Blog
Advertisement
Please note that the posts on The Blogs are contributed by third parties. The opinions, facts and any media content in them are presented solely by the authors, and neither The Times of Israel nor its partners assume any responsibility for them. Please contact us in case of abuse. In case of abuse,
Report this post.

Last week the departure of one officer from the IDF marked not only the end of his personal military career, but also the end of an era for the entire Israeli army.

After 41 years in uniform, Major-General Gershon HaCohen was thrown a small goodbye party by the IDF’s top officers. The farewell toast was given by IDF chief Benny Gantz, and the room filled with memories and stories of the HaCohen — a modest and impressive commander.

HaCohen started his way in the infantry’s Nahal regiment, but soon after switched to the armoured corps, where he climbed the ranks. For the last years of his service HaCohen — who holds degrees in philosophy and comparative literature from Hebrew U — commanded the Northern Army and was in charge of the IDF’s military colleges. Additionally, he will be remembered for his job in the summer of 2005, when he was the officer in charge of implementing Israel’s disengagement from Gaza and removing all Israeli civilians from the Strip.

But last week’s goodbye toast was also the end of an era for the IDF: Drafted in early 1973, HaCohen was the last serving IDF officer to have fought in the Yom Kippur War. He did so as an infantry soldier in the Sinai where he battled the Egyptian forces.

The current commanders in the IDF don’t exactly lack combat experience: Gantz and the other senior officers fought in the first Lebanon war and spent 20 years fighting Hezbollah in southern Lebanon; the next generation of commanders gained experience fighting in the Palestinian refugee camps throughout the West Bank and Gaza; and in the past 10 years the IDF has once again fought in Lebanon and also entered the Strip on two separate occasions.

But being a soldier in the Yom Kippur War was something entirely different. Having fought in that war, and having chosen to remain in the IDF for 41 years, HaCohen was the last of a generation. He was the last active officer to see dozens of Israeli jets shot down by enemy fire; was the last member of the general staff to see Israel fighting on multiple fronts at the same time; was the last active IDF commander to have fought against Syrian troops on Syrian soil; and was the only active IDF commander to have battled the Egyptians.

In short, HaCohen was the last member of the IDF command to have witnessed Israel in an all-out state of war.

HaCohen’s departure also highlights the new forms of war Israel has had to face over the past 40 years, as the threats from traditional armies were gradually replaced by the threat of a continuous, asymmetrical war with terror organizations. The IDF generals didn’t watch Egyptian tanks cross the Suez Canal, but they saw Hamas and others use civilian houses to launch rockets and people blow up buses in city centers.

Sadly Israel’s wars didn’t end, they only changed shape. One can only guess that HaCohen’s input and judgement, based on his personal experiences defending Israel during full scale wars with standing Arab armies on multiple fronts, will be missed.