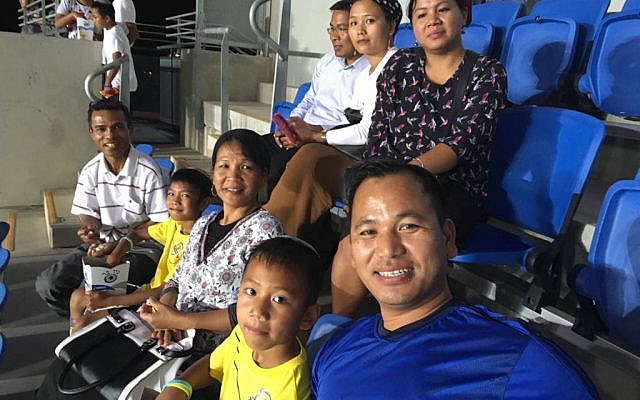 After the jealousy and deceit that we read about over the last few weeks, in Parshat Vayigash, all of Yaakov’s children are reunited. Yosef reveals who he is and does not hold a grudge against his brothers for how they treated him in the past.

According to Gur Aryeh, Yosef and Binyamin cried because they prophesied that in the future, the tribes would no longer be united and would be divided into two kingdoms: Yehuda (which would include Binyamin) and Yisrael (Yosef and the other nine tribes) and they would then be exiled. However, they would all eventually return to the land and be reunited as the prophecy says in Yirmiyahu 31:6-8:

For thus says the Lord; Sing with gladness for Yaakov, and shout on the hilltops of the nations: announce, praise and say, O Lord, save Your people, the remnant of Yisrael. Behold, I will bring from the north country, and gather them from the ends of the earth, and with them the blind and the lame, the pregnant and birthing together: a great company shall return here. They shall come with weeping and with supplications will I lead them. I will guide them on rivers of water, on a direct path, in which they shall not stumble: for I am father to Yisrael, and Efraim is my firstborn.

The kingdom of Yisrael is referred to as Efraim as most of the kings of the ten tribes in the Northern Kingdom were from the tribe of Efraim (who is considered to be Yosef’s bechor, firstborn, even though Menashe was technically born first).

The Haftara for Parshat Vayigash from Yechezkel 37 prophesies the future unification of the twelve tribes.

Thus says my Lord, Hashem Elokim: See! I take Yosef’s wooden tablet which is in Efraim’s hand, and the tribes of Israel his comrades, and shall place them with him together with Yehuda’s wooden tablet and I will make them one wooden tablet, and they shall become one in my hand…Behold! I take B’nai Yisrael from among the nations to which they went and I shall gather them from around and I shall bring them to their soil and I shall make them into a single nation in the land upon Israel’s hills and a single king should be for them as a king; and they shall no longer be two nations, no longer divided into two nations again…(Yechezkel 37:19-23)

Part of this prophecy has come true. The kingdoms of Yisrael and Yehuda went out to exile. Some of the Jews came back to build the Second Temple and were exiled again when it was destroyed. Now after two thousand years, the Jewish people are returning to their land. There is a dispute as to whether only parts of the kingdom of Yehuda have returned or if parts of the kingdom of Yisrael have returned as well.

Which of the lost tribes have come back to Israel?

So far, the following groups have been recognized by the State of Israel as lost tribes and are eligible to make aliya: Bene Yisrael (1964),  Bnei Menashe (2005) of India and Beta Israel (1973) of Ethiopia (who believe that they are from the lost tribe of Dan).

May we continue to search for the missing tribes and may all of the Jewish people have the opportunity to once again be reunited in the modern State of Israel.