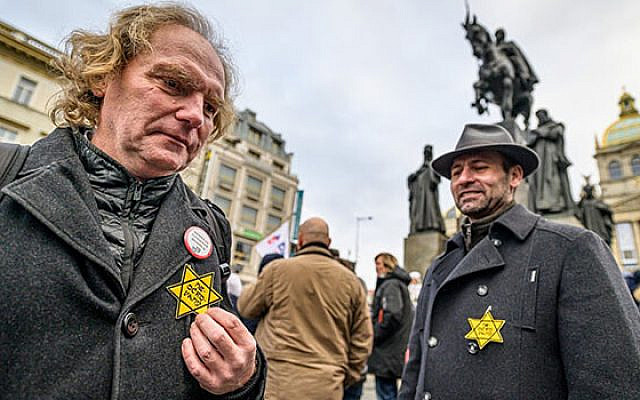 Protesters in Prague displaying their yellow Star of David patches that say "unvaccinated" on January 8, 2021 (taken from Romea.cz)

In 21st-century Europe, yellow Star of David patches have reappeared. Prague is the latest country to see this reappearance this past weekend among protesters demonstrating against the vaccine campaign while proudly adorning yellow Stars of David with the word “unvaccinated” printed on them as a sign of their persecution at the hands of the government, since they do not want to be vaccinated.

As a former Combating Antisemitism intern for the World Jewish Congress, I have written many reports over the past seven months about the prevalence of antisemitism in the ideology of various groups as well as in the countless attacks that have occurred across Europe; from cemetery vandalism to outright violence against members of Jewish communities.

Just two days ago, the Auschwitz Memorial and Museum Twitter account reported that the exterior walls of the Oświęcim Jewish cemetery, the city that had a vibrant Jewish community for centuries until the Nazi regime established the largest concentration camp in the Reich there and renamed it Auschwitz, had been vandalized with a swastika and “other Nazi symbols”. This heinous act was most likely committed by a local or native to the general region, due to the current lockdown in Poland, despite the fact that Nazi policy viewed all Slavic peoples as members of the bottom inferior races, slightly above the “Jewish race” in the hierarchy of inferiority.

Since the onset of governmental restrictions meant to limit the spread of the COVID-19 virus and protect the general population from the disease, people around the world have equated these measures with the mass genocide of European Jewry.

In May 2020, Munich already had to ban the use of yellow stars resembling those forced upon Jews across Nazi-occupied Europe, with some variations depending on the region, in anti-pandemic and anti-vaccine protests. Some protestors even held up signs that read “vaccinations will set you free?” in German while wearing striped prisoner uniforms. Far-right political parties in Greece already had an “antisemitism problem” with the Golden Dawn party rallying openly as a neo-Nazi group that vowed to keep the country “pure”, free of Jews and immigrants. Luckily, it was condemned as a criminal organization this past October after many years of participating in Greek political discourse.

Nonetheless, the riot at the US Capitol certainly demonstrated to other far-right groups around the world that in some sense, despite the loud outcry from opposers on both sides of the political aisle, this sort of behavior was allowed and is somewhat accepted by people who would consider themselves “normal” rather than “fringe”. Even more frightening, although not surprising, is that very few people have spoken up against the blatant antisemitism that the Capitol rioters and the far-right wing at large support, aside from the one man who blatantly wore a “Camp Auschwitz” sweatshirt.

The US is no stranger to antisemitic attacks, from the left as well as the right, and seems to publicly trivialize the Holocaust more frequently than its European counterparts, who would not as easily give it a free pass due to the historical sensitivity of the topic in the countries where it took place. Arnold Schwarzenegger even compared the riots to Kristallnacht (the orchestrated riot against the German Jewish community that destroyed hundreds of synagogues, schools, businesses, restaurants, and other Jewish-owned property in 1938), which the media seems to perceive as an acceptable comparison.

In the name of Palestine, kosher stores and synagogues have repeatedly been targeted for years around the world, including in the US and during Black Lives Matter protests. The latest vandalization came in yesterday at Shalom Y’all (which doesn’t openly call itself “Israeli” for fear of political backlash) in Portland, Oregon. Even before the Capitol riots, the website of a Jewish school in New York was hacked in December and displayed horrific Nazi propaganda on the website’s front page in addition to terrifying messages sent to the school’s contact list and calling for the destruction of the Jewish State.

As many online Jewish activists have said over the past year, everyone hates Nazis and white supremacists…until it’s time to stand up against them because of their antisemitic beliefs or to defend Jews against them. Nonetheless, I don’t see this solidarity with the Jewish people manifesting any time soon since antisemitism has woven itself quite craftily into the fabric of both the left and right-wing, either as “activism” or “logic”. I think it’s safe to say that the worst of antisemitism in the US is yet to come and we might end up seeing yellow stars arrive as a “form of protest” on the streets of America the Beautiful soon enough.