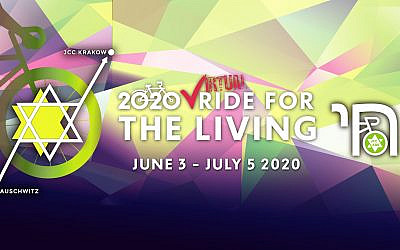 For the past seven years Jews and non-Jews from all over the world have participated in one can say without exaggerating the most inspiring bicycle ride in the world! Ride For The Living, a 60 mile one day ride from Auschwitz Birkenau to the JCC of Krakow, is literally a journey from death to life, from destruction to a new beginning. Starting in 2014 with just 15 riders, myself included, the idea emerged after a young man, Robert Desmond rode his bike along the path of World War II liberation, from London to Auschwitz to raise awareness about the Holocaust. He finished his 1350 mile trek at the death camp and then came to Shabbat dinner at the Jewish Community Center in Krakow.

Robert was surprised to learn that today, 75 years after the Holocaust, and after 50 years of communist rule, Jewish life has somehow miraculously survived and is even growing in major cities in Poland. When we suggested to Robert that his journey was incomplete and would only be truly complete when riding from Auschwitz to the revived Jewish community in Krakow, he readily joined and RFTL was born. 15 of us made that inaugural ride and enough money was raised that JCC Krakow was able to bring thirty Krakowian  Holocaust survivors on a free trip to Israel. It was a remarkable experience. 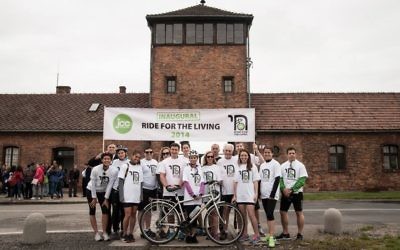 In the subsequent years the trip grew in numbers and more importantly, in meaning. People who were planning a heritage trip to Poland to visit cemeteries and commemorate the loss of their loved ones began considering the addition of a ride which also supported the revival of Jewish life—taking care of the survivors that stayed in Poland and making a statement that Poland was once again becoming a place of Jewish life.

In 2016, Marcel Zielinski heard about the ride and joined first as a regular participant but today as our Honorary Grand Marshal, and he hasn’t stopped riding since! Marcel is 85 years young and a survivor from Auschwitz who on the day of liberation began walking the 60 miles back to Krakow looking for his family, all but one having been murdered.  He told us that he could think of no better way to memorialize his family who perished as well as defeat the Nazis in their quest to annihilate Jews and Judaism, than returning with his children and grandchildren and riding the same path he walked, but this time towards rebirth, revival and rejoicing! 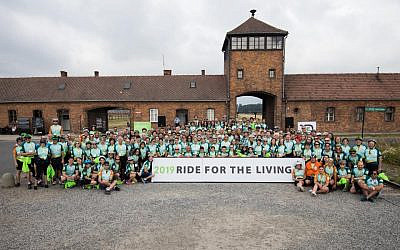 Over the years we have grown to almost 300 riders including the chief rabbi of Poland, the U.S. Ambassador to Poland, a three time Tour de France champion, a Nobel Laureate, an Israeli cycling champion, an Olympic cyclist and even a second survivor of Auschwitz, Bernard Offen, who rode last year at age 90! Young Polish Jews who in the past decades have discovered their Jewish identity are joined by hundreds of supporters from around the world who realize that a great way to memorialize the past is to ensure a Jewish future. 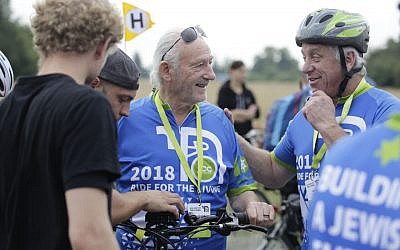 This year was going to be the biggest group ever but alas, corona had changed ours (and everyone in the world’s) plans. Realizing that nobody would be allowed to visit Poland this summer and participate in the Ride physically, the staff of JCC Krakow came up with a new plan—VRFTL—Virtual Ride for the Living. These days everybody is alerted to the need to exercise and what better way than to register for VRFTL and commit to riding, walking, or jogging the 60 miles (or more, or less) over the next month in support of Jewish life and memory in Krakow and in support of the survivors still living there today.

While the ride usually involves a financial commitment to support Jewish life in Krakow, this year registration is free! Those who want to support may do so, others can simply sign up and become a ‘virtual RFTL’er’.

Registering is as easy as filling out this form (takes 3 minutes https://form.jotform.com/201182674107046) – and while you’re at it, you can opt in to get a special VRFTL cycling jersey. You can also share the news as for anyone who gets at least 18 other people to sign up, they’ll receive an additional RFTL jersey for free.

This year I won’t be riding from Auschwitz to Krakow but honoring the survivors and supporting Jewish life is still on my agenda! I and my entire family will be virtually riding in support of Marcel and Bernard, in support of young Jewish men and women, in support of the new preschool, Frajda, which is bringing more Jews back to Judaism in Poland and in memory of our loved ones who perished in the Holocaust.

Please join us. The ride is virtual but the journey is real. 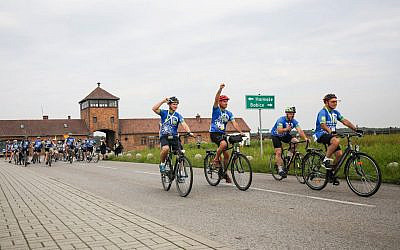