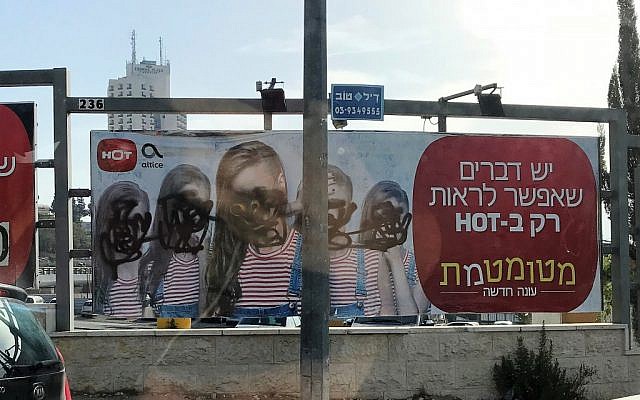 Driving to Jerusalem for work never gets old. Despite the ever-increasing traffic, and even after 15 years, I am still regularly amazed that I have the privilege to work in our beautiful, extraordinary, holiest of cities. Oh, and a highly imperfect one, at that.

Unless you’ve been living under a rock, you must know that conflict is never far in these parts. Everything, from politics to religion to social justice and more is fiercely debated by an ever-increasingly polarized society, with religious beliefs often being at the core of such debate. Even — or should I say especially? — within the Jewish community itself.

One particularly hot-button item revolves around the strange emerging culture of “erasing” women among many in ultra-Orthodox circles. This relatively new concept of not publishing photos or even drawings — or sometimes even the first names — of women, has its roots in modesty strictures. As it’s been explained to me, it’s out of “great respect for women” who are “a precious jewel to be protected and not shown off.”

Frankly, if someone wants to feel like a protected jewel that’s fine with me; they can keep their own likenesses and names out of publication. But who are you ‘protecting’ when you impose this manufactured stringency on other people? 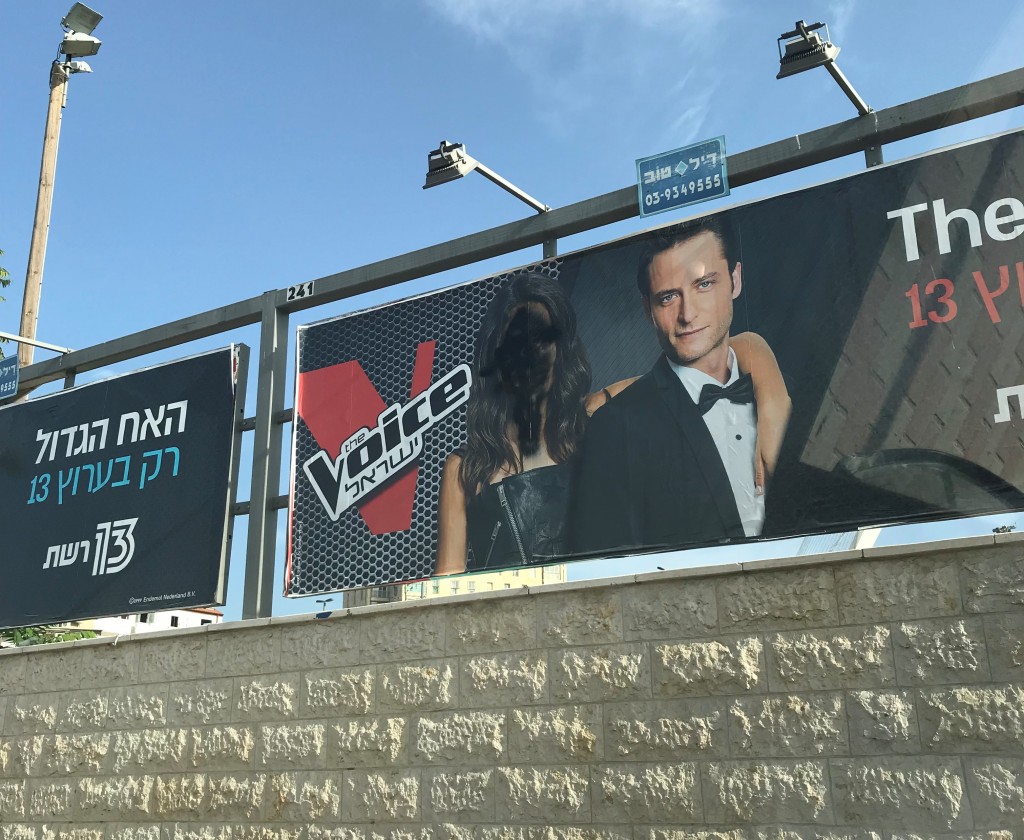 And then there are those who take these extremes, to, uh, the extreme. Such as the brand new billboard signs I noticed along the highway in Jerusalem during my daily commute. To my dismay, they were freshly vandalized to remove any trace of women’s faces. Some were painted over, others were literally peeled off.

Of course, I have no idea who did it, and I’m not accusing anyone specific. I do know that there are incredibly extremist attitudes about images of women, and that threats to businesses, and widespread vandalism of signs on buildings, buses, etc., have taken place from within Haredi elements as a result of posting images of women and girls. So, yes, I have drawn general conclusions…

However, the point is not the specific vandals. Of course they should be held accountable, whoever they are. They should be caught and prosecuted to the fullest extent of the law.

What is alarming to note is that this was no childish prank; it was a deliberate, well-planned, labor-intensive, specific defacement. And it didn’t occur in a vacuum. 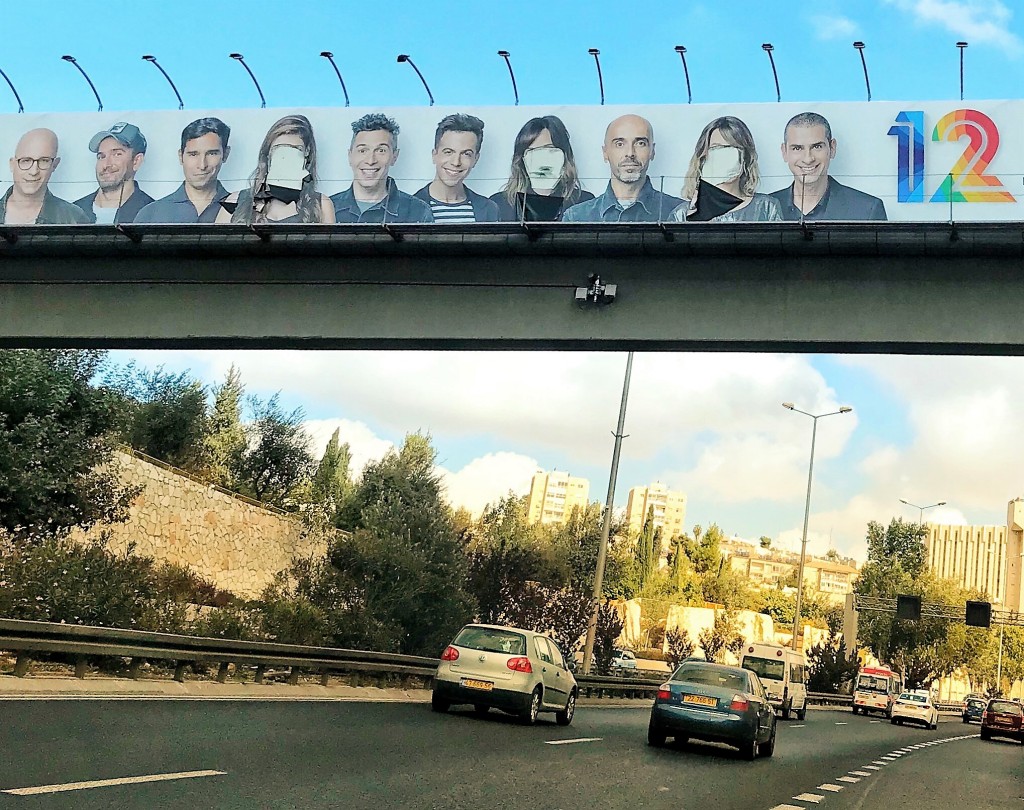 Billboard across the Begin Highway in Jerusalem. (Laura Ben-David)

A friend of mine who has not been following the issues saw the pictures I took and had the following insight: “It took a couple of minutes to really look at the billboards and while I’m not up to date or clear on what is happening or why this is happening, my impression is that they are trying to remove only the faces, implying, to me at least, that women are some sort of non-entity. No power, no personality, just body parts.”

It doesn’t take rocket science to understand where this comes from. Efforts are being made to encourage ‘holiness’ where there is none. How is it holy to teach that women and girls should not be seen? A climate of unsettling attitudes toward women is growing, and thus we are seeing a most unholy reaction.

It is the climate that allows for this, encourages it; and it is the climate that we must address. The leaders must understand that in their quest for righteousness, a warped sense of women and girls is emerging. They must rethink how they are teaching their followers. They must reevaluate the lessons that are being heard, even if they are not the words that are being spoken. 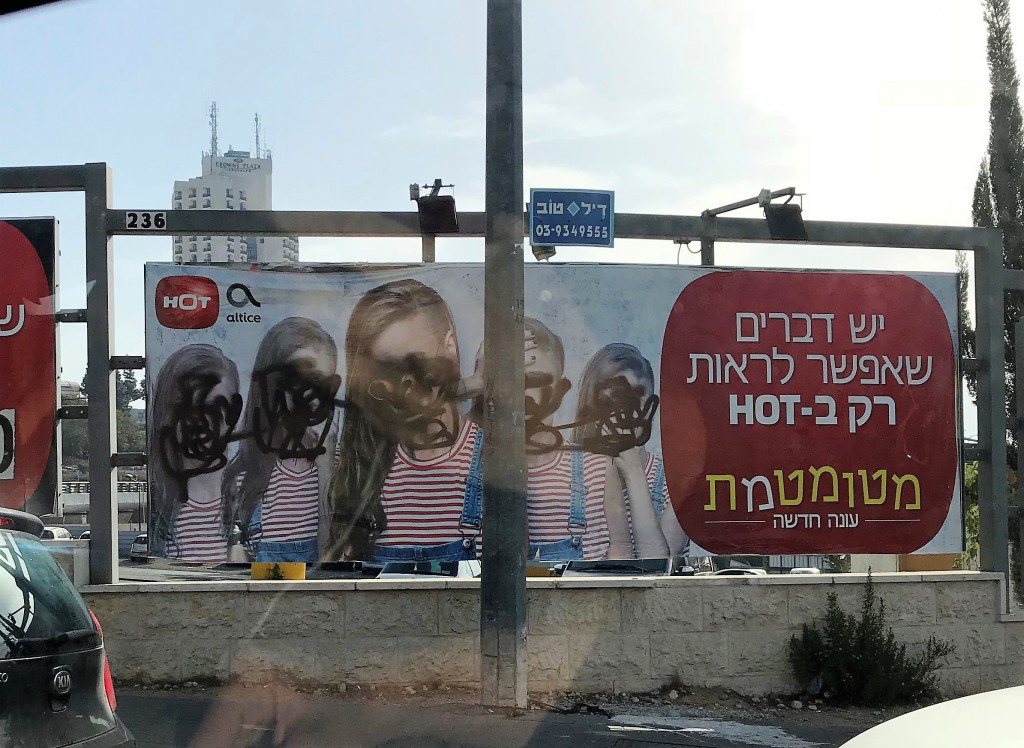 It’s not just the religious leaders; the powers-that-be must take a heavy hand in enforcing this criminal — and demoralizing — activity.

I truly believe that it’s a small minority who vandalize. But the climate that leads to it is NOT small. And this, unfortunately, is nothing new.

While I understand the “precious jewel” concept, and believe it was initially coming from a good place, it has rapidly deteriorated to have nothing to do with modesty and everything to do with power and control.

I found an interesting irony which put the smile back into my commute. I noticed that when they peeled off the faces, on one of the signs, they inadvertently exposed the face of Golda Meir; a woman more powerful and deserving of more respect than the vandals can ever hope to be… 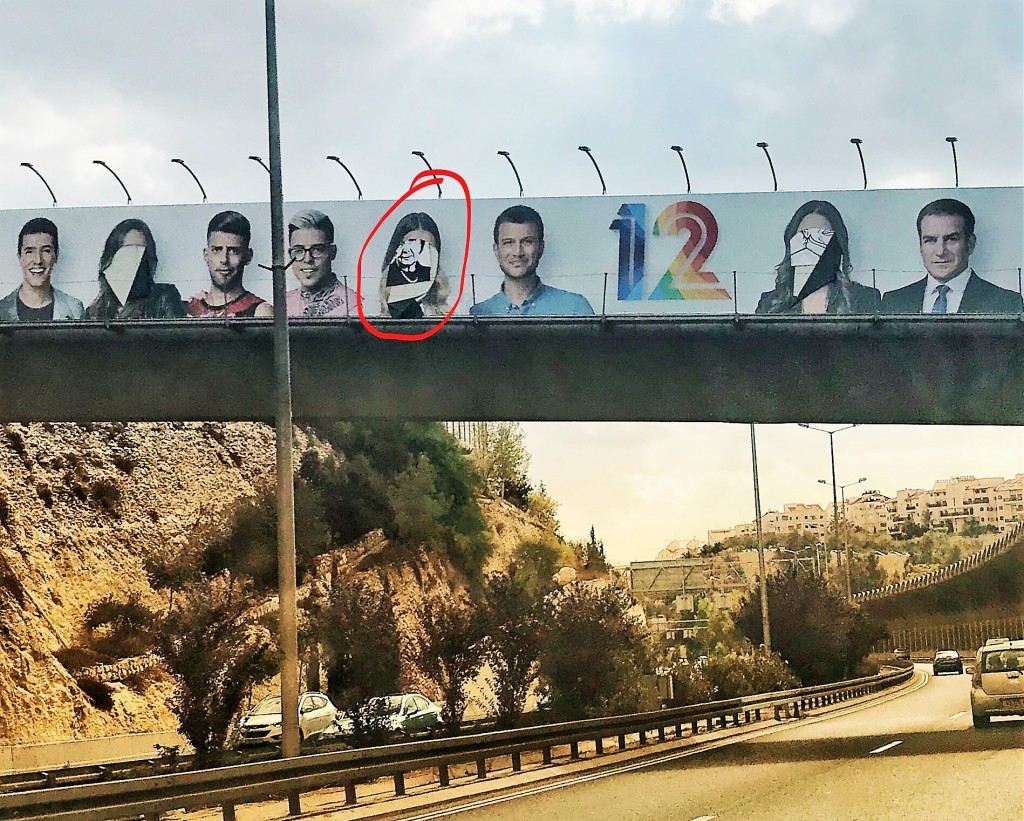 Indomitable Golda Meir; a little vandalism won’t stop her… (Laura Ben-David)
About the Author
Laura Ben-David is a photographer, public speaker and Israel advocate. Inspired by her Aliyah experience, Laura began writing and never stopped. She is the author of the book, MOVING UP: An Aliyah Journal, a memoir of her move to Israel. She has spoken all over the world about Israel, Aliyah and other topics, often with beautiful photographic presentations. Formerly the head of social media at Nefesh B'Nefesh, Laura is the director of marketing at Shavei Israel as well as a marketing consultant.
Related Topics
Related Posts
Comments
Advertisement