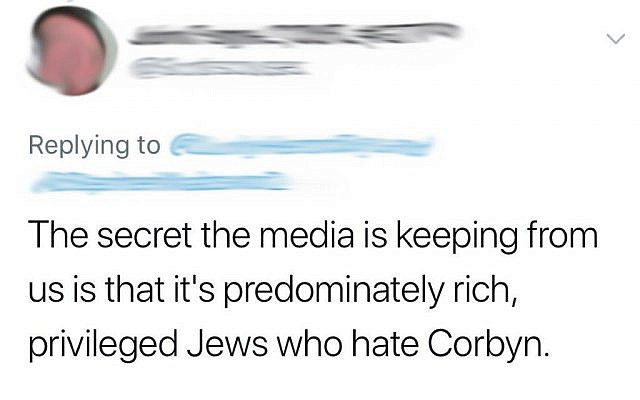 There are three statistics in the new report released by CST this week that, combined, tell us a lot about why last year saw another record total for antisemitic hate incidents in this country.

First, the number of online incidents reported to CST rocketed, from 384 examples of online hate in 2018 to 697 in 2019. Almost all of these took place on social media, where antisemitic tweets, posts and comments fly back and forth in the heat of argument.

Third, the number of incidents recorded by CST in Westminster and in Liverpool went up: Jewish Labour MPs, especially female MPs, were regular targets for abuse and hatred throughout 2019.

Put these three phenomena together and you get a snapshot of how the combination of social media and political argument fuelled antisemitism in Britain last year.

Of course this is not the full story. As well as a record number of antisemitic hate incidents online, CST also logged its highest-ever total for physical assaults last year. Jew-hatred still plays out on the streets, in verbal abuse and physical confrontations, just as it always has, and often has nothing to do with political events either in Westminster or in Israel.

CST’s report shows that conspiracy theories about Jews (sometimes cast as ‘Zionists’, ‘Israel lobby’ and so on) are found on the far right and far left, and are more common than any individual political ideology in the language used by incident offenders. Typically, when conspiracy theories and the scapegoating of minorities rise in popularity they usually reflect deeper divisions and anxieties in society. This is no different, and the Jewish community is not the only minority to suffer as a result of the tensions that have emerged in this country in recent years.

If, as CST’s figures suggest, the issue of antisemitism in the Labour Party has been one of the drivers of antisemitism in this country in recent years, then it may be hoped that the General Election result could kickstart its decline. While this would certainly be welcome, it is unlikely to happen quickly. Once a kettle has boiled, the water stays hot for a long time after the power is switched off. This problem has been building for years, and it will probably take a similar amount of time for it to recede.

2019 was the fourth in a row that the number of antisemitic incidents reported to CST went up, and the past four years have seen antisemitism and the fate of British Jews become a national political issue and a regular media story. You can look at this in two ways: either it has brought unwanted attention onto the Jewish community and stirred up feelings and views that we thought had been consigned to history; or it has allowed us to see those attitudes with full clarity, while helping to gather new friends and allies from across society.

DaveProbably both are true, and it is definitely the case that there are more people in this country who are aware of antisemitism, consider it a problem, and are thinking about the welfare of British Jews, than was the case a few years ago.