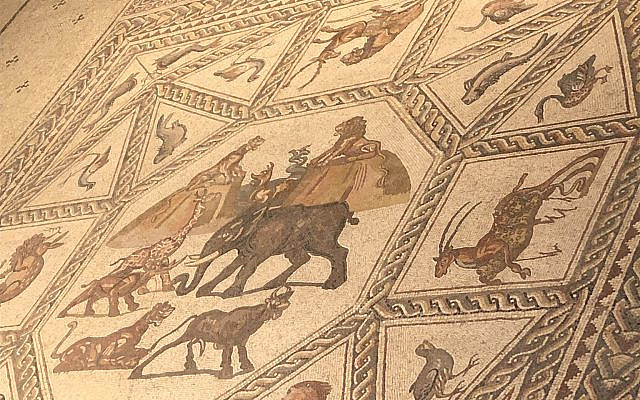 Generous American donors have provided the money to build a museum honouring Shelby White and Leon Levy, to house in situ the huge mosaic dating from the Roman occupation of ancient Judaea. The town of Lod (Lydda) has been inhabited for millennia, and is mentioned in the Bible (the book of Nehemia) as Bikat Ono, where Sanblat of Horon offered to meet Nehemia. During the Hasmonean revolt, which began in nearby Modiin, Jonathan the Hasmonean liberated Lod from Hellenic rule. During Herod’s rule Lod continued to serve as a metropolin centre, known by the Romans as Diospolis (city of the gods), playing an important role until the destruction of the Second Temple.

Under Byzantine rule Lod became an important centre of Christianity, serving as the residence of prominent bishops and where one of the earliest churches, dedicated to the town’s patron saint, St. George (of dragon-slaying fame), was constructed. The town is shown on the Medeba map, where it is given its three names, Lod, Lydda, Dispolis. In the seventh century C.E. it was conquered by the Moslems, who built the new town of Ramle close by. Today the two towns form a conurbation. In 1948, following the War of Independence, it became part of Israel.

In 1996 the mosaic was discovered by chance in the course of construction work in the town intended to widen one of the roads. When fully exposed, the mosaic – one of the largest ever found anywhere in the world – was identified as dating from the late third or early fourth century C.E. It measures seventeen meters long and nine meters wide, and is perfectly preserved almost in its entirety, depicting animals, fish and fowl both local and from Africa. It is not known who was the wealthy Roman who owned the grand house in which it formed part of the floor of the main reception room.

After its discovery the mosaic travelled extensively, being exhibited in some of the foremost museums in the word, including the New York Metropolitan Museum, the Paris Louvre, the Alter Museum in Berlin and the Hermitage in St. Petersburg. The Mosaic Museum in Lod has been built expressly to display the mosaic to its best advantage, with a raised viewing parapet enabling visitors to inspect it at close quarters and from every angle.

During our visit to the museum, our guide, a local Arab resident wearing traditional garb and speaking fluent Hebrew, pointed out the salient details of the mosaic’s colouring and composition, as well as demonstrating to us, with the aid of plaques on the wall, the process of layering that preceded the final stage of its construction. She mentioned with regret that at the time of the riots two years earlier, in 2020, involving the inhabitants of Lod-Ramle and other towns with mixed Jewish and Arab populations, the exterior windows of the museum were damaged, but the interior of the museum remained unharmed.

A series of displays in an interior wall displays scenes of the history of the town of Lod from ancient times to today. Surprisingly, the final display is set in 1935 and shows a plane of the ‘Palestine Airways’ landing in Jordan. There is an empty space beside it, and I personally hope that a depiction of the modern town, which is in Israel, will take its rightful place there and that this deficiency will be amended.