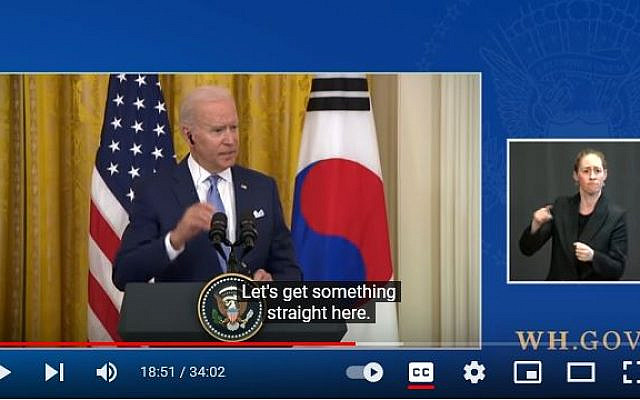 President Biden at a press conference on May 21, 2021, responding to a reporter’s question about the Israeli-Arab conflict. Recording time: 18:51 minutes.

“Let us get something straight here. Until the region says unequivocally that they acknowledge the right of Israel to exist as an independent Jewish state, there will be no peace”. This was President Biden’s straightforward response to a reporter’s question following the latest conflagration between Israel and Hamas in May 2021.

This is the true root of the problem and not the “occupation”, which for a common person began in 1967 and for the anti-Semites disguised as anti-Zionists began in 1948, with the establishment of the State of Israel (for them, only the Jewish people do not have the right to self-determination).

The Muslim opposition to an independent Jewish State in the biblical Land of Israel (aka Palestine) is rooted in the religious teachings of Islam. Since the 7th century, as Arabs conquered vast lands in their expansion from Mecca, in Saudi Arabia, to the whole Middle East and the Mediterranean countries in Northern Africa, a doctrine was developed whose basic tenet was, and still is: lands conquered by Muslims belong to the Umma (the Islamic Community) and cannot be surrendered. Never. Non-Muslim residents in these lands can, at best, achieve the status of “dhimmi” – if they are “People of the Book” (Jews and Christians). Members of other religions were less fortunate: for them the options were conversion, expulsion or death.

The “dhimmi” status was formally bought by paying a special tax (“jizya”) that granted personal security (protection from the mob) and basic religious autonomy in return for constant submission. Submission was expressed in a variety of ways. Dhimmis could not testify against a Muslim in a court of law. Murderers of dhimmis were rarely punished, as they could justify their acts by accusing the victims of blasphemy against Islam. The case of a Pakistani Christian woman, Aasiya Noreen, is well known: In 2010 she was convicted of blasphemy by a Pakistani court and sentenced to death by hanging. Public degradation and humiliation of dhimmis was commonplace. At times and places, dhimmis were required to wear special badges (yellow for Jews) and were barred from riding horses, considered too noble for dhimmis, and restricted to using donkeys. The threat of violence, individual or collective, against “dhimmis” was always present, and oftentimes actually implemented as a reminder of their inferior status. Just to indicate a few modern events prior to the establishment of the State of Israel: In June 1-2 1941, a pogrom in Baghdad, Iraq, ended with over 180 Jews killed and around thousand Jewish homes destroyed. In November 5-7 1945, a pogrom started in Tripoli, Libya, and quickly spread to neighboring cities: at least 130 Jews were killed and hundreds of Jewish homes were pillaged or destroyed, including nine synagogues. In December 1947, in Aleppo, Syria, anti-Jewish riots resulted in some 75 Jews murdered and several hundred wounded. Ten synagogues were destroyed.

The “dhimmi” condition in the Islamic world, a state of constant legal, social and psychological submission, is often ironically hailed as an example of benign “tolerance” of the Islam towards the Jews.

Jews lived in the Middle East – and not only in the Land of Israel – well before the Arab conquest of these lands in the 7th century. The Jewish community in Iraq had existed for 2,500 years, since the Babylonians conquered Jerusalem in 586 BCE and forcedly exiled the Jews to Iraq (then Babylonia). Jews lived in Aleppo and Damascus, Syria, for more than 2,000 years. A large Jewish community lived in Libya for more than 2,000 years (the Jewish revolt in Cyrenaica (Libya) against the Roman Empire in years 115-117 CE is well known.). The Jews are an indigenous people in the Middle East.

The Jewish communities in these three countries – 150,000 Jews – were eradicated in just three years, between 1949 and 1951, dispossessed and expulsed, ethnically cleansed. They were a civilian and defenseless minority. And so was the fate of the Jews in Yemen, who lived there centuries before the birth of Islam: 50,000 Yemenite Jews were airlifted in 1949-1950 to Israel, after having endured the harshest aspects of Islamic “dhimmi” practices, including the forced conversion to Islam of Jewish minors, reimposed in the 1920’s.

In the 20th century, in less than one-generation time, 870,000 Jews living in the Arab countries – from North Africa to the Middle East – were ethnically cleansed. In 1948 there were around 300,000 Jews in Morocco. Today, there remain only 2,000. Most of the Moroccan Jews sought refuge in Israel: The State of Israel is home today to about half a million Jews of Moroccan descent. No one in the West wants to mention nor talk about the Jewish refugees from the Arab countries: it is a cause of discomfort and does not fit the predetermined ideological conceptions and frameworks.

Jews are “dhimmis”.  In the Western world every human being has inherent human rights. “Dhimmis” have no inherent human rights: they are given limited rights by the Muslim rulers at the rulers’ discretion and these rights could be taken away at any time and place. This doctrine is inculcated to children in the Islamic world, and what is taught to kids from young age is difficult to erase. It stays as such unchanged (“the Hamas doctrine”) or rationalized in or merged with Western-palatable ideologies (“Israel as a colonial-settler enterprise” or “the right of return”).

The medieval doctrine of Islam regarding “dhimmis” is still entrenched in the Islamic world of today. However, we can see a ray of hope for change in the “Abraham Accords” signed in 2020 and the relationships being developed lately between Israel and the United Arab Emirates, Bahrain and Morocco.

If President Biden’s present trip to Israel and Saudi Arabia will promote the dialog and relations between Israel and the Arab countries in the region in the spirit of the “Abraham Accords” – it will be his best contribution to peace in the Middle East. The much-touted direct flight between Tel Aviv and Jeddah of US Air Force One does not count as “promoting the spirit of the Abraham Accords”: It will simply be a courtesy gesture of Saudi Arabia towards the President of the United States.

For more information about these subjects the reader is referred to my latest book “Ethnic Studies in K12 schools: The Jewish module”. The complete book can be downloaded for free at:

The book is also available at Amazon in digital (Kindle, Tablet, Phone) and paperback formats.