A detailed account of the last week’s nuclear talks with Iran appears in “How Iran Talks Came Back From Verge of Collapse” by reporter Laura Rozen in yesterday’s al-Monitor. After interviewing several diplomats and behind-the-scenes sources, she presents a picture of negotiations that were deteriorating if not for the leadership role of the EU’s Catherine Ashton and the praiseworthy skills of American negotiator Wendy Sherman. At the end of the day, Ashton said the talks were “constructive and useful.”

But there are several very troubling passages in Rozen’s report. In fact, they’re downright scary.

European Union Foreign Policy Chief Catherine Ashton and Iran’s chief nuclear negotiator Saeed Jalili kicked off the first international nuclear talks in over a year with a three-hour dinner at the Iranian consulate in Istanbul Friday night. The mood at the informal dinner—meant to build rapport between the two chief negotiators ahead of the formal talks getting underway the next day—was described by aides as “good and friendly.” Conversation deliberately steered away from specific discussion of the Iran nuclear issue.

So, what did they discuss?

A European diplomat apprised of the conversation told me Monday that they discussed political-party funding in the US among other topics, including the Arab spring. (emphasis added)

Later in the article, the diplomat adds:

Ashton has earned “a status as a genuine, open-minded but tough—thinking negotiator who the Iranians trust and are willing to deal with.”

Actually, Ashton has earned her reputation as a strong critic of Israel and the IDF. She has consistently used her post as the EU’s “foreign minister” to press for Palestinian positions and to make “even-handed” remarks when commenting on Israeli reactions to terrorist attacks. 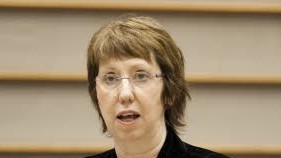 'Of course the Iranians will trust her.' Catherine Ashton (photo courtesy EU)

That’s why her three-hour dinner with Iran’s negotiator is troubling. With no discussions of the Iran nuclear topic, they had a “good and friendly” conversation about “political party funding in the US,” among other topics. Considering the two personages one can surmise that they were talking about their shared perceptions of Jewish political influence in the US.

Of course the Iranians will “trust” her.

Engaged? Get a room!

Other sections of the Rozen article describe the P5+1 negotiators as hopeless in their naivety and faith in negotiations with Iran. They actually admit measuring Iranian “body language” as a positive indicator:

“The morning session was very positive: the vibe in the 3+3 was wow, they are engaging… we know what the principles are,” the Western diplomat said on condition of anonymity. “But let’s not get excited: it’s going to be a bloody long road for them to negotiate, a long and painful process…”

Despite the lack of a U.S.-Iran bilateral meeting, the Iranian delegation was engaged and attentive when Sherman directly addressed them during the morning session, several diplomats said. “The Iranian delegation body language when Wendy spoke was direct and engaged,” the European diplomat said. (emphasis added)

According to Rozen’s account it wasn’t Iran that delayed the next set of talks. Washington wanted May 10, but It didn’t fit into Ashton’s schedule before May 23!

“Finally, in one-to-one negotiations, she [Ashton] headed off unrealistic Iranian demands and got everyone to agree … that a next meeting had to be held; and crucially … that it had to take place quickly so as not to drag this process out more than it needs to,” he [the European diplomat] said. Indeed, the next Iran nuclear talks, scheduled to take place May 23 in Baghdad, is a couple weeks later than the Americans had hoped, diplomats told me. (Washington had been hoping for a May 10 meeting date.) But Ashton’s schedule could not accommodate one before then. (emphasis added)

It certainly sounds like the Iranians got several “freebies” out of their weekend in Instanbul.

About the Author
Lenny Ben-David served as a senior Israeli diplomat in Washington. He is a public affairs consultant, writer, researcher, editor, and historian of early photographs. Ben-David is the author of "American Interests in the Holy Land Revealed in Early Photographs." He worked for AIPAC for 25 years in Washington and Jerusalem.
Comments