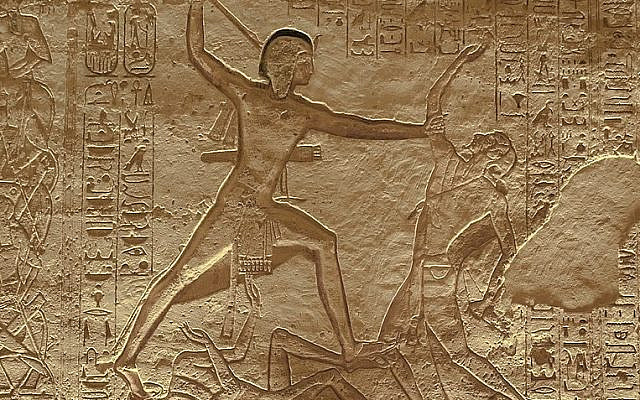 The first words ever written were rife with propaganda. Early Sumerian folklore, like the 4,000 year-old Epic of Gilgamesh, must be read on at least two levels: one that praises the accomplishments of the ancient heroes they name, and one that uses those heroes pragmatically to justify the ideology of the reigning monarch. Great histories as well must require not just a grain of salt, but often quite a bit more.

For example, to hear the Pharaoh Ramses II tell the tale of the monumental Battle of Kadesh—the world’s first set piece major clash between the superpowers of Egypt and the Hittites—he had every right to carve his victory into monuments across his empire. The truth is though that he blundered at some crucial junctures on a battlefield just northeast of Israel’s current northern border and was fortunate to come away from the encounter with a draw.

Throughout history in every era, among all peoples, propaganda was an essential part of every culture that ever existed. With the invention of the printing press and the explosion of written material from the 15th century forward, propaganda proliferated like never before.  The art of fabrication and lies was taken out of the hands of the few scribes whose job that had been since the dawn of civilization and instead libel, defamation, and denigration was converted into a product churned out in an industrialized fashion, resulting in massive change and terrible harm.

The smears that fueled religious wars, the libels damning both Catholics and Protestants, the calumnies against Jews (a la the “Protocols of Zion,” for example), the “Black Legend” making out the Spanish as monsters—all that and much more was fueled by mass character assassination manufactured factory-style that would have astounded previous generations of prevaricators.

Nothing however accomplished by Renaissance propagandists can be considered as having occurred even on the same planet now with the digital revolution having propelled propaganda into the stratosphere and beyond. There is a new, bone-chilling and terrifying era at hand insofar as the business of misinformation, half-truths and party lines are concerned, and much like the pogroms, genocides and devastation unleashed by the printing press, this global speed of light information explosion, unless checked somehow, could certainly outdo the past in horror.

The new totalitarians availing themselves of this powerful weapon—in one of the great volte-faces of history—aren’t rightists like Pinochet, Mussolini, Franco, et al. The bizarre about-face has self-styled and supposed “progressive” voices promoting censorship, bans, Orwellian “fact-checking,” and almost total media control, and partaking of the shouting down of divergent opinion with a vengeance not seen since the last world war at least.

Netflix, for example, masquerading as a curator of film entertainment, is currently running an abhorrent cinematic offering, “The Present.” This selection is one in which Israelis are portrayed not just as utterly despicable people, but in such an absurdly caricature light as to rival the most ham-handed collective insults excreted in the worst chronicles, rivaling potato-eating Irish or penny-pinching Scots. Netflix has no problem with it though, and they’re not alone; this shockingly obvious and deeply insulting propaganda has won a mind-boggling eighty-one awards from film festivals all over the world, along with critical acclaim from Hollywood to Cannes. Prior to this, Netflix was promoting barely dressed up child pornography—“Cuties”—until the worldwide public outrage, and Turkey disgustedly removing the film from its streaming portal, forced them to grudgingly back down.

The stranglehold goes far beyond movie-viewing though; perhaps the most dangerous grip of the propagandists concerns their vice-like grip on our ability to access basic information. Google is in no way a simple, unbiased, even-handed search engine and at this point it’s fairly obvious that little effort is being employed in even a perfunctory attempt to disguise that fact. If one accesses Google Images and types “bad president” into the search field, of the first hundred images displayed 60 depict Donald Trump, 15 are of other Republican presidents, while there are only 10 photos of Barrack Obama, 10 of Joe Biden and 5 of other Democrat presidents. Typing in “terrible congressman” is much the same slanted story: two thirds are Republicans, one third Democrats.

While Google may have no love for wide swaths of the USA, their loathing of Israel is even more intense. Asking Google to weigh in on “who are the worst people in Israel?” won’t elicit any malefactor’s photo. Not one image of a single murderer, rapist, child abuser or any other criminal will appear on one’s screen. The astonishing results are as follows: photos of Benjamin Netanyahu, Golda Meir, slews of snapshots of Israeli troops bullying, bombing and otherwise wreaking havoc on oppressed Palestinian victims, and for some inexplicable reason, smiling Jewish citizens happily and peacefully parading while waving the Star of David. That’s no search engine; that’s a purveyor of propagandistic venom, and an eminently dangerous one at that.

If these inimical forces—in the media, government, education, etc.—aren’t actively confronted by the kind of decent people who never believed that Jews poisoned wells, that Sikhs reveled in skewering babies, that Mexicans preferred their siestas to their work, they’ll have to be dealt with in any event.

They’re not going anywhere, and they and their falsehoods are coming for all of us.