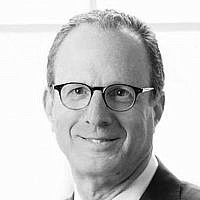 The Blogs
Judah Lifschitz
A Washington DC Trial Lawyer
Apply for a Blog
Advertisement
Please note that the posts on The Blogs are contributed by third parties. The opinions, facts and any media content in them are presented solely by the authors, and neither The Times of Israel nor its partners assume any responsibility for them. Please contact us in case of abuse. In case of abuse,
Report this post.

It is customary on Yom Kippur for one to wear a “kittel” – an all-white robe. Various reasons are given for this custom. The most prominent explanation is that on Yom Kippur we refrain from the most basic physical needs of a human being, e.g., eating and drinking, in an effort to emulate the angels. We wear white to reflect a sense of purity. An alternative explanation focuses on the kittel as a burial shroud which we wear to instill in us a sense of humility as we petition the Almighty for forgiveness.

As the chazzen in my synagogue I wear a kittel on both Rosh Hashanah and Yom Kippur. My primary kittel was a gift from my wife and I wear that kittel until the final Yom Kippur prayer service – Neila. For the last several years, at that point, I change out of my first kittel and don a “second” kittel. The story behind my “second” Neila kittel goes back to my childhood.

My father a”h, who passed away thirty- six years ago, was a highly active Jewish community leader in both the Orthodox world and the Zionist movement. He was active in and held many important leadership positions in organizations such as the National Council of Young Israel, Mizrachi Hapoel Hamizrachi, the Jewish National Fund and the American Zioinist Federation to name just a few. Perhaps his crowning achievement was his lay leadership of the Queens Jewish Center in Forest Hills, New York which began in a storefront and matured into a major influential synagogue in New York City.

Ever since I can remember my father was given the honor of opening the ark for the Neila service, year in and year out. As I write these words I can see him standing perfectly erect during the entire hour plus service at the side of the tall marble framed aron kodesh in the main sanctuary of the synagogue he built. For a number of years he did not have a kittel and would stand at the ark, as if at attention, in his suit and talis.  After a number of years my mother a”h  had a kittel made to order for him and from that Yom Kippur forward he wore that kittel on Yom Kippur and of course during Neila.

My father passed away 36 years ago. My mother outlived him by some thirty years and passed away in 2014. After my mother left us, my brother and I and our spouses had the task of cleaning out my mother’s home. Lo and behold in her closet we found my father’s kittel; the kittel my mother had made for him; the kittel he wore as he opened the ark for Neila. I had not seen that beautiful white kittel for thirty years! My brother insisted that I take the kittel and I decided then and there that I would wear my father’s kittel when I served as chazzen for the Neila service. In this way he would be standing erect next to me helping me deliver our prayers to the Almighty at the most solemn moment of the most solemn day in the Jewish calendar.

This is the story of my “second” kittel.

Today is my father’s thrity-sixth yahrzeit.  May his memory be for a blessing and may his neshama (soul) be elevated in the heavens above.

About the Author
By profession I am a Washington DC trial attorney. I have written several books including a biography of the Klausenbereger Rebbe. I am also the author of several blogs including Saying Kaddish and a Corona Virus blog.
Comments