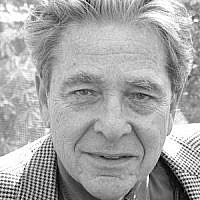 The Blogs
Stephen Rosen
Apply for a Blog
Advertisement
Please note that the posts on The Blogs are contributed by third parties. The opinions, facts and any media content in them are presented solely by the authors, and neither The Times of Israel nor its partners assume any responsibility for them. Please contact us in case of abuse. In case of abuse,
Report this post.

“The problem with religion,” said Zero Mostel, “is that it’s devoid of comedy.”

During a major personal milestone (my second bar mitzvah at age 83) I re-encountered religion.

When I was 13, I agreed with Zero. Religion was without humor. Worse still, I was embarrassed by the requirement that my parents imposed on me: Hebrew school, my first bar mitzvah, synagogue attendance — although I complied. Being Jewish back then was not only too serious, it was too uncomfortable, and even too painful. Casual anti-Semitism existed then, and I was challenged to after-school fistfights in the schoolyard of P.S. 163. Without knowing how to fight and completely unprepared, I somehow held my own, and even bloodied the fat kid who had bragged to his fellow anti-Semites that he would beat me up.

I am prepared to be serious, this time without embarrassment or pain, but with an open mind and an open heart. “History does not repeat itself,” Mark Twain said, “but it does rhyme.” No repeat of fisticuffs this time, but some biblical injunctions do rhyme.

Among some of us who live past the biblical age of three score and 10, there is a quaint Jewish belief that we have entered a “second childhood,” and so we may decide to honor the 70th anniversary of their first bar mitzvah (“son of commandment”) by celebrating a second bar mitzvah. My wife encouraged me to do this as I turned 83. And I like being the center of attention.

As part of this religious service, the candidate reads the week’s portion of the Torah and is required to interpret it for modern listeners. My portion, 70 years ago as now, comes from Leviticus 19 and happens to be: “You shall love your neighbor or fellow as yourself.” (But “you shall not beat up your classmate” might have been welcome long ago.)

This portion may be the most difficult biblical injunction to follow because we’ve all heard it before, but the trouble with what “everyone knows” is that we don’t know it with enough enthusiasm and conviction to act upon it fully. “People need to be reminded more often than they need to be instructed.” Was Samuel Johnson talking about me? Isn’t it all right for an octogenarian to be serious about serious stuff? Maybe Zero was joking?

Now that I’m 83, I’m amazed at how much Judaism, around for millenniums, has changed in just 70 short years. Of course it’s me who has changed, and change itself has changed. Back then, my Judaism was limited to wanting to be George Gershwin and Albert Einstein. Right now, I just want to be . . . and to be my best Jewish self.

About a third of people surveyed say they attend houses of worship regularly, and about a third say they seldom or never do. As the Jewish joke goes: “People go to synagogue for different reasons. Schwartz goes to talk to God, and Cohen goes to talk to Schwartz.” I doubt Zero ever attended, but if he did, he would have made us all laugh.

Although “Love your neighbor” may be the hardest commandment to implement, Maimonides interprets this, and Judaism recognizes, that love and emotions cannot be “commanded.” Judaism does not compel faith, it compels action. Judaism is a science of practical ethical behavior and asks only that we perform acts of love and loving-kindness in the hope that these acts lead to love itself.

The healing power of helping others also heals oneself. Self-love doesn’t come from ignoring your faults, but by focusing on your own virtues, and your neighbor’s, by asking, “Do I come across as loving?”

We have a wonderful next-door neighbor. I wash his car and keep an eye on his property. He allows us to borrow some of his 10,000 books (any of which he can discuss). And sometimes I also borrow his ice cream. He visits me when I’m sick. Not orchestrating, but seizing opportunities as they present themselves; deed-intensive kindnesses that happen to be reciprocated.

I re-encountered Judaism and Jewish traditions, without embarrassment, when my parents died in my 40s — a wake-up call — and I said kaddish, the prayer for the dead. I relearned what I had forgotten 70 years ago.

A life-changing event occurred in 1990 when a Jewish émigré refusenik, a distinguished Russian scientist, then driving a taxi, asked me to help him find a job in his physics specialty. A la “love thy fellow,” I made very practical suggestions based on my own experience, which he followed. He found the right job and told his Brighton Beach neighbors (as in “love thy neighbor”), who then flocked to me for advice.

I formed a nonprofit foundation, developed a syllabus, and co-wrote a book with my wife, Celia, for both Russian and American Ph.D.s, which reached thousands of other scientists who needed career management help. “Love thy fellow” and being a good Jew — a good person — was the subtext, embedded in my finest hour, my true calling.

In my opinion, a good Jew questions dogma, the existence of God, and even a God who makes mistakes.

We physicists question everything, such as “the unreasonable effectiveness of mathematics in describing our physical universe.” Similarly, I believe religion, and Judaism, can be unreasonably effective as guides to our ethical and moral universe.

“Love thy neighbor” inspires me to do good deeds, when opportune: visit you when sick, give you a eulogy, lend you books, with no expectation of reciprocity. And, I believe, properly understood, it’s a moral oasis in space and time, an ideal of behavior we can all aspire to visit.

Stephen Rosen, an astrophysicist, had a second Bar Mitzvah  at Congregation Rodeph Sholom in New York, and Temple Adas Israel in Sag Harbor. He welcomes your comments: stephenrosen@gmail.com.

About the Author
Stephen Rosen is Chairman of the Science & Technology Advisory Board at Celia Paul Associates. He specializes in working with physicians, attorneys, and scientists. He is the founder and Director of Scientific Career Transitions, a tax-exempt organization (funded in part by the Alfred P. Sloan Foundation) that pioneers in the development of systematic methods and specialized materials to help credentialed individuals advance their careers.
Related Topics
Related Posts
Comments