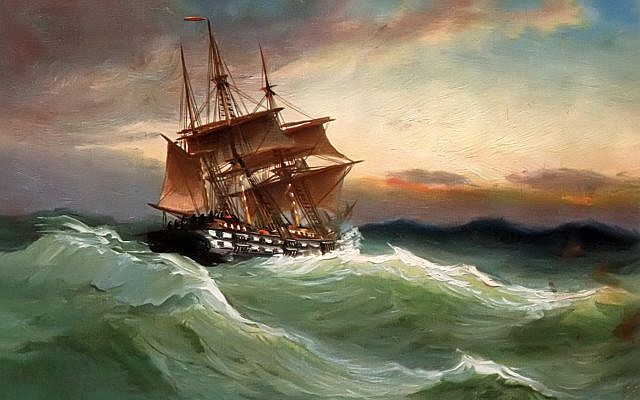 Ballast.
1 : a heavy substance (such as rocks or water) placed in such a way as to improve stability and control (as of the draft of a ship or the buoyancy of a balloon or submarine)
2 : something that gives stability (as in character or conduct)…
*(from Merriam-Webster dictionary)

If Yair Lapid and Benny Gantz some how manage to merge their parties,  the Israeli electorate will have a viable opportunity to promote healthy change and new hope for decent government.  In essence, we will then have a “ship” to guide us through the next years’ stormy waters. Security-minded souls should be MORE than happy with an honest broker at the helm of this new ship.  However, with all its pluses, as in all nautical journeys, a ballast is needed to insure safe passage. That ballast should come not from the “right”, whose voice is already echoed in Gantz’ new party, but from the left of center. A merger of the now diminished Labor party and Meretz would be a useful step, but this may be impossible. Hence, one should take a good long look at both Labor and Meretz.

Meretz has always been clear in their platform and vision.  Over the years they have consistently promoted a social agenda which has no color or creed. Their’s has been a humanistic vision to the core. To support Meretz has always been a vote for equality, opportunity and our insurance that the poor and needy, the elderly and the discarded will be cared for.  Meretz’ voice in a new government is absolutely essential to balance and steady the ship. That voice is the ballast that will keep us informed and will keep the fires of positive social action alive.  Israel was founded with strong principles of social justice and equality; yes, in the last decades our economy has become strong.  But at what price? Can we ignore the fact that the top-crusted 2% of our population controls and benefits from the new “economy” and that the gap between rich and poor has drastically widened?

If Benny Gantz and Yair Lapid merge, they should also make it clear, in some way or another, that there is respect for the Labor-Meretz block.  This can be achieved only by mirroring some of Meretz’ key social agenda positions, along with the clear message that  “security” also emanates from social equality.  The professed “stink” of the left, as if is a crime to care about others less fortunate than we are, must be neutralized. A clear social agenda by those who rule, an agenda that is also shared with parties further to the “left”, will create true unity in our country. The “stigma” of humanism must be erased from our minds. Until we repair our own “house” (or “ship” as you will),  we stand in danger of  “sinking”; the process unfortunately started throughout the last decade.

Even if there are not formal alliances, when and if a solid merging of the centrist parties is achieved, further unity (albeit outside the main decks of the ship) must be embraced. If the common cause of social decency and 0% tolerance of poverty is promoted, we will have given new hope to many diverse sectors of our population. This newfound hope will keep our spirits alive in the next decade, promoting a caring, compassionate society; this will, no doubt, be challenging. The extent to which Benny Gantz and Yair Lapid can navigate the future together, with full tacit support from those with a clear and prominent vision will ultimately insure not only their victory, but inspiration for years to come.