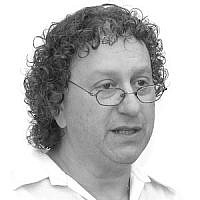 The Blogs
Dani Katz
Apply for a Blog
Advertisement
Please note that the posts on The Blogs are contributed by third parties. The opinions, facts and any media content in them are presented solely by the authors, and neither The Times of Israel nor its partners assume any responsibility for them. Please contact us in case of abuse. In case of abuse,
Report this post.

Do not underestimate the power of social media. Many of my friends will know of my connection to the Shoah through my being the son of a survivor. Most, however, will not know that in the early 80’s my father Z”L (who passed away in early 2006) wrote a series of memories in a number of exercise books, a sort of diary of what happened to him and his family before and during the war and what had happened to him after the war.

In the early 90’s when I was given the books I started to write up what he had written but trying to decipher my father’s handwriting and sometimes understand his English which was interspersed with Yiddish, German and Polish was not easy.

I wrote up a section and asked my father if he would go through this with me, correct any errors and fill in the gaps I had left due to my not understanding a certain word or expression. Sadly he wouldn’t do this just as over the years he wouldn’t talk about what had happened. So I put the project aside and did little with what he had written.

A number of times I looked at the books that contained my father’s history but just pushed them back into the drawer. However, earlier this year, something started nagging at me to do something. Maybe it was the fact that January 27, 2015 marked the 70th anniversary of the liberation of Auschwitz and April 15 would mark the 70th anniversary of my father’s liberation from Bergen-Belsen that spurred me on to do something with what he had written.

I knew time was running out and it was important his history be preserved in a form that his grandchildren and later generations of my family could read a first-hand experience of what had happened to a part of their family during the Shoah.

Whilst my father hardly ever spoke about the war years he did a number of times refer to April 15, 1945 as being his ‘rebirth’ date and took this date on as his birthday. Not even my mother knows what his real birthdate was and so over the years we, as a family, always celebrated April 15 as my father’s birthday.

And the significance of this year, Yom HaShoah – Holocaust Remembrance Day (which each year is observed on the Jewish date of the 27th day of the month Nisan) falling on April 15 was not lost on me and also weighed in on my decision to do something now about documenting my father’s history.

With this is in mind I took the exercise books out of the drawer and started reading through them again.

My first task I decided was to create a sort of timeline of events, a framework, based on what he had written and to try and verify dates, places and events and then, around this, fill in my father’s observations, comments and experiences during the war. I felt it was important to create a chronology of events that took him from a small village in Poland called Osmolin in September, 1939 to a number of labour/concentration camps and Auschwitz and then on to Bergen-Belsen where he was liberated by the British on April 15, 1945.

And this brings me to social media and more specifically Facebook.

Over the years I received photos and some information from family in England and Israel and from Yad Vashem, however, since joining and becoming involved in a number of “Children of Holocaust Survivors” groups on Facebook I have been able to begin to document and even verify some of what my father wrote in his ‘diary’.

On January 27, 2015, the 70th anniversary of the liberation of Auschwitz, I posted a photo and the following comment on my Facebook timeline:

In researching the Shoah and specifically tattoo numbers I came across this one – 140603. My father’s number was 140876. Could my father have been standing in the same line as the person issued with number 140603? I mean it is quite feasible they came into Auschwitz in the same group, might even have shared the same barracks and even bunks. So is it fanciful to think that they did not know each other?”

I also posted the above in a number of Facebook Holocaust/Shoah groups I am a member of and from this I connected with people I had never met before.

A few days later, someone was kind enough to message me a copy of a page from a book called “Auschwitz Chronicle” that provided information about those who received numbers in this sequence including the date they arrived in Auschwitz, from where the transport came and how many people were in that particular transport.

This was information I never thought I would ever discover all these years after the war.

A day later, from someone else I had met in another group, I received information on the deaths of a number of people who had received numbers close to my father’s number. The message read:

And within a few hours of receiving the above the following message via Facebook arrived from yet another person I had met in a group, Toba Abramczyk:

“Hi Dani just reading your post on FB your dads number is not to far off my dads. 140729 – i wonder if they came on the same transport. omg just got chills up and down my back…my dad was in fustengruber….worked the coal mines…i am 100% postitive they knew each other. your father’s name is very familiar to me”.

Reading this also sent chills up and down my back and caused me to break out in a cold sweat, I could not believe what I was reading or what I had found out in such a limited time via Facebook.

On checking the page sent to me over the weekend I was able to work out that Toba’s father, Meyer Abramczyk, arrived in Auschwitz on the same transport as my father and would have been tattooed with him in the same group – I let Toba know what I had found out.

In subsequent communication with Toba we were able to piece together that our fathers were not only in the same Auschwitz subcamp called Furstengrube at on or about the same time but that prior to arriving in Auschwitz they were both in a labour camp called “Gutenbrunn” near Poznan (Posen) in Poland.

All this I found out within the space of a few days after I started sharing some of my father’s details in a couple of groups on Facebook on Holocaust Memorial Day, January 27, 2015.

From Toba I learnt about a book called “The Dentist of Auschwitz” written by Benjamin Jacobs (Berek Jakubowicz) who was in Gutenbrunn at the same time as our fathers. My father had written about Gutenbrunn in his writings, however, in previous searches on the internet I could not find a lot of information about this place. In the chapter on Gutenbrunn I was able to learn more about this camp.

In Chapter 12 titled “Auschwitz”, Ben Jacobs lists the numbers he and his father and brother received – Ben (141129), his father (141130), brother Josek (141131) – and from this, again using the page sent to me earlier, I was able to ascertain that the three of them also arrived in Auschwitz on the same transport as my father and Toba’s father.

Finding the above mentioned book on the internet allowed me to learn more about Gutenbrunn and the conditions the prisoners (including my father) lived under but something else of greater significance then occurred.

Doing another internet search on the labour camp called Gutenbrunn again yielded little information except for the reference to the above mentioned book. However, when I typed this name into the USHMM (United States Holocaust Memorial Museum) the results came up with five links and one of those was a link to an oral history my father had done exactly 30 years earlier, in March 1985, a copy of which was never given to my parents.

In addition to the ‘diary’ my father had written a few years earlier, I now had more documentation to work on in piecing together my father’s experiences between 1939 and 1945.

On top of this, while doing another new search on the camp known as Gutenbrunn, I came across a reference to a book written by Abraham Landau (141282) called “Branded On My Arm and In My Soul” and I was able to work out from his number that he also was on the same transport to Auschwitz with my father.

In Landau’s book I found a reference to Gutenbrunn being known also as Kobylepole during the German occupation between 1940-1942.

In a short space of time (less than a week) I was able to identify through the assistance of social media, Facebook and the internet, the names of five other individuals who came in to Auschwitz on the same date as my father.

But there is more.

A week or so later I posted a “note” on my Facebook Timeline in relation to two documents I had received in 2013 from the ITS-Arolsen archive via Yad Vashem following an email I had sent to Yad Vashem searching for information about my father. In that note I mentioned I was seeking clarification as to the background of these documents. I also posted the same comment on a couple of Shoah groups on Facebook.

Within 24 hours I received a message from someone in one of these groups who works at ITS-Arolsen offering to help. I sent him additional details about my father including the name he took on after liberation and within a few days he sent me 28 documents that related to my father after his liberation – all were based on his new, adopted name. These dealt with his being in various labour, concentration and deportation camps, sanatoriums and leaving Europe to come to Australia.

My previous efforts to locate documents about my father resulted in two pieces of information from Yad Vashem but my requests then for information had been sent based on my father’s given names, as he would have been known in pre-war Poland and in the camps during the war. I had not thought about requesting information based on the name my father adopted after he was liberated (which is a whole other story for another time).

So again a ‘new’ friend I made on Facebook came to my aid in helping me document my father’s movements after being liberated from Bergen-Belsen.

Over a six week period, between the end of January and the beginning of March, using as source material ‘diaries’ my father wrote 30+ years ago, an oral testimony recorded 30 years ago and the assistance of friends I had made on Facebook I was able to piece to together a timeline for my father from when the Germans invaded his village of Osmolin in Poland in September, 1939 where he and his family were living when war broke out up to his arrival in Australia on Melbourne Cup day, 1950.

Time is running out to document the history of my parent’s generation but with the help of social media it can still be done as I have found out.

About the Author
Past Chairman of the World Union of Jewish Students and former student activist in Australia. Currently working on writing his late father's timeline and experiences during and after the Shoah.
Related Topics
Related Posts
Comments