The Blogs
Judith Brown
Young enough not to quit and old enough to know better.
Apply for a Blog
Advertisement
Please note that the posts on The Blogs are contributed by third parties. The opinions, facts and any media content in them are presented solely by the authors, and neither The Times of Israel nor its partners assume any responsibility for them. Please contact us in case of abuse. In case of abuse,
Report this post. 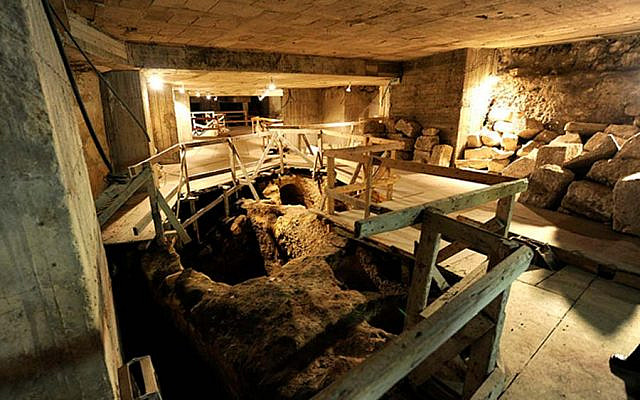 I haven’t written for a while because whatever thoughts or opinions I might have others have already penned succinctly. Rehashing and reanalyzing war, the economy, and politics has become as futile as chewing on water. Commenting on Ukraine is as redundant as watching grass die. We often write to vent or articulate an opinion with a sense of urgency that we feel must be heard. But in reality, we are trying to make sense of the senseless or attempting to understand and give insanity reason or relevancy.  I have been wondering in frustration why my mind seems to be reluctant in putting words on paper. Then came a three-way conversation with my BFF in Haifa when I was introduced to Miriam Siebenberg. Now in her 80’s, Miriam Siebenberg is still as articulate and charming as ever.

Here is a story that has nothing to do with Ukraine, Putin, the price of gas, Covid, or politics. It’s a story of courage, love, history, heritage, and Judaism. A story that began in 1970 and remains an archeological wonder within and outside Israel. A story of two people who wanted to take the world on a journey back in time. A story of an unselfish desire to share with the world Jewish history and Jewish rights to Jerusalem and Israel.

I had never heard of Theo and Miriam Siebenberg, let alone Siebenberg House, until one lazy Sunday afternoon a telephone call from Haifa compelled me to write a story.  I listened with quiet awe at a narrative that sent me on a mission to do serious research on The Siebenberg House in Jerusalem.  Anyone taking a stroll on Beit Hashoeva Alley, in the vicinity of Temple Mount will come across number five, The Siebenberg House. A house suspended in time, literally and archeologically.

Theo Siebenberg was born in 1925, in Antwerp, Brussels. In 1940, when Nazi boots marched across Belgium, the family escaped in their Studebaker and in what could have been described as a scene from The Sound of Music, made the arduous journey towards freedom crossing the Pyrenees into Spain and Portugal.  In Portugal they boarded a boat to the US. They landed on Ellis Island in NY where they started a new life, and where as a teenager, Theo helped raise money for Israel. After the war he eventually returned to Antwerp joining the Lehi Movement. In November 1947, Theo went to Lake Success as a journalist where the UN General Assembly was voting on the “partition plan” for Israel. This background of zealous Zionism and love of Israel, especially Jerusalem, laid the foundation for Theo and Miriam Siebenberg’s legacy.

After the 6-day War, real estate in Jerusalem was ready for a face lift. Years under Jordanian rule the old Jewish quarter became a shadow of its former self. Left to years of decay, property was allowed to crumble, waiting to be restored by anyone willing to restore. Theo and Miriam fit the description. Inspired by Theo’s enthusiasm to delve deep into the history of Israel and Jerusalem, the couple found the perfect house to fulfill all of Theo’s inspirational legacy and open a door to a world that no one thought existed. This is the rest of the story.

In 1970 the Siebenberg couple found the perfect house in a corner of Jerusalem’s old Jewish quarter, rife with history, faith, and Judeo archeological wonders, the choice was inevitable. The house on Beit Hashoeva unobtrusively located in the vicinity of the Western Wall hid a treasure that took 18 years to reveal and marvel at. Besides being an idealist, Theo Siebenberg was also pragmatic, logical, and focused. With archeological excavations in Jerusalem being so prolific, Theo surmised that being so close to active digs and the historic Western Wall, the chances of his house harboring similar historic lineage to Jewish life were not only possible but probable. Present day Jerusalem is still an active archaeological “dig” which connects laterally 2,000 years of Jewish life in the city and beyond its gates.  Theo Siebenberg didn’t hesitate to follow his conviction that his house sat on unearthed history and it needed to be revealed.

The decision to start digging beneath the house was not without challenges and expense.  The four-story corner house did not give much room for a major project Theo Siebenberg was proposing. Space was limited, and his vision was not exactly received with enthusiasm by mainstream archeologists in the area who allegedly had already “looked into” the location on Beit Hashoeva and “found” nothing. But Theo’s belief, logic, and strong gut feeling defied all skeptics and started to dig.

The project was not for the faint hearted.  The house located on a slope of a hill added to the problem of keeping the foundation safe while digging was in progress. The safety integrity of the house and neighborhood homes never escaped the intentions of the Siebenbergs.  Swiss engineers were engaged and contracted to advice and draw up plans for “anchoring” the house to keep it stable during the excavations. A multi-section retaining wall was held down by anchors to hold up the approximate 60 tons of pressure that the excavation was going to be putting on the foundation. It took a total of 18 years in preparation and excavation for the project to be completed.

The location of the house in a small alley made it impossible for large excavation hardware to be brought close to the house. The only option was for the dirt to be removed by hand in buckets and carried on foot to awaiting donkeys which transported it to trucks in the distance. The volume of dirt excavated was five times the volume of the area.  Sifting through the dirt for artifacts was also done by hand. Amid skepticism and strange knowing glances from neighbors, the hard work continued with unwavering determination. Pottery chards, glass, and jewelry started to miraculously appear among the dirt. The first artifact that was found was a lady’s “key ring”. Possibly dating back to the Second Temple period, the beautiful bronze ring is believed to have opened a lady’s jewelry box. More dirt and more artifacts slowly began to uncover Jewish life in Jerusalem through the millennia. Strata after strata of Jewish history once buried under centuries of dirt was suddenly being resurrected, restored, studied, and understood.

Historians and Jewish scholars have marveled at what Theo and Miriam Siebenberg discovered and most importantly contributed to historical Jewish significance in Jerusalem. Milton Belagore, a Hasmonian scholar, historian, and archeologists has spent his life trying to discover artifacts that shed light on the Hasmonian era. He described Siebenberg House as “his Shangri-La epicenter of antiquity connecting the Maccabees to the modern world”.

The journey into the past goes back almost 3,000 years. Walking through the “basement” one can trace life, turmoil, and war back to the first temple period. Remnants of stone columns held up the second temple, and a Maccabean lower aqueduct carried water from Solomon’s pools to the temple for cleansing and purification. Up until King Hezekiah, the Western Hill had tombs carved in the rock. But with the pending siege of Jerusalem by the Assyrian army, this hill became part of Hezekiah’s fortifications to protect the city.  The Siebenberg house made this connection through its findings of structures of Hezekiah’s fortifications.

Mikvehs from Jesus’s times were discovered close to a canal dating back to the Hasmonian era. Standing on the ruins of a Hasmonian Palace, the canal was part of the water aqueduct system that Hasmonians built to carry water from the outside to the inner city. On a 2015 trip to Siebenberg House, former Israel Tourism Consul for the Midwest (2008-2015), and historian student at the University of Jerusalem, Omer Eshel, was taken aback by the throve of historical significance he was walking through. Every step took him back into Jerusalem’s history and Jewish claim on the city and the land. Per his quasi quote: just when he thought he had seen everything, Miriam Siebenberg took him up a level and pointed at a charred pillar of dirt: layers of ash from the Roman destruction of Jerusalem in 70 CE. Omer notices structures carved in the rocks which Miriam explained were granaries from Solomon’s Temple Period, the First Temple.

The Siebenberg house revealed the old and the modern. Among the arrowheads, Roman crucifixion nails, ink wells, burial chambers, and jewelry dating back thousands of years, they found a 1948 Czechoslovakian made machine gun from the War of Independence.   A lateral historical connection spanning thousands of years of a city that has been lived in, occupied, and fought over for as long as it has existed. The Siebenberg house traced  history from the first Temple Period to the Crusades and Israel’s statehood.

At the end of Omer Eshel’s visit in 2015, Miriam succinctly brought home the relevance of The Siebenberg House: “This house represents the entire history of the Jewish people, from Biblical times, through the destruction of the Second Temple, the diaspora and Holocaust, the return to Zion and the founding of the State of Israel.” A statement so many have been trying to dispute or deny for decades. No other narrative can come closer to the truth. Tons of unearthed dirt revealed a truth most feel compelled to ignore or conveniently change. Undisputed as it might seem, organizations like the UN, BDS, and liberal universities in the US hold on to distorted narrative against Israel and Jewish rights on a land and city fraught with archeological truth within its foundations.

What Theo and Miriam managed to build was more than a mundane museum. Like an onion, they peeled away millennia of Jewish life in Jerusalem and inadvertently in Israel. The downward trip into the past found a story of a people whose ancestry is not a myth. It is archeologically substantiated by tons of dirt and debris that opened up a lost world of Jewish rituals, life, faith, war, love, and even destruction. Omer Eshel’s last thoughts on that 2015 visit: “…I smile and think back to my ancestors, who stood right here, where I now sit, who saw before them the mighty armies of Assyria, of Babylon, of Rome and wondered what would become of the Jewish people.”  The Jewish people are back home. Theo and Miriam made sure that the world knew it.

“For Zion’s sake will I not hold my peace, and for Jerusalem’s sake I will not rest, until the righteousness thereof go forth as brightness, and the salvation thereof as a lamp that burneth…. Thou shalt no more be termed Forsaken; neither shall thy land any more be termed Desolate:” (Isiah 62)

About the Author
Judith was born in Malta but is also a naturalized American. Former military wife (23 years), married, and currently retired from the financial world as Bank Manager. Spent the last 48 years associated or working for the US forces overseas. Judith has a blog on www.judith60dotcom Judith speaks several languages and is currently learning Hebrew.
Related Topics
Related Posts
Comments