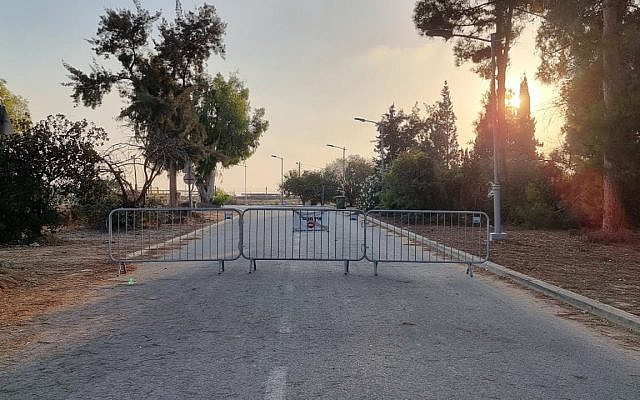 Silence is usually golden, unless it is the deafening silence that brings with it the real and present threat of another violent explosion of a military operation.

On Tuesday, 62-year-old Bassam al-Saadi, a leader of the terror group, Islamic Jihad, in the volatile city of Jenin, in the northern part of Judea and Samaria  (aka West Bank), was arrested, together with other Islamic Jihad operatives there, and ever since, the lives of the people who live and work in the region of the Western Negev, bordering on the Gaza Strip, have been disrupted. The Islamic Jihad are a relatively small yet ambitious terror group who associate with and are backed by Iran and are used as Iran’s tentacles, with closer access to Israel. In light of the arrest of al-Saadi, intelligence warns that the IJ plans to carry out an attack on Israelis on our side of the border using sniper fire or anti-tank missiles. Tragedy has hit civilians caught  in the crosshairs in the past, such as during the escalation in 2019 when a Kornet missile was shot from Gaza at a car driving on the road leading to Kibbutz Erez, killing Moshe Feder z”l, its passenger.

In order to prevent such loss of life in our region, hugging the Gaza Strip, many roads and fields have been rendered inaccessible these past four days — and for at least two days to come. Any road visible from Gaza has been cordoned off. Likewise, sections of communities with a line of vision towards Gaza, have also been closed. Such is the case with a section of the perimeter road in my community, Kibbutz Nirim. Our farmers cannot access the  crops in our fields: our peanuts, bananas, sweet potatoes and other crops which will hopefully survive the ordeal. Also as a result, driving in our area has become a nightmare. A journey that usually takes 10 minutes, took 2 ½ hours. Last night, people from two of the communities in my region were unable to get back  home for hours at a time, stuck just outside their community by army road blocks. The three communities literally on the border have it even harder. Life is going on as best as possible. Outdoor  activities have been either moved inside or postponed. There have even been disruptions of services. Blood samples from infirmaries have had to be driven out to the nearest junction, rather than being picked up by a specialized vehicle. Newspapers can’t get in. Delivery trucks with food and fresh produce are  unable to enter and as kibbutz shelves are emptying, we are feeling the noose tighten. Many have begun to measure the decision regarding if and when it’s time to leave, especially those families with littles, such as mine.

This is being called the “silent” escalation, and while it’s far better than when rockets were exploding inside our communities and we were running back and forth to our safe rooms with less than 10 seconds to get there, in some senses this is more challenging for many people. We’re used to dealing with rockets and mortars. What is going on now is something we have never experienced. And, all the while, we know that there could be rocketfire any minute.

Personally, I put my faith and trust in the IDF. I believe that they know what they are doing. I respect the fact that they are dealing with a very complex, dangerous situation in a manner that protects civilians living here. I trust that all this is directed  towards heading off an all out war,  requiring  our evacuation, and greater stress, trauma and possible loss of lives — of civilians and soldiers.

But people are losing patience.

The Hamas are not interested in an escalation now, so they say. So far, they have been trying to prevent the IJ from executing their plan. However we are now looking at another couple of days of this lockdown, as we approach a weekend which also carries potential for igniting the fuse. Tomorrow — Saturday night — the fast of Tisha B’Av begins. Tisha B’Av is the commemoration of the destruction of the First and Second Temples, and on this occasion, many religious Jews go to the Western Wall and are allowed on the Temple Mount, as well. And THIS is a place where we have experienced the eruption of violence very recently. If Jerusalem becomes violent this weekend, the rumblings we have been  hearing and feeling down here could cause a linkage of command, bringing the Hamas onto center stage — releasing the reins on the Islamic Jihad, and creating a joint threat.


It is completely untenable to be in a situation where the State of Israel and the citizens of this sovereign land are held captive by a violent, minor terror group. An entire section of the population of the State of Israel, under “house arrest” without even one shot having been fired from Gaza. Not even an incendiary balloon.

On the other hand, an all-out military action would clearly endanger the lives of civilians on our side, as well as innocents on the other side. As usual, Israel plays the part of  the only “responsible adult” in this situation, since neither Hamas nor Islamic Jihad give a damn about the lives of civilians on either side. For them, all civilians are pawns to be used as a means to their end.

I’m not going anywhere — yet. For now, I have brought down my suitcase from my little attic, climbing  the rusty metal ladder on the wall that absorbed so much mortar shrapnel back in 2014. This is precautionary, since having to do so while the Red Alert early warning alarm is already blaring, and mortars are already exploding outside, is not an activity I relish doing ever again. I know that our regional council and our kibbutz have contingency plans for action, should we once more find ourselves dragged into that junction. Till then, I continue to go about my daily tasks, with one ear on the media, while trying to keep the vibes of the news away from my granddaughters, also on Nirim. I will also continue with my daily swim, and try to concentrate on work that needs to get done.

Whether this silent, volatile escalation is on its way towards calming down or  suddenly veering towards violence,  noisy with the explosion of an all out war, only time will tell.

About the Author
Born in the USA, Adele has lived in a Kibbutz on the border with the Gaza Strip since 1975. She is a mother and a grandmother living and raising her family on the usually paradisaical, sometimes hellishly volatile border. She moderates a FB group named "Life on the Border". https://goo.gl/xcwZT1 Adele recently retired after 38 years as a teacher of English as a Foreign Language, as well as a teacher trainer and counselor for the Israeli MoE for EFL and a Tech Integration Coach. She blogs here about both Life on the Border, as well as about digital pedagogy, in "Digitally yours, @dele". She is a YouTuber, mostly on the topic of digital stuff. (https://goo.gl/iBVMEG) Her personal channel covers other issues close to her heart (medical clowning, Life on the Border, etc.) (https://goo.gl/uLP6D3) In addition, she is a trained medical clown and, although on COVID hiatus, until allowed back into hospitals, she clowns as often as she can in the pediatric ward in the hospital in Ashkelon. As a result of her activity as an advocate for her region, she was included among the Ha'aretz "Ten Jewish Faces who made Waves in 2018" https://goo.gl/UrjCNB. In November 2018 she was invited to Geneva by an independent investigative committee for the UN to bear witness to the border situation, and in December 2019 addressed the UN Security Council at the request of the US ambassador to the UN.
Related Topics
Related Posts