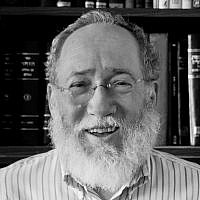 There is a physics to misdeeds according to the rabbis, and this explains the stoning of the Arab mother of nine. Aveirah Goreret Aveirah. Sin causes sin. That means when a grievous action happens we have to play the event backwards – to see what sin caused it, and then what sin caused the aforementioned sin, and then further back. Once you have gone as far back as possible, you are not finished. You must then play it forward from that “original sin” to see what decisions could have been made so that the trail of sin could have been stopped in its tracks – and then to understand what can be done now to not make a horrendous situation worse.

National Zionist young men, students at a West Bank yeshiva, are alleged suspects. Of course we don’t know the full credibility of their culpability yet. But if one considers a pathology of murder, it is not hard to trace it back to the sin of the Jewish unconcern with the lives of innocents. Indeed that sin is born within utter rage at all Arabs and their demonization by the rightwing. It is easy in such circumstances of hatred and rage to inflict collective punishment – considering terrorists and civilians all the same.

And the sin of collective retribution stems from an expansion of the Law of Rodef – the pursuer, who it is understood must be stopped in his murderous pursuit to kill us. Since the civilians are defined by the radical right as all being murderous in intent, if not in action, then the Rodef is no longer an honorific to whip up Jewish frenzy, but it becomes a supposed Halakhic justification for murder, thus Rabin’s assassination.

And this notion of all Arabs being Rodef who we must respond to, even without action or intent, is incited by the lack of condemnation and excused, making young Jewish villains who abduct, kill, and burn a young Arab boy; as well as a Jewish soldier in uniform who shoots an immobile terrorist into actual heroes. And these are only random examples.

This sin was caused by the Price Tag phenomenon of “casual” acts of violent causality. The aim is to punish all Arabs, to destroy Arab property, reminding everyone who the real bosses are here in the Holy Land. And those “relatively harmless activities” are caused by Jewish frustration at the lack of Arab acceptance of our claims of Messianic proportion that this is ultimately our Land and they are only here at our sufferance.

And it is here at the sin of an overweening religious Messianic consciousness that I stop tracing the trail of sin that has gotten us into this mess. A wrongful Messianism (religious or secular) is one that believes that all is permitted to fulfil this new age. All who stand in the way are enemies. And when there are real terrorists out there, then the case is closed against all who are labelled as fellow travelers.

We religious Jews have lost or perhaps never fully developed a humanistic Messianic consciousness that truly includes the other, except as servants or obedient students. Generations of antisemitism didn’t make it a popular or even a conceivable option. Indeed a “price tag” mentality was so inconceivable in such an environment. So much so, that the actual weak – ethically – notion of not harming gentiles in any way based on the practical notion of not igniting Eivah – enmity on their part was sufficient.

But today is different. We have the power although not nearly enough for our religious Messianists. And we have the ideology of not letting anyone stand in our way, excusing, allowing, and even encouraging murderous thoughts and then actual misdeeds.

What we don’t have are rabbis and political leaders to further the common ethical society of Chief Rabbi Rav Kook (serving from 1921-1935), the great notion of Chief Rabbi Rav Uziel’s (1939-1954) individual common goodness, or Chief Rabbi Unterman’s (1964-1973) imperative that the Sabbath must be violated for the non-Jew who is created in God’s image. Such ideas would make the alleged stoning by religious Zionist yeshiva students as inconceivable as them tying a knot on the Sabbath or not checking lettuce for bugs.

More than anything else, the command of the hour is to prevent the next cycle of this Aveirah Gororet Aveirah – Sin Causing Sin. We must not allow the radical Messianists to deny the proper intelligence process to find out who is indeed guilty. If the alleged perpetrators are indeed shown to be guilty, they will be excused by the Messianists and even glorified. We have seen this before with Baruch Goldstein (I still can’t believe I tutored him in Talmud at Yeshiva University). These are the next sins in the waiting, not to mention attacks on the Israeli police and intelligence professionals. And who is there to care for those nine orphaned children of Aisha Rabi?