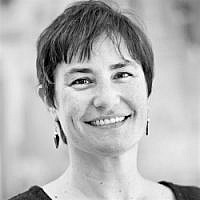 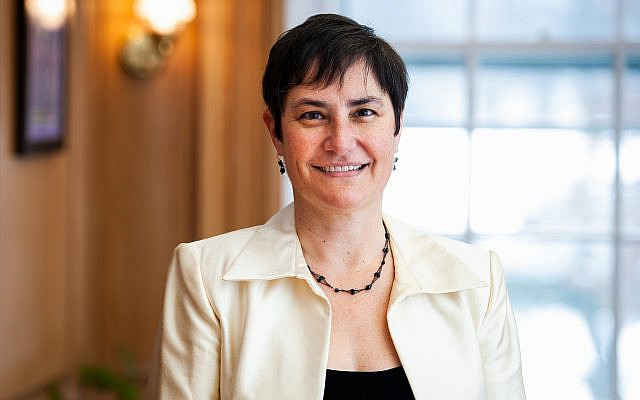 A lifelong knitter, I worked on a sweater as the bus wound through the Hebron Hills to the center of Hebron. The bus was carrying CEOs of organizations of the Jewish Social Justice Roundtable, at the mid-point of an extraordinary eight-day study tour to meet with Israeli and Palestinian changemakers, all of whom are brave and inspiring and powerful counterparts working toward peace and justice.

Of the many strands of my life that were knitted together, some were about to be undone. It was, to the day, the 43rd anniversary of my bat mitzvah on the secular calendar. That morning in 1979, I led every part of the Shabbat morning service and chanted Torah and the haftarah, one of the first girls in the Conservative movement to do so, and a direct (if largely unacknowledged) outgrowth of the influence of Mordecai Kaplan, the founding thinker of Reconstructionist Judaism, the movement I now head as CEO of Reconstructing Judaism. That’s how I came to be on the bus.

This year, the Jewish and secular calendars aligned as they did in my bat mitzvah year, and November 17 was once again Parashat Hayye Sarah—the portion that describes the patriarch Abraham buying a cave in Hebron to bury his wife, Sarah. My family had spent a month in Israel the summer before my bat mitzvah in 1979, and we visited the Cave of Machpelah. At that time, the area around the holy site was still a thriving Palestinian marketplace, and I vividly remember the sharing of a place sacred to both Jews and Muslims.

My needles moved rhythmically, creating orderly rows of delicate knots as we rolled into the center of Hebron that Thursday afternoon. When I got off the bus and looked around, I could hardly recognize the place I’d visited as an adolescent. Now, while Muslims still have access to the tomb, the center of Hebron has been largely cleared of Palestinian businesses and residents and a small, militant group of Jewish settlers live there heavily guarded by a large contingent of Israeli soldiers. Plans have been approved to expand the Jewish footprint in Hebron.

We saw Jews beginning to pour into the city to join the Jewish residents of Hebron and the nearby settlement of Kiryat Arba—home of the physician-turned-terrorist Baruch Goldstein, who murdered 29 Arabs and injured 125 more on Purim 1994/5774, and home of the right-wing Jewish Power party leader and new cabinet minister Itamar Ben-Gvir—to celebrate the religious origins of the Jewish claim to the city.

We wouldn’t find out for another couple of days – and another quarter of a sleeve of my sweater completed — that, according to an estimate by the Israeli police, by Shabbat, the number of visitors had grown to nearly 40,000. Violence against Palestinians began on Friday evening and climaxed on Shabbat afternoon, when crowds of Israelis marched through Hebron’s vegetable market on their way to the tomb of Othniel ben Kenaz, attacking Palestinian shops and residents while Israeli soldiers largely stood by. The Israeli military officially acknowledged that the first stones were thrown by Israelis. Several Israelis were arrested for attacking security forces who did intervene and a soldier on duty reported in Ha’aretz that “At the height of the incident, hundreds of Jews…started calling us Germans and spitting on us.”

After the attacks over the weekend, a Jewish Israeli activist who visited Hebron to express solidarity with Palestinians was beaten by an Israeli soldier and then arrested by the Israeli police; a second soldier taunted another activist on camera that he was the law while sporting an illegal patch on his uniform emblazoned (in English), “One shot. One kill. No remorse. I decide.”

Our visit the preceding Thursday had been much quieter. We showed our passports and waited for military permission to walk on Shuhada Street, seeing permanently shuttered shops and, to protect against thrown stones, cages on the balconies of homes of the handful of Palestinians who remain. We were taunted by Jewish settlers, including a member of Kenesset and Hebron’s official Jewish spokesperson. The IDF is reported to have been surprised by the degree of violence from settlers and visitors over the weekend. To many in our group, the potential for violence felt close to the surface, most especially in the aftermath of a right-wing victory in Israel’s recent elections. Its eruption was not inevitable but neither was it the least bit surprising.

I deeply believe that Israel has a right to exist and to take action guided by high standards of military ethics to ensure the security of its residents. What is unfolding in Hebron is the realization of an ethnonationalist vision that is qualitatively different from security. It is antidemocratic and oppressive, and in profound contrast the promise articulated in the Israeli Declaration of Independence:

The State of Israel… will foster the development of the country for the benefit of all its inhabitants; it will be based on freedom, justice and peace and envisaged by the prophets of Israel; it will ensure complete equality of social and political rights to all its inhabitants irrespective of religion, race or sex; it will guarantee freedom of religion, conscience, language, education and culture; it will safeguard the Holy Places of all religions…

Reconstructing Judaism’s vision is to build and promote diverse, connected and engaged Judaism that meaningfully contributes to a just and compassionate world. Being Jewish is not an end in and of itself but rather a means toward being the best possible human being, the best possible citizen of the planet. We foster particularism in the service of universalism, with the understanding that our lives are bound up in the lives and well-being of others. We reject the concept of the Jews as the chosen people–a concept that can too easily lead to prejudice. Married to state power and equipped with a powerful military, prejudice can cross over to oppression. This is what is happening in Hebron.

As we drove away from Hebron, I again took up my sweater and saw that I had made an error several inches back. With sorrow, I realized I had no choice but to rip out many rows to correct it. I thought about all the time that work had taken. I thought about what I wanted the sweater to be. I pulled the yarn, watched the rows unravel and resolved to begin again.

About the Author
Rabbi Deborah Waxman, Ph.D., is president and CEO of Reconstructing Judaism.