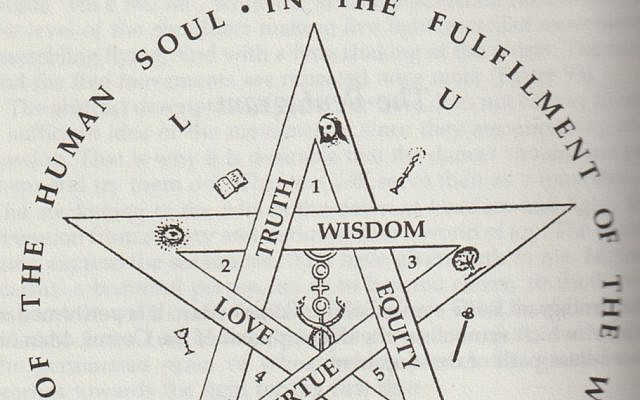 The Center of the Pentagram traces the Path of the Initiate with five new steps, which are also symbolized by five figures placed one above the other: two intertwined serpents, a circle, a cross, again a circle and an inverted up semicircle.

The entry into the Sixth Heaven is connected with the Sefirah Gevura (Judgment), with the Day of Resurrection. At the end of every cosmic cycle the CREATOR opens the Books of records of everything that happened and integrates all the past into one single wholeness. In this wholeness the CREATOR: a) reveals the whole Messianic Line of Divine Masters and Personifications of the Divine Feminine, which HE sent for elevation of humankind in the various historical epochs; b) sees how all past generations responded to HIS Divine impulses; c) in accordance with their responses sends some into the outer darkness with the gnashing teeth beyond the order of the Azilutic sefirot and others back into the Olam Ha-Ba, ‘the World to come’, that begins after the Olam Hazeh, ‘This World’, is dissolved (Z’ev ben Shimon Halevi, A Kabbalistic Universe, Kabbalah Society, 2007, p. 245).

Thus, the Indo-European cycle concludes with the Day of Resurrection and the Day of Judgment. These are dramatic events for which we have to be prepared. In our collective work we have many prayers, meditations and spiritual events connected with the Day of Resurrection and the Day of Judgment. In my book, Celestial State on Earth, The Project, there is a specially designed program for the Day of Resurrection. This archetype is also described in great detail in my books The Second Coming and Journey to the Heavenly Jerusalem, led by the Light of the Messiah. As to the collective spiritual work, in many International Assemblies on the sacred mountain Rila in Bulgaria our group has dedicated special days to this apocalyptic event with many lectures, prayers, meditations, music and sharing.

In order to introduce some ideas about the reality of the Sixth Heaven as the Day of Resurrection, it is appropriate to use the symbolic Figure Pentagram by the World Teacher Beinsa Douno (Please, see the Figure of the Pentagram at the end of the text). In it the Master Beinsa Douno describes, through many symbols and pictures, the evolution of the human being from ordinary earthly consciousness, through the blossoming of the human soul, up to the awakening of the higher Divine Self and union with God. To a great extend, the Universal Figure of the Pentagram could be compared with Jacob’s Ladder of  human evolution.

There are dozens of descriptions and interpretations of the symbols of the outer and inner circles of the Pentagram, which reveal: a) the five lessons in the evolution of the common human being (the outer circle); b) the five steps on the Path of the Disciple (the inner circle of the Pentagram). The symbols in the outer circle, describing the life of the common human being in the material world (Asiyyah) are The Sword, The Cup, The Book, The Candle, and The Sceptre. They are part of the Great School of Life (marked with the three artistically outlined letters arranged in the shape of a triangle).

The symbols in the inner circle of the Pentagram (the figure of the Pentagram) trace the Path of the Disciple in the World of Formation (Yezirah) and indicate the development of spiritual virtues: 1. The Ladder that Leads to a Door (Truth); 2. The Divine Spirit (Righteousness); 3. The Steep, Stony Road and the Narrow Door (Love); 4. The Eye (Wisdom); 5. The Tree of Life (Virtue). Each picture in this Inner Circle symbolizes great trials and living experiences on the Path of the Disciple, so that the Disciples can build their spiritual bodies and enter the world of the Universal Soul. In the circle around the whole Pentagram there is a formula artistically articulated: IN THE FULFILMENT OF THE WILL OF GOD LIES THE POWER OF THE HUMAN SOUL.

For the Centre of the Pentagram the Master Beinsa Douno mentioned that it is connected with the greatest trials and transformations on the Path of the Initiate, in the World of Creation (Beriah). In this regard, penetrating into the mysteries of the Centre of the Pentagram is an exciting spiritual task associated with passing the exams and receiving the blessings of the Sixth Heaven – the Resurrection!

In order to experience the Pentagram, and in particular the Centre of the Pentagram as an Initiation, it must be considered as a symbol of the blossoming Tree of Life within the human being – i.e. as passing through a spiritual awakening (the outer circle), through the Path of the Disciple (the inner circle) and entering into the Path of the Initiate (the Centre of the Pentagram). Naturally, this is connected with great trials on the spiritual path of human beings passing through the Day of Resurrection and receiving the blessings of the Sixth Heaven!

The Centre of the Pentagram traces the Path of the Initiate with five new steps, which are also symbolized by five figures placed one above the other: two intertwined serpents, a circle, a cross, again a circle and an inverted up semicircle. The Two intertwined serpents are a symbol of the supreme trials of the mind and heart that the disciple must pass in order to leave the earthly world of polarities.

The Centre of the Cross is associated with supreme trials, awakening of the Higher Self, and experiencing the Second Resurrection. This is the successful completion of the Mystical School of the Spirit. In St. John’s Book of Revelation, the Cosmic Christ proclaims this spiritual achievement (3:12): The one who is victorious I will make a pillar in the temple of my God. Never again will they leave it. I will write on them the name of my God and the name of the city of my God, the new Jerusalem, which is coming down out of heaven from my God; and I will also write on them my new name.

The Upper circle is merging with the Divine Spirit and achieving full self-realization. It also symbolizes apostleship and co-creation with G-d: To the one who is victorious, I will give the right to sit with me on my throne, just as I was victorious and sat down with my Father on his throne. (Revelation 3:21)

The Semicircle, turned upwards, symbolizes the connection with the Absolute Origin of Being, the First Cause, the CREATOR, about Whom the Master Beinsa Douno says: There is One who is Love, Wisdom and Truth.  Only One!  And all living Nature speaks about this One, the Great. They call Him Lord, God, Father. He pervades everything, permeates the whole Being, envelops the entire world, all solar and stellar systems, and still He remains hidden, unrevealed. Throughout the whole of eternity He shall not reveal Himself, for being the Absolute, the Eternal, He is without form.

After passing successfully the great trials at the Centre of the Pentagram, on the Day of   Resurrection and Union with G-d, the Initiate sings the Hymn of the Great Soul and blesses the CREATOR with all his heart: Great are You, Lord, great are Your Deeds, great is Your Name above all! Thus, the Initiates are blessed to pass through the Centre of the Pentagram, to ascend to the Heaven of Heavens, to join the 144,000 Initiates around the Throne of God, who sing the song of the New Creation (Revelation 14:1-3).

This is how the Pentagram symbolically represents the essence of the human being, created in the image and likeness of G-d, as the Crown of Creation, ascending through the whole vertical structure of Creation for merging with Metatron and finally with the CREATOR! Inspirational images of these Self-realised Universal Beings are the great Divine Masters and Manifestations of the Divine Feminine, with Whom we have to merge and to co-create in the next Seventh Heaven! 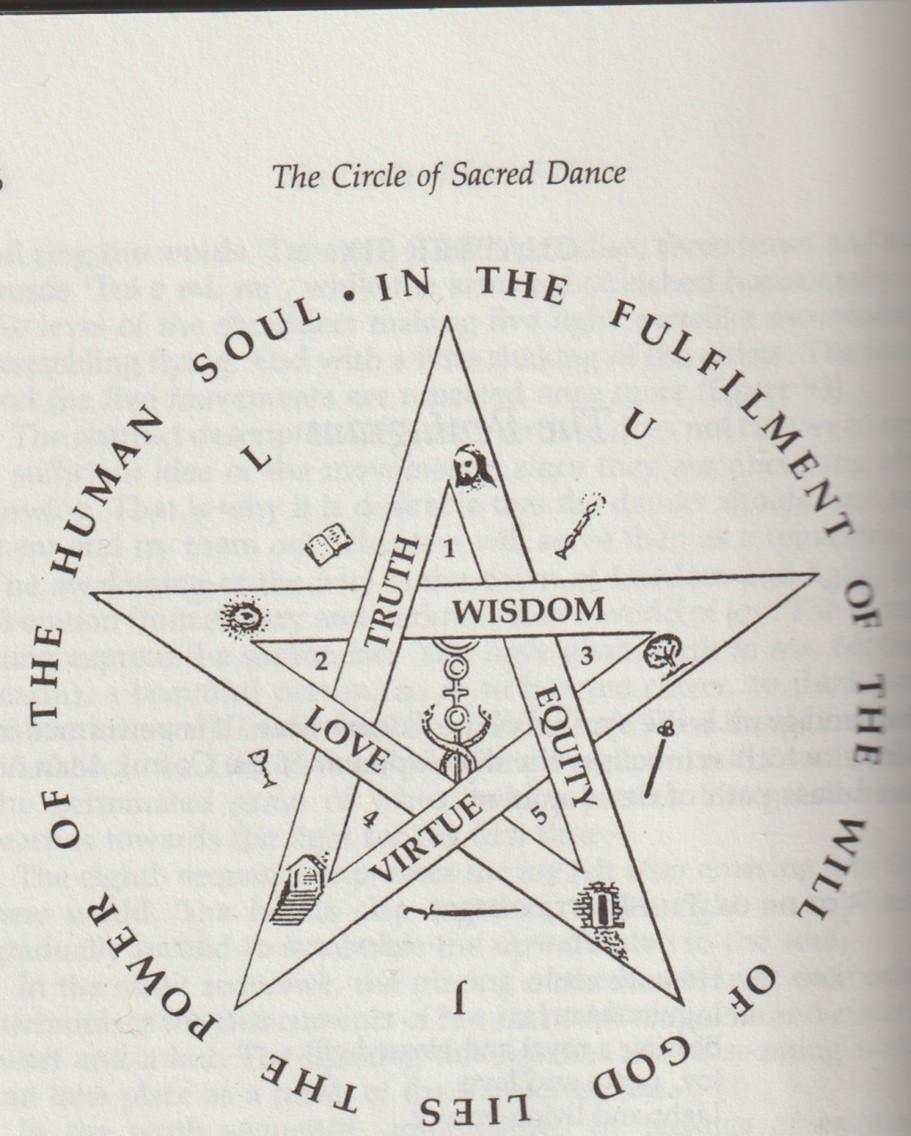