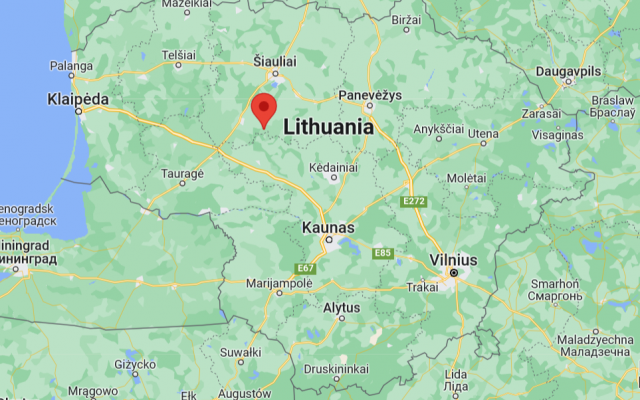 THE SLAUGHTER OF JEWS IN THE LITHUANIAN TOWN OF TITOVENAI

Titovenai is in Raseiniai county, thirty kilometers from Raseiniai, eighteen kilometers from Kelm and 42 kilometers from Shavl. Not far from town are the highways connecting Raseiniai to Shavl and to Kaunas. About forty Jewish families lived in town, mostly retail merchants and artisans. Jews had begun small industrial enterprises in town. There was already a tannery owned by a Jew, and a pottery factory owned by the Jew Kaplan and his family. There were also a few Jewish farmers. Titovenai was a summer resort, and the local Jews earned their livelihood in the summer. The town contained a synagogue, a study house, a traditional religious school for young children and a small library.

The attitude of the local Lithuanian neighbors to the Jews was good, even after the Red Army arrived in Lithuania in 1940.

All of the information which Basye Bloch possesses concerning Titovenai, she acquired in Shavl and then in the Shavl ghetto.

Mrs Miriam Hak (nee Flayshman in Titovenai) fled Titovenai with her two small children, aged nine and twelve, and went to a brother of hers in Shavl. At the same time, Mrs Kaplan fled Titovenai and went to Shavl. Both of them arrived in Shavl about three weeks before the Shavl ghetto was sealed. Basye found out from the two women:

After the Germans entered the town, the local population was overjoyed. The forester Ruseckis became the municipal chief. A teacher from the village of Gudeliai, six or seven kilometers from Titovenai, became the head of the partisans.

For about three weeks after the Germans arrived, Jews lived peacefully in their houses and kept their shops open. There were no special regulations announced regarding the Jews; they didn’t have to wear yellow patches. All authority was in the hands of the Lithuanian partisans. The Germans did not stay in the town. They only marched through.

During the third week after the Germans came to town, policemen and partisans arrested a total of about 20 or 25 Jewish youth, both boys and girls. They were all accused of being Communists during the year of Soviet rule, or of holding Communist positions. Everyone was taken to prison in Raseiniai, and it was impossible to learn anything more about them. Among those arrested there were also a few middle-aged Jews who had held innocuous positions under the Soviets.

Among those arrested was Moyshe, the husband of Miriam Hak. Her twelve-year-old son walked to Raseiniai “to find out about his father.” He stood near the prison for an entire day, but did not see his father.

Among those taken to the Raseiniai prison were:

Miriam Hak listed all of the arrestees, but Basye does not remember any more of them.

The younger women and girls of Titovenai had to work every day. Partisans guarded them while they worked. Once, when the women were cleaning out the streets and pulling out grass from between the paving stones, the municipal chief went by and said sadly: “It’s a shame to kill such nice girls.” Shmuel Bender’s daughter Taybe went home and told her father, who was very well liked in town and was an excellent scholar. He was the town politician. Shmuel just laughed at what his daughter said.

One time the Lithuanian Antanas Niutautas, a former member of the Shaulys gun club during Smetona’s time, came to Miriam Hak’s home. He advised Hak’s family to lose no time, not to worry about their possessions, and to get away from town to Shavl as quickly as possible by night, so that no one would see and no one would know. Niutautas assured the Jews that preparations were being made to shoot all the Jews in town. He advised them not to start a panic, and to escape to Shavl.

That same day, at 3:00 a.m., everyone heard the commotion of trucks which drove up and stopped in the middle of town. Shouts were heard in the street: “Let’s cut up and shoot the Jews!” In the dark night, there was banging on all the windows of the Jewish houses. The next thing that was heard was the weeping and screaming of women and children.

Miriam recalled the warning and advice of Niutautas. She quickly grabbed her two half-dressed children, and while the partisans were knocking on the front door, Miriam managed to run out of the house through the back. Near Miriam Hak’s house stood the study house, on a high foundation. She crawled under the foundation with her two children and hid. From there she heard the screams and weeping of women and children who were beaten and driven out of their houses in their sleep. Miriam stayed under the foundation for a day and half of another night, without food or drink, with two half-naked children. Around two or three a.m. the second night, Miriam and her children fled town to a certain peasant, with whom she had placed some of her possessions at the beginning of the war. The peasant was afraid to keep Miriam. He got a wagon, and sent her to Shavl to be with her brother.

A short time later the people from Titovenai in Shavl found out that the same night the partisans drove the Jews out of their houses, they had driven them into the forest at the edge of town, onto Shapiro’s mountain (Shapiro Kalnas), and they shot everyone there in the morning. This was at the beginning of the second week of August 1941.

Miriam and her children went into the Shavl ghetto. They lived through great material difficulties there. She decided on a bold move. She left Shavl and returned to Titovenai. She had left some of her things with Sharap, a teacher in town. When she arrived in town, she went to a female tailor whom she knew named Kalesauskiene. Miriam sent the teacher’s wife a letter by way of the tailor, asking her to send back some of her things with the tailor. The teacher’s wife sent some things back with the tailor, asking Miriam to leave town as quickly as possible, because she wasn’t certain of her husband.

Miriam left town and went to a peasant she knew in a village, with whom she had also left some of her things. The peasant gave her some of the things and also advised her to leave the village as quickly as possible, because as she left the town, peasants had spotted her, and everyone in the village already knew about her.

Miriam followed the advice immediately left the village, and returned to the Shavl ghetto in peace. It was the spring of 1943.

While she was spending a couple of days with the tailor in Titovenai, Miriam went to visit the mass grave of the Jews of Titovenai, on Shapiro‘s Mountain. When she returned to the Shavl ghetto, Miriam told Basye about everything.

Basye was taken with all the Jews from the Shavl ghetto to Stutthof, Germany. There she again saw Miriam and her two children, whom she had saved from the children’s action in the Shavl ghetto. Miriam’s two children were taken from her in Stutthof. Basye did not see Miriam again.

The witness Basye lost her children in the children’s action in Shavl: her seven-year-old son Elye, and her five-year-old Shmuel, aged five. Among the murderers in town Basye remembers: