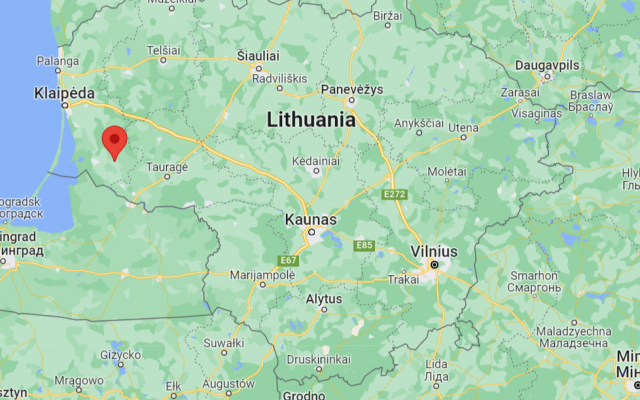 My speech at the Cape Town Holocaust and Genocide Center on October 27, 2022 is here:

Lithuania did not punish a single Holocaust perpetrator, instead, the government of Lithuania deem many of the murderers as their national heroes.

The collective testimony of the surviving Jews from Neishtot:

The Jewish Population; Its Employment and Cultural Situation

When the war broke out, approximately 100-110 Jewish families were living in the town. Most of them were retail merchants and artisans, and there were a few farmers as well. The town’s mill and an electric power station were owned by a Jew named Shloyme Rabin.

The Jews Lapin, Goldberg and Epshteyn owned large manufacturing concerns. There was a good deal of trade with Memel, where Jews sold meat and agricultural products. After Memel was annexed by the Third Reich, trade dropped significantly. In general, however, the economic situation of the Jews was not bad. Many Jews received assistance from their relatives overseas.

Relations with the local Lithuanians were not good. The anti­semites were very active there. After the Memel region was annexed to East Prussia, there began a brazen, open anti-Jewish agitation in town. During the year of Soviet rule the situation improved. The antisemites stopped their open agitation against the Jews.

The Outbreak of the War

In the early morning of Sunday, June 22, 1941, shots were heard near the border. One hour later, the Germans were in Neishtot. 32 German soldiers fell in battles with the Red Army. Rumors that local civilians had shot the Germans were immediately spread in town.

At about 10 or 11 a.m. of the same Sunday, the Germans drove all of the residents of the town, Christians and Jews, into the Evangelical Church. The women were immediately released.

All of the men were kept in the church under heavy watch until the afternoon of Monday, June 23. A German Wehrmacht major came and announced in Russian and German that the civilian population was suspected of shooting at the Germans. They had already made a decision to shoot every tenth man. An investigation proved that Russian officers had dressed in civilian clothes and shot at the Germans. All of the men were released from the church.

On Monday, June 23, 1941 at twelve noon, a light automobile carrying SS men, arrived in Neishtot from Heidekrug. The SS men arrested a Jew named Mende Vinik, his son Pesekh, and Mikhe Elert. The three Jews were interned in the Heidekrug prison.

The military commandant of Neishtot at that time was named Hirsch. He assured everyone that three men who had been taken away were in a camp and were working. Later this was ascertained to be true.

From that Monday on, all the Jews had to distinguish themselves by wearing a yellow armband. Mende Vinik’s daughter Yehudis, had also been a young Communist during the year of Soviet rule. After the Germans arrived, Lithuanians established the civil administration in town. A police force and partisan group were formed. Their first action was to arrest Yehudis Vinik and lock her up in a cellar. She was tormented for several days, and then taken to the edge of town. Next to the outhouse not far from Morozow’s house, near the Shvekshne bridge, they shot and buried her. This was during the second week of the war.

At the end of the third week of the war, Germans and Lithuanians arrested five Jewish girls. It is not known where they died and in what circumstances.The five girls were:

The Bonfire of Holy Books

At the end of the second week of the war, Germans and partisans captured some thirty Jewish men and took them to the synagogue. They had already gotten axes and hammers ready. They forced the thirty Jews to break the lecterns and benches and carry them outside. With tears in their eyes, the Jews had to carry the Torah scrolls and holy books out to the courtyard and stand in a circle. Rabbi Paklibak was forced to ignite the bonfire. It is not known who actually lit the fire. The rabbi, however, categorically refused. The men around the fire had to stir it so that it would burn better.

Jews at Forced Labor; A Ghetto for Jews

On Thursday, June 24, 1941, partisans began driving the Jews to do various tasks on the roads and in the marketplace in town. They forced the women to wash the floors in the barracks. Every morning the men had to report to the courtyard of a building near the bridge. From there they were taken to work at various jobs until the evening, when they were allowed to go home. Lithuanian foremen or partisans kept watch while they worked. They teased and bullied the Jews while they worked.

On Friday, July 18, 1941 the Lithuanians ordered all the Jews to move into a few streets in a neighborhood near the edge of town, on the far side of the Shushta River. The Jews were given one day to carry out the order. They were allowed to take everything along. Because of the shortage of space in the designated ghetto, most of the furniture and other items remained in town, and Lithuanians “inherited” it. Before the war only Jews had lived in the neighborhood where the Jews had to settle in, a ghetto. Partisans took everything remaining out of the Jewish houses into the synagogue, and later sold it to Lithuanians at auction. The empty houses were immediately sealed.

The Slaughter of the Men of Neishtot

On Saturday, July 19, 1941 at 10 a.m., the partisans ordered all the men over the age of 14 to come to the synagogue yard. At 10 o’clock the Jews began to assemble. The synagogue yard was already being guarded by armed partisans, and no one could leave.

All of the sick and elderly men were taken away from their homes on wagons and brought to the synagogue yard. Children up to the age of 12 or 13 were sent home.

A partisan read a list containing the names of all the Jewish men. If anyone was missing, he was searched for at home.

The infamous Dr Schau was at the synagogue yard, together with his adjutants Jaksht and Dembrowsky. The healthier men were lined up in rows, followed by the wagons bearing the elderly and sick. In this fashion the men were driven through the town. Their wives and children stood by their houses, weeping bitterly. The healthier men were driven to the courtyard of the local barracks outside of town, and herded into a horse barn. Some time later SS men arrived and picked out 40 of the healthier, younger men.

They took the rest of the men out of the barn. The elderly and sick who had been brought on wagons were not taken into the barn at all. The SS men forced the men who were less healthy to climb onto a truck. They asked whoever felt sick to tell them so. 15 of the 40 men still in the barn complained of various illnesses. Only 25 men remained in the barn. Partisans kept watch around the barn.

Several hours later they reassured the Jews they knew, and cheerfully announced that all of the elderly and sick on the wagons, as well as the 15 sick men who had been chosen from the barn, had been shot in a forest not far from the village of Shaudvitz.

Late in the evening the 25 men in the barn were placed into a truck and brought to the marketplace in Neishtot. From there SS men and Lithuanians accompanied each man home, so that he could gather some things and a package of food.

That same Saturday night all 25 men were taken to a camp at the Kalvelishkis compound in the town of Heidekrug, where they spent the night.

The men from Vainute were brought to the Heidekrug camps in trucks together with the men from Neishtot. One truck contained the possessions of the men who had been shot. Several of the survivors recognized things belonging to their fathers, brothers and acquaintances.

Among those who were shot in the Shaudvitz forest on July 19, 1941 were the following men of Neishtot:

Two men were selected during the medical examinations by the doctor in Heidekrug. They were not taken to any of the camps, but kept in Heidekrug. The location of their deaths is not known. Their names are:

The men in the camps received little news about the women, children and a few older men who had remained in the ghetto. One man from Neishtot wrote a letter, and sent it by way of a Lithuanian whom he knew. Many of the men received letters by way of the same messenger. In the letters that the women wrote, was the expression: “We are also on the way.” Details concerning their death are lacking.

The surviving men of Neishtot found out from peasants that all of the women and children, and the few surviving men, had been shot in a forest near the village of Shaudvitz (Shaudvitsiai).