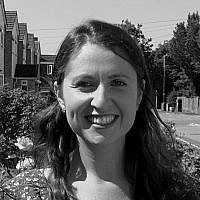 The Blogs
Rachel Blain
Apply for a Blog
Please note that the posts on The Blogs are contributed by third parties. The opinions, facts and any media content in them are presented solely by the authors, and neither The Times of Israel nor its partners assume any responsibility for them. Please contact us in case of abuse. In case of abuse,
Report this post. 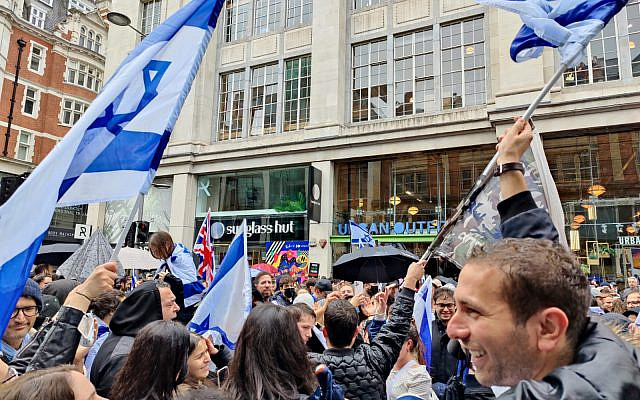 Pro-Israel demonstrators in the centre of London (Via Jewish News)

My sister lives in Tel Aviv. I work for a pro-Israel campaign in the UK, and I am a British Jew.

It is safe to say all three things have kept me glued to my phone and laptop these past few weeks, and I have not liked it one bit.

Since the beginning of Operation Guardian of the Walls, there has been a misinformed social media storm against Israel. It is a battlefield I have entered not only because of my job but because I want to share my sister’s story – the story of Israelis running to bomb shelters in the middle of the night, living in them by day.

I want the world to know the reality of Israelis living under fire which is underrepresented on social media. It is vital people speak up about it and condemn rocket attacks, but this article is not a call to socials action in its entirety, it is about how seeing one-sided posts makes me feel.

One-sided posts, posted by celebrities and magazines (looking at you Teen Vogue) come into two categories. The first category is posts about Sheikh Jarrah and/or the Israeli occupation. No mention of the rockets firing into Israel, no mention on the harm caused on both sides, no mention of the situation in real time.

Celebs/influencers have taken a snippet of the conflict, posted it, and made out they are being nuanced about the whole situation when in fact they are not commenting in the moment.

The second category is those who are trying to sound peaceful to all their followers, writing a heartfelt Instagram story saying, “we hope there will be peace”, but at the same time talking about ethnic cleansing, the occupation, colonialism. Not one post has said they deplore rocket attacks, not one post has said Jewish lives are also innocent and sacred. It has had the effect of perpetrating more violence.

It also has had the effect of Jewish people feeling extremely small. When I scroll through my Instagram, reading the stories of celebrities I follow for personal reasons, I realise we actually don’t have any real cultural connection or shared moral paradigm. It is not enough that I am British and they are British, and I may or may not have watched them on tv and like their podcasts.

Because when there is a war in Israel I don’t have the luxury of hiding behind my Britishness. I don’t have the luxury to choose to be first British, because people are posting on social media, probably without much thought (and definitely without enough knowledge) that Jewish lives don’t matter. I can hide in British society all I want but I’m still a Jew and the silence condemning rocket attacks is deafening.

I am not alleging antisemitism in this, I just think people are extremely naive and do not realise the harm they are doing perpetuating one narrative. They are isolating me as a Jew and many others too, saying we don’t fit in, saying we don’t matter.

And that is where blatant antisemitism comes in. Two weeks ago, in Golders Green a car drove past a kosher restaurant with its passengers screaming “free Palestine”. Outside the Chelsea stadium an Israeli flag was set alight by pro-Palestinian activists due to the Jewish ties of the club. Two weekends ago a pro-Palestinian  car mob drove round the streets of predominantly Jewish areas flying their flags, hooting their horns and calling for ‘Jewish daughters’ to be raped.  Chelsea is not Israel, Golders Green is not Israel and Jewish people are not Israel. Blaming Jewish people, going out of your way to distress a Jewish person, is antisemitic.

To the many social media posts condemning Israel and keeping silent on the rocket attacks into Israel, it is important to note one thing. Israelis are not Israel. Israelis are not the Israeli government. Israelis are not a certain Israeli policy you do not like. And Israelis certainly are not all Jewish (which should not be a reason for you to suddenly say something because Jewish lives should also be enough and are enough). They are Druze, they are Muslim, they are Christian too and they are all under the same rocket fire. Stop saying or in this case silently implying that Israeli lives don’t matter. Because they certainly do.

When you choose to stay silent, when you choose to not condemn rocket fire (over 4000 if that makes a difference) all of Israel are hurting. Not the Israeli Government, but the innocent children (and every other civilian) running to bomb shelters in the middle of the night. Your silence is hurting them, and your silence is hurting Jewish people both in the UK, Israel and beyond.

The social media intifada that has taken place has now manifested itself onto the streets and into schools in the UK and the US. Driving around London, cars are driving with the Palestinian flag and school children are shouting free Palestine in large huddles. It is a luxury granted to them by unapologetic social media campaigns. I can’t even step out my house wearing a Magen David let alone wave an Israeli flag. Jewish boys are being told to cover their Kippas in public. This is way beyond Free Palestine, it is an assault on Jews.

In the last week the Palestinian flag has become the symbol of hatred for some Jews. The people perpetrating this hatred are doing nothing for the Palestinian cause. It is not bringing the hope and possibility of peace closer, it is instead isolating Jewish people and reminding them why the State of Israel is so important.

Social media gets stronger by day. Think before you post, even if you want to offer your hope for peace, because both Palestinians and Israelis need peace. Perpetuating incorrect facts is doing nothing to bring a speedy peace, it is creating barriers, isolation and fear. Coexistence and understanding needs to happen now.