Today, like most Friday’s and sometimes during the week, I joined Ta’ayush accompanying the shepherds of Uja. From year to year, settlers backed by security forces, limit more and more the lands from which shepherds can earn a living.We just learned that, despite repeated police efforts to remove them, the hilltop youth have defied orders, and reestablished the outpost from which we were attacked in April.

Omer has been here some 11 years in a huge growing outpost that is illegal, even according to Israel. However, that doesn’t keep security forces from doing his bidding. When we first started accompanying these shepherds about a month ago, one of the settlers tried to drive a ATV through the flock.  On the other hand, the police and local commander seemed to understand that there was no real security of other justification for preventing the shepherds we were trying to protect from grazing in the area, quite far from the outpost.  Then, a new commander arrived.  He either wanted to flex his muscles, and/or was willing to do the bidding of Omer.  Every day there is a renewed 24 hour closure for an increasingly wide area around Omer’s farm.

Today, in addition to the closure orders, soldiers were stationed at all the junctions leading to the area, selectively deciding who could come in and out of even the areas that weren’t closed.  At the first junction, the officers stopped one car, but let my car through.  We were heading away from Omer’s Farm to meet shepherds outside the closed area, when we approached another flying checkpoint stopping people from going in.  We thought the soldiers were going to ignore us.  However, when we were almost passing them, one moved towards the middle of the road.  He gave a vague hand gesture asking us to stop. As I started to brake, he kicked a row of spikes underneath my car (He must be a soccer player in civilian life.), puncturing one of my tires.  He seriously endangered us, and we were lucky that we only had a punctured tire.  Undoubtedly influenced by his stereotypes of who human rights activist are, he maintained later that I wasn’t stopping. I told him that people call me many things, but not a liar.  I had to ask countless times for him to identify himself before he finally gave me his first name.  Later, he gave me what turned out to be a fictitious family name.  However, when the police arrived, they prevailed upon him to allow me to photograph his ID. 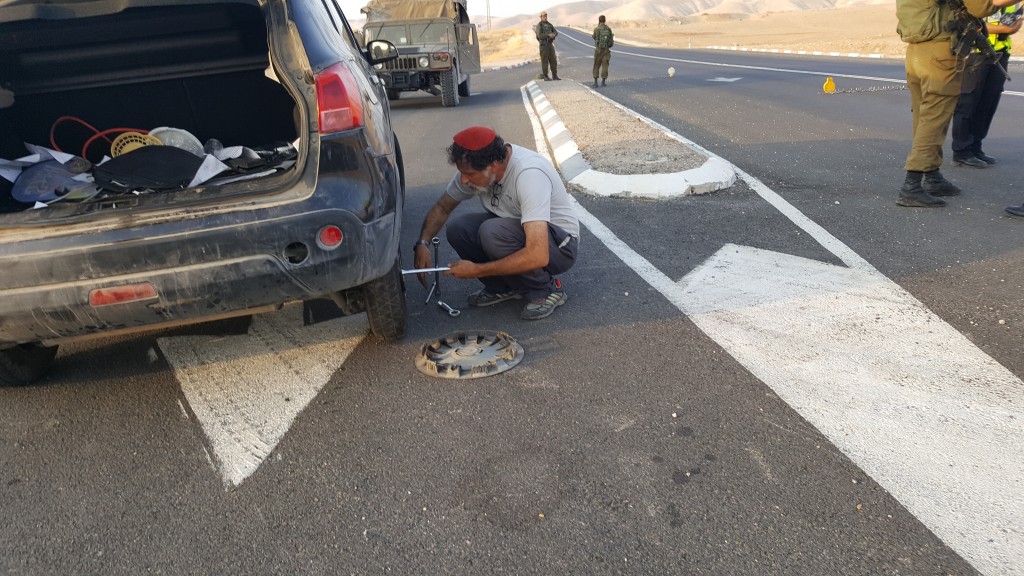 We went on to join the shepherds at different locations.  Where I was located, the army decided after several hours (Or after being given marching orders by Omer) that we were still in forbidden area.  Our reading of the map was different.  Nevertheless, it gave me the opportunity to have a long conversation with another officer, who told me that he sleeps well at night and was somewhat taken aback when we explained to him how he was part of  a system making it increasingly difficult for the shepherds to put bread on the table.  I reminded him of the former Air Force Commander and Chief of Staff Don Halutz saying that he slept well after dropping bombs that killed civilians.  (Assuring him that I didn’t think his actions were comparable.)  I acknowledged that he was in uniform, and following orders.  However, I reminded him that he is also a human being, a citizen and votes.  He must remember what he saw and what he was asked to do next time he enters the voting booth.  I explained why, even if he had to follow orders, and even army officers have to make tough choices that human rights activists don’t have to make, I would feel much better if he said he was troubled by what he has to do.  I would be even happy if he said he slept well, after struggling with tough choices. 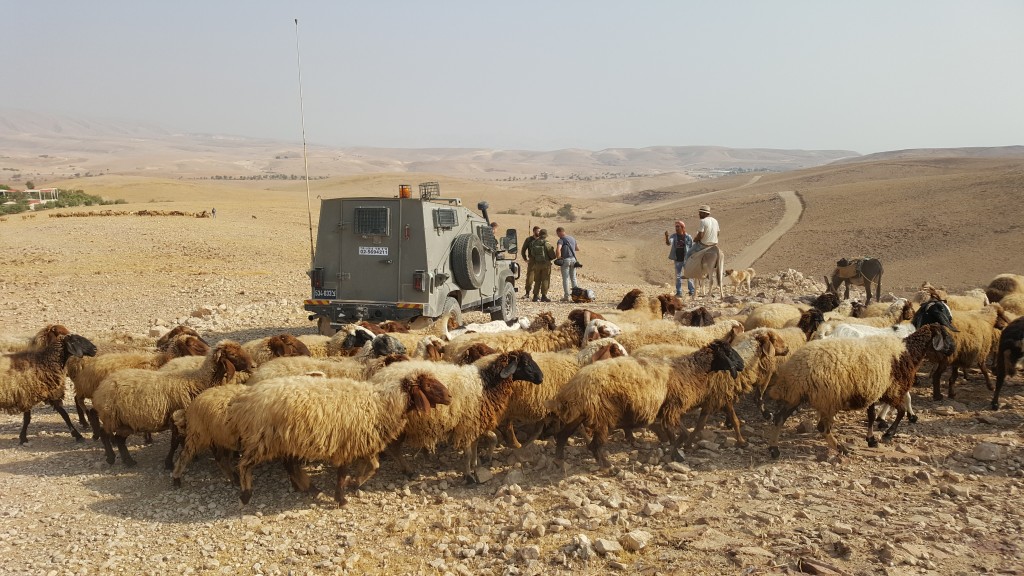 And, we spoke of Torah.

This week’s portion, which admittedly also speaks of merciless war against the specific nations that the Talmud says no longer exist, opens,

“You shall appoint judges and officers  for your tribes…and they shall govern the people justly.  You shall not pervert judgment. You shall not show partiality. You shall not take bribes, for bribes blind the eyes of the intelligent and lead to misrepresenting the words of the just.  Justice, justice shall you pursue, that you may thrive and occupy the land that Adonaai your God is giving you” (Deuteronomy 16;18-20).

It turns out that bribes are not always financial in nature, and it is not only money that blinds the eyes of those who are good, decent and intelligent.  The various officers I encountered today were not rough or unpleasant or nasty people.  At least one of them maintained that he bore no ill will towards Palestinians.  The officer who punctured my tire eventually offered me to help fix it.  (I didn’t accept.)  I don’t know if that impulsive act to kick the spikes under my car represented who he usually is.  I do think that these soldiers are part of what Erving Goffman termed a “total institution.” I have spoken to many former soldiers who woke up one day to ask “What am I doing.” They were blinded to what they were doing because they were engulfed every waking moment by an entire system with an internal logic making actions that they would normally not take seem to be the natural and logical thing to do.

Perhaps these soldiers are also blinded by an admired settler who is “redeeming” the Land of Israel, making them willing to do his bidding.

Our God and God of our Ancestors may it be Your Will that we, our judges, and our officers be impartial pursuers of justice. May we understand that justice demands that even a Palestinian shepherd has the right to make a living here in this sacred Land.