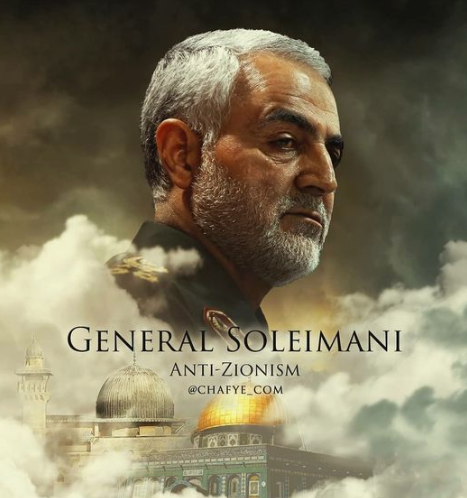 The al-Quds Force that Soleimani commanded was so-named during the Iran-Iraq War. Quds, of course, means “Jerusalem,” and the force was so named to shame the Sunni Muslims arrayed against the Shiite Iranians. This poster was published much before Soleimani’s death. (Chafye Art, Iran)

In October 2019, Qasem Soleimani granted an unusual one-and-a-half-hour interview to the Khamenei.ir webpage. The head of the al Quds Force of the Iranian Revolutionary Guards bragged of the 33 days he spent advising Hizbullah leaders during the 2006 war against Israel.

More than 160 Israelis were killed, many of them civilians, by Hizbullah’s 4,000+ rockets. A quarter of a million Israelis were forced to evacuate Israel’s north. Hizbullah’s launching of the war and indiscriminate shelling — with Iranian-supplied rockets and weaponry — earns Soleimani and friends a spot high on the list of most wanted international criminals.

Who were Soleimani’s agents, deputies, hired guns, and partners in the many crimes against humanity?

When Gen. Qasem Soleimani was killed on January 3, 2019, members of the Iranian Islamic regime were inconsolable. The man was immediately beatified as a holy Muslim Shahid [martyr] on Supreme Leader Khamenei website, which posted a painting of Soleimani being met at the gates of Heaven by Mohamed’s grandson, Imam Hussain, Ayatollah Khomeini, Imad Mughniyeh, Iraqi militia leader Abu Mahdi al-Mohandes, and others. 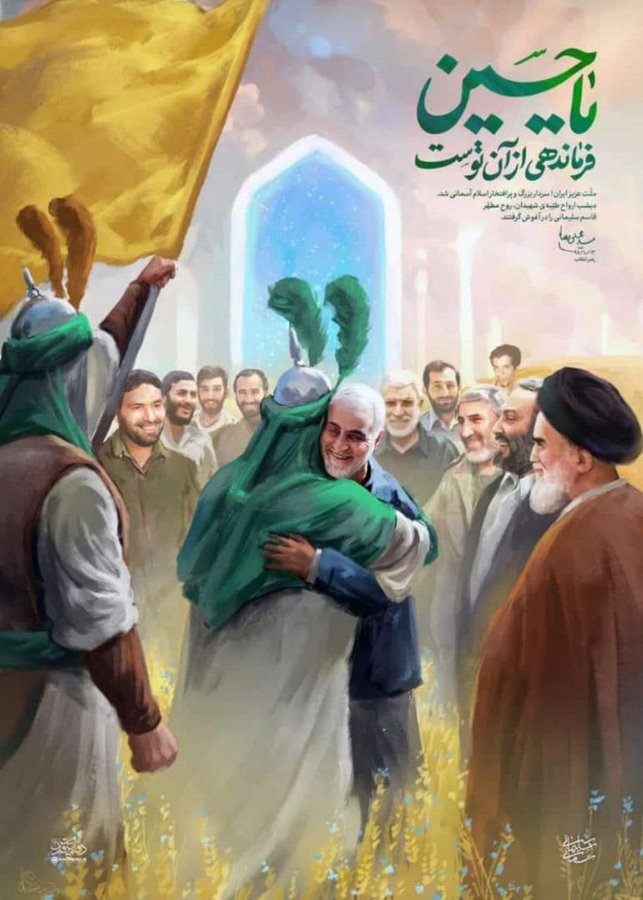 While the Iranian Ayatollahs grieved for their accomplished and murderous warrior, many people in the Middle East were relieved and even celebrating his demise, particularly Sunni Arabs, Saudis, Lebanese, Kurds, Israelis, and even some brave Iranians. They had felt the pain and exile inflicted upon them by Soleimani’s soldiers, militias, and terrorists.

Incredibly, some American politicians and Leftist agitators are denouncing the assassination of the international war criminal, who was responsible for the murder of tens of thousands in Iraq, Syria, Iran, Lebanon, and Israel. They mistook the massive cortege as supportive of Soleimani’s policies and the Ayatollah regime, rather than the rent-a-crowd or mandatory imposed event Iranians had to attend. Today, Iranian crowds across the country are risking their lives and tearing down posters of Soleimani and Khamenei.

These critics of the U.S. action need to see who Qasem Salamani’s known associates were.

A former intelligence source gave me the yellowing picture below of Soleimani and two of his friends – Hizbullah’s military head, Imad Mughniyeh, and political head, Hassan Nasrallah. But I didn’t know the date or the happy occasion – until I recently found the original picture from which the yellow one was cropped. 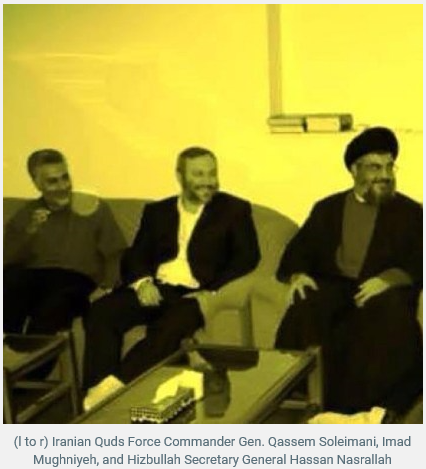 This rarely-seen picture below was taken after the Hizbullah-Israel war in 2006 and before Mughniyeh’s assassination in 2008. In Soleimani’s last interview in October 2019, he bragged about his 33 days in Beirut advising Hizbullah’s Nasrallah and Imad Mughniyeh,  the infamous terrorist chief responsible for killing thousands in bombing attacks across the world.  The picture was taken when the three went to Iran to report on their “successes” against Israel. Sitting beneath the Iranian flag, they briefed Ayatollah Khomeini’s grandson. 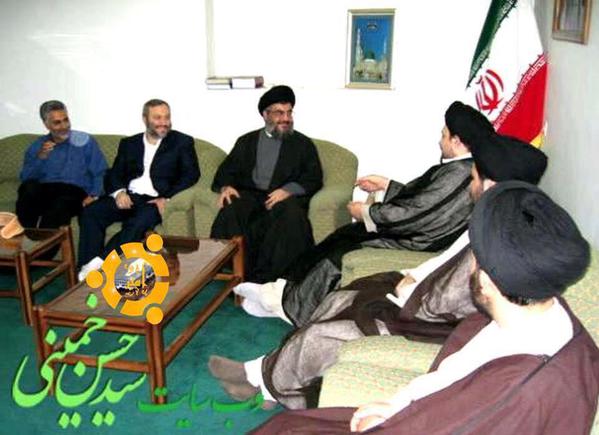 The full picture of Suleimani escorting his colleagues to see the Ayatollah’s grandson.

Imad Mughniyeh was blown up in Damascus in 2008 in an attack attributed to the CIA and Israel’s Mossad.  Imad’s son, Jihad, was taken under Soleimani’s wing and was about to command a Hizbullah force on the Golan Heights opposite Israel when he and several Iranian soldiers were killed in an Israeli bombing attack. Soleimani promised to avenge the Mughniyehs deaths. 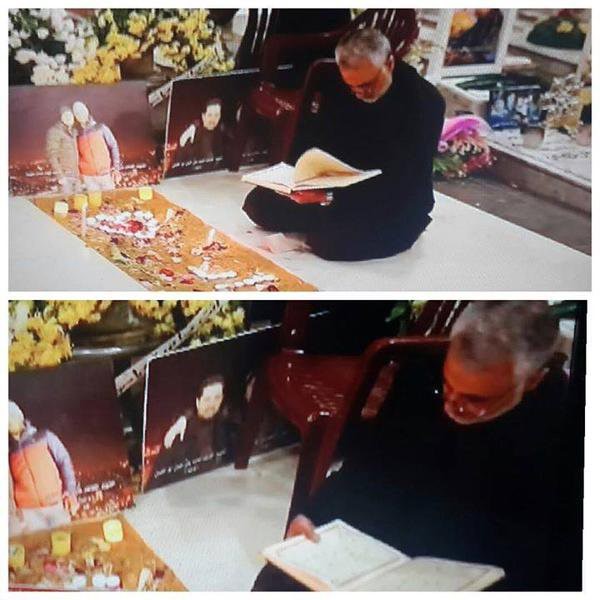 Soleimani praying at the graves of Imad and Jihad Soleimani 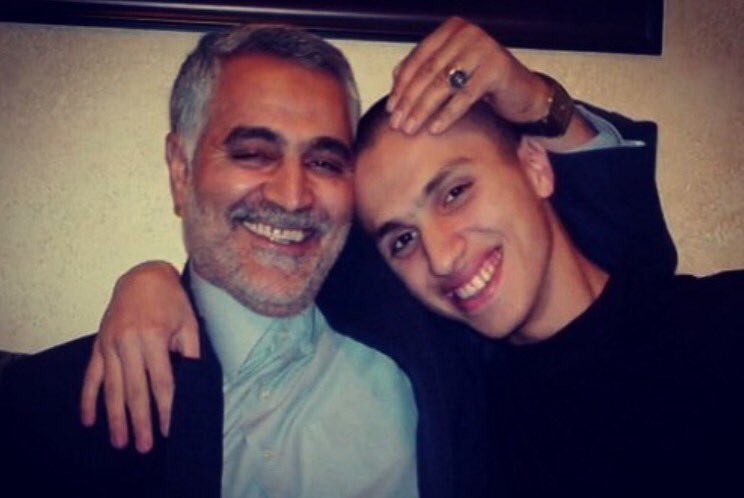 Qasem Suleimani hugging his ward, Jihad Mughniyeh, whom he was grooming to head a Hizbullah military presence on the Golan Heights.

The Islamic regime in Iran founded Hizbullah already in the 1980s. The Iranian training, radical Shiite indoctrination, weaponry, and political direction all served as the model for Iranian infiltration of Syria, Iraq, Yemen, and Bahrain. In each country, Soleimani undermined governments when he established armed groups that, under his tutelage,  grew into militias. Like Hizbullah, these militias then evolved into armies with officers corps, defined units, rocketry and missiles, artillery, drones, and even tanks, in some cases. Soleimani added mercenary militias consisting of Afghani and Pakistani fighters. 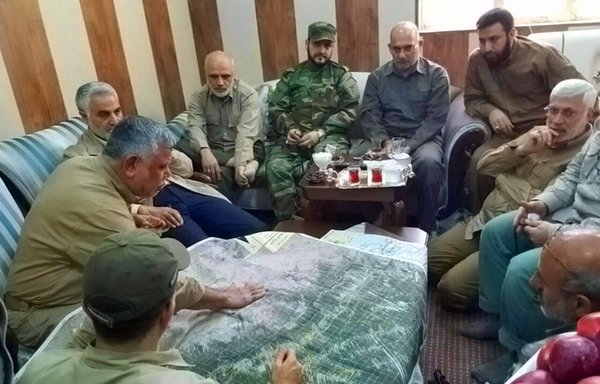 Iranian Gen. Soleimani kept close contacts with his Iraqi militias, which included the Badr organization, Kataeb Hizbullah, Harakat al-Nujaba, and Asaib Ahl al-Haq. This picture was taken in his Fallujah Joint Operation Center in May 2016. This picture shows two leaders of the Iraqi Hashd al-Shaabi (Popular Mobilization Forces), Hadi al-Amiri, pointing at the map, and Abu Mahdi al-Muhandis, with the white hair, sitting opposite Soleimani.

The leader of Iraqi PMF militia, Abu Mahdi al-Muhandis, was killed in the attack on Soleimani’s convoy on January 3.

Both al-Muhandis and al-Amiri led their militias in the attack at the U.S. Embassy compound in Baghdad’s Green Zone a few days earlier on December 29, 2019. Note the man in the white turban. He is another militia leader, Qais al-Khazali. 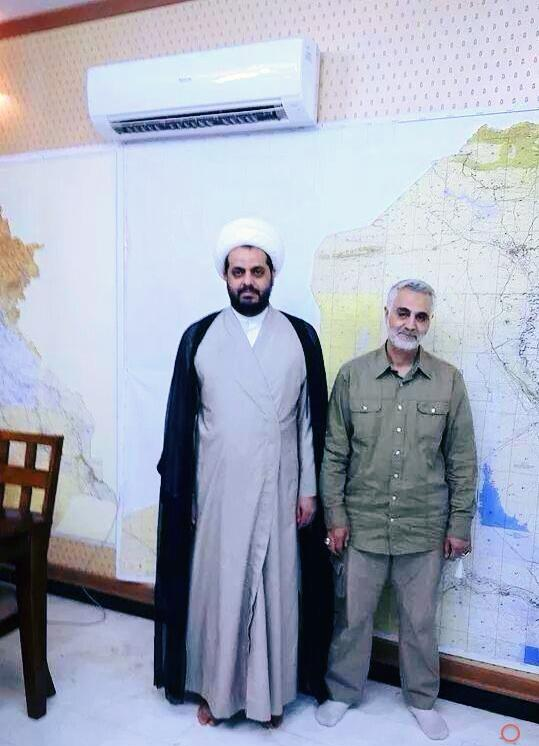 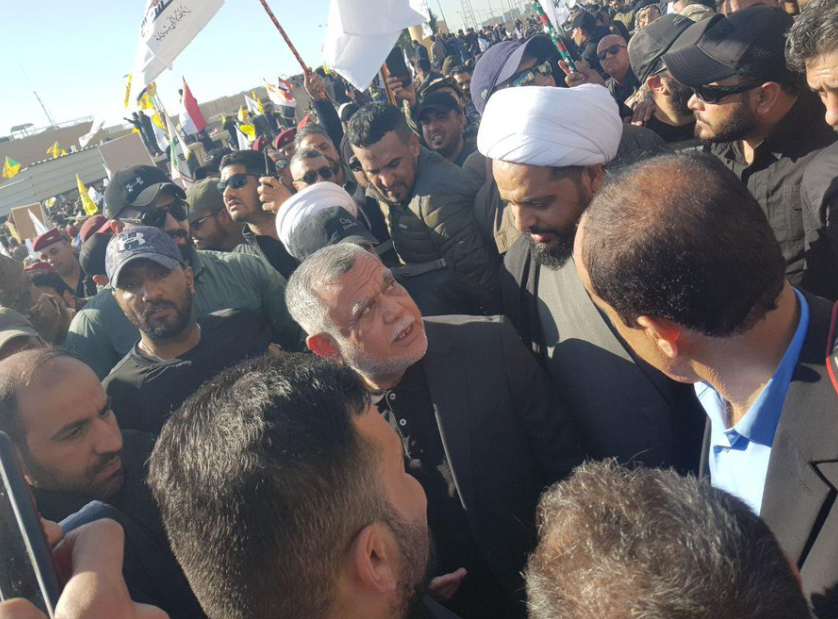 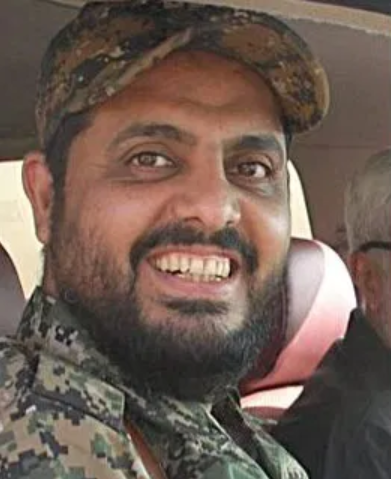 In 2017, al-Khazali showed up in southern Lebanon in his combat fatigues as the guest of Hizbullah, who gave him a tour of the border with Israel. The commander of the Asaib Ahl a-Haq militia, declared, “I‘m here with my brothers from Hizbullah, Islamic Resistance. We announce that we’re fully prepared and ready to stand as one with Lebanese people with Palestinian cause in the face of unjust Israeli occupation.” 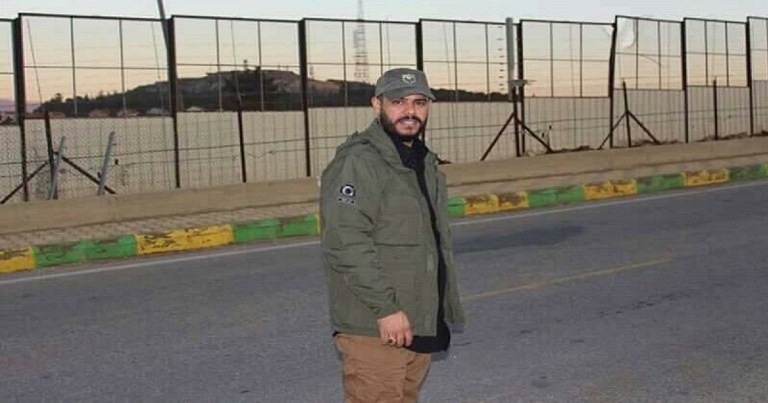 Another visitor, Hamza Abu Abbas, the commander of the Iraqi Al-Bakr Brigade militia stationed in Syria, standing near the border with Israel.

From Soleimani’s Foreign Legion: Afghani fighters on board Iranian commercial flights heading to the Syrian front.

The al-Quds commander would frequently visit his proxy militias in the field and pose with them for pictures, such as those below: 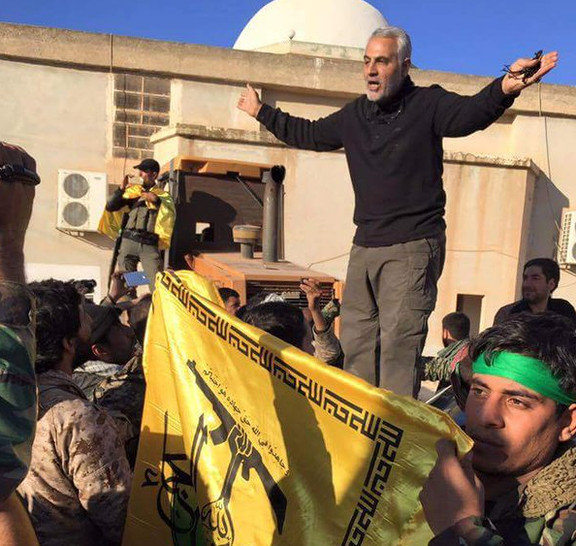 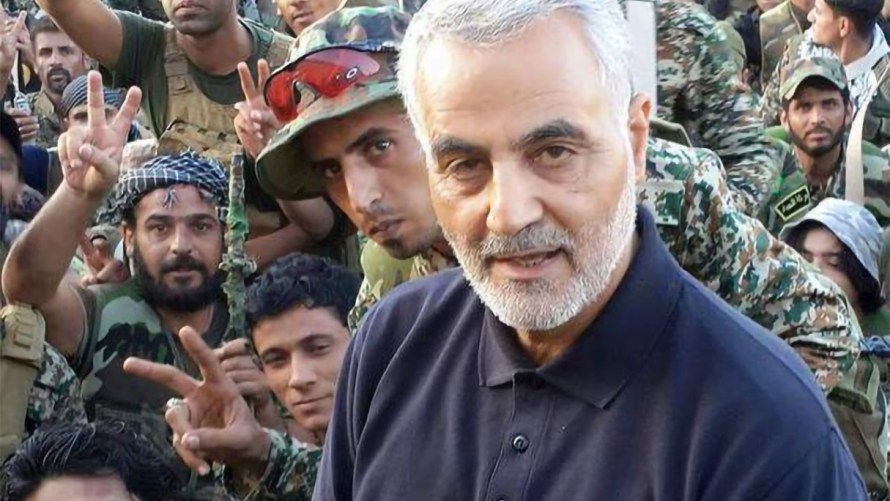 Soleimani with his Iraqi men fighting in Aleppo, Syria. 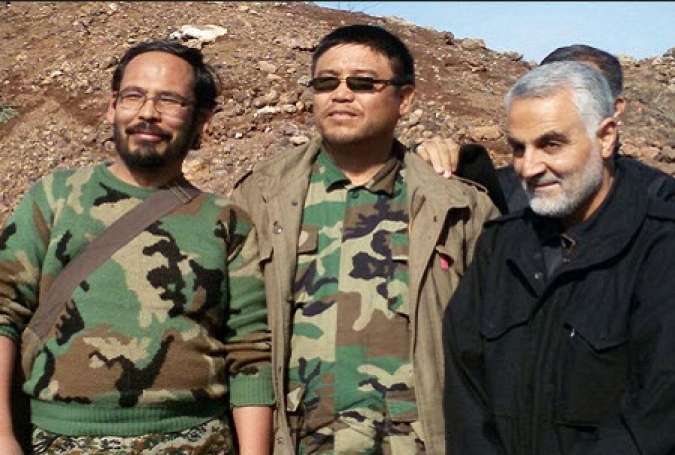 Soleimani with commanders of the Fatimiyoun Afghani fighters in Syria. The man in the middle, Alireza Tavasoli, also known as “Abu Hamad,” was killed in fighting in Daraa, Syria. and buried in Iran with six other Afghan fighters.

Soleimani’s Quds Force has also trained and dispatched a Pakistani corps, “the Zainebiyoun” to fight in Syria. Like their Afghani counterparts, they also took heavy casualties. Below is Soleimani with a ragtag group of fighters whose nationality is unknown. 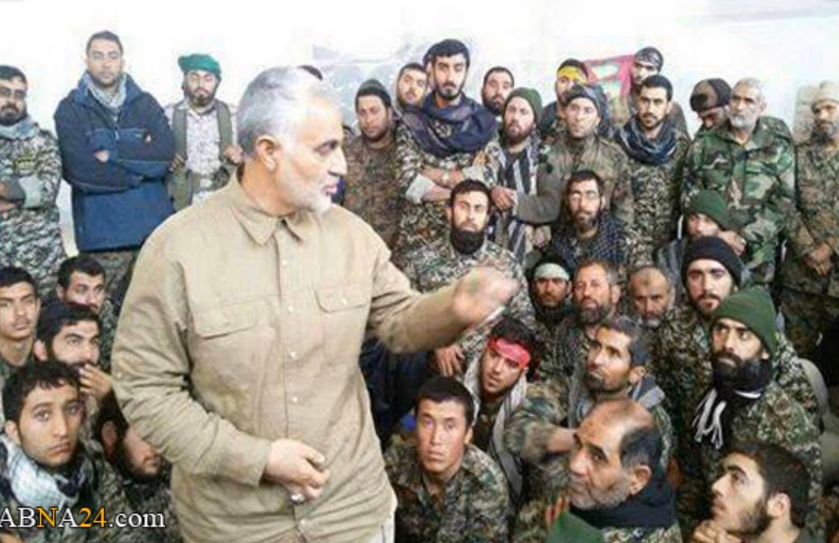 The picture appeared in ABNA 24, a Shiite news aggregator based in Qom.

Iran established Hizbullah in Lebanon and assists terrorist organizations in Gaza with one purpose: destroy Israel.  That said, a nearly cosmic anomaly is evident in Iran’s support for two Sunni proxies, the Palestinian Islamic Jihad (PIJ) and Hamas, affiliated with the Muslim Brotherhood. Both organizations in Gaza are funded, trained, and equipped by Iran and its Revolutionary Guard. The rockets, missiles, drones, and even tunnel know-how are provided to them all, with Hizbullah serving as the pivotal member of Iran’s foreign legion.

Huge shipments of weapons for the Palestinian groups on commercial vessels have been blocked on the high seas. Iran tries to circumvent detection by shipping weapons in its naval ships. 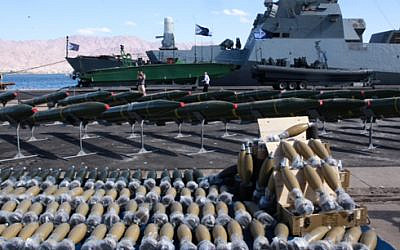 The Kloc-C ship was captured in 2014. It was loaded with Iranian missiles, mortars, ammunition, and cement. 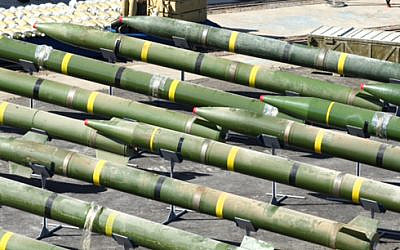 Israeli intelligence had tracked the shipment from the docks in Iran. It was destined for Hamas.

The ties between the Gaza terrorist groups and the Soleimani are seen in the pictures of the al Quds commander with the head of PIJ, Ziyad Nakhala, and Hamas head, Ismail Haniyeh, delivering the eulogy at Soleimani’s funderal. 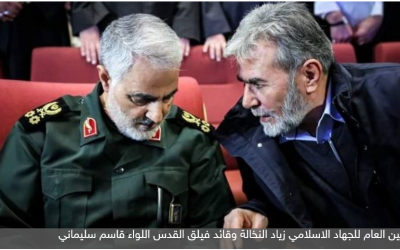 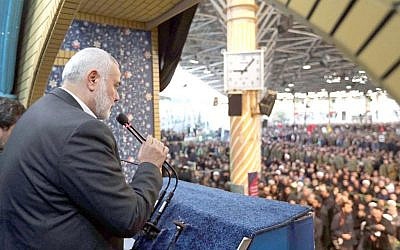 Haniyeh delivering his eulogy for Soleimani in Iran.

Why was Haniyeh given such an honor? Because the “resistance” against Israel is so deeply ingrained in the Ayatollah regime. Look at the place of honor the two men were given at the funeral: right behind the Iranian leadership. 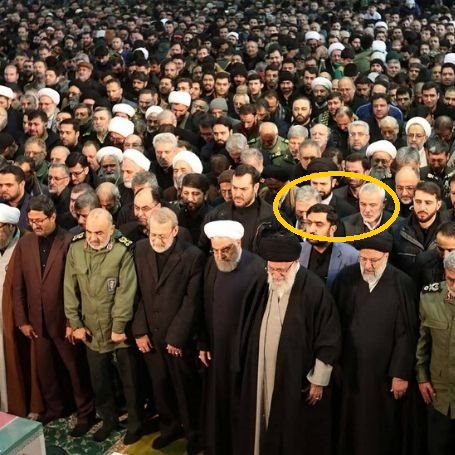 The Iranian regime’s credo can be hear in the words of Qasem Soleimani, “The blood of Imad [Mughniyeh] will be avenged by the removal and uprooting of the child-killing Zionist regime.”

About the Author
Lenny Ben-David served as a senior Israeli diplomat in Washington. He is a public affairs consultant and publishes israeldailypicture.com. Ben-David is the author of "American Interests in the Holy Land Revealed in Early Photographs."
Comments