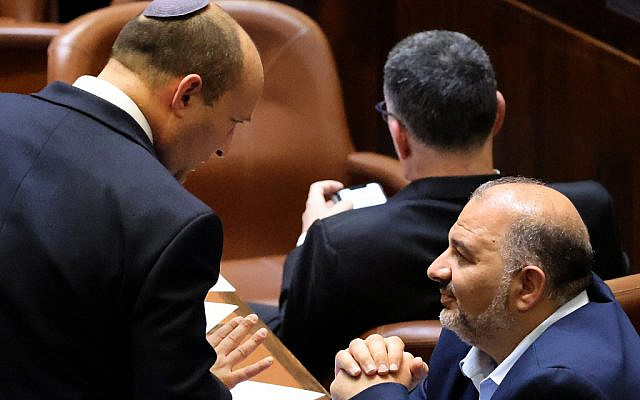 Prime Minister Naftali Bennett (L) talks with Mansour Abbas, head of the Islamic Ra'am party, during a special session to vote on the new government at the Knesset in Jerusalem, on June 13, 2021. (Emmanuel Dunand/AFP)

Before the eulogies begin for this strange, wildly disparate, increasingly dysfunctional and soon-to-collapse government, let’s pause on its first anniversary to celebrate its extraordinary achievement.

In creating a government representing Zionist parties from the right, left and center with fundamentally opposed visions of the country’s territorial borders and cultural identity, the coalition has proven one of its key assertions: that what unites Israel’s Jews is ultimately more compelling than what divides us. Pushing back against his vehement critics on the right, Prime Minister Naftali Bennett has repeatedly invoked the “shared tent” of Jewish Israelis, bound by a covenant to defend the state. The left, Bennett reminds the right, aren’t enemies but “achim l’neshek,” brothers in arms.

If it had succeeded only in creating a model of Israeli Jewish cooperation across seemingly irreconcilable divides, this government would deserve our gratitude, the blessing of “dayenu:” For this alone, it was worth the effort. But the government went one step further: It created a model for a shared Israeli civic identity between Arabs and Jews. For the first time, an Arab party became a key component in a government coalition, breaking a mutual taboo: Jewish parties didn’t trust the loyalty of Arab politicians, some of whom have supported terrorist attacks against Jews, while Arab MKs refused to share ministerial responsibility for Israeli military actions.

This government has in effect recognized that Zionism is responsible for the well-being of two peoples. Zionism both recreated the Jewish people and created a new people, the Israelis. While the two peoples obviously intersect, they are not identical. A government faithful to the full complexity of the Zionist achievement assumes responsibility for Israel as a Jewish state and as the state of all its citizens.

The implicit tradeoff for Arab-Jewish cooperation is Jewish acceptance of the Israeli-democratic identity of the state, a commitment to full equality for all its citizens, and a reciprocal Arab acceptance of the state’s Jewish identity. That is precisely the tradeoff this government has modeled. Creating an historic precedent, Mansour Abbas became the first head of an Arab party to accept Israel’s Jewishness. Israel, he said, was founded as a Jewish state and will remain a Jewish state. He spoke those stunning words in Hebrew and then repeated them in Arabic, to ensure that there would be no misunderstanding of his intent.

For years we Jews have rightly insisted that the core of the Palestinian-Israeli conflict is the refusal of Palestinian leaders (including Palestinian citizens of Israel) to come to terms with our indigenousness in this land. Abbas delivered; yet many Israeli Jews, especially on the right, have dismissed his outreach or ignored it altogether.

Abbas, whose Islamist Ra’am party has roots in the Islamic Brotherhood and was once close to Hamas, is the least likely candidate for the role of national healer. But this government has proven that when Jews truly own Israel’s democratic identity and treat Arabs as equal players, an opening is created for Arab acceptance of Israel’s Jewish identity. That dynamic will be a long and slow process; much of Abbas’s party has followed him only reluctantly. But Abbas, who is denounced by Hamas as a traitor and is the target of death threats, has taken a step from which there is no turning back.

In a recent meeting with fellows at the Shalom Hartman Institute, Abbas explained to us the logic behind his break with traditional Arab Israeli politics. The Arab parties insist that first the Jews must fulfill their demands and then we’ll agree to sit with them, he said; our approach is to sit with the Jews as partners and together try to find solutions.

Abbas also shared with us something of his transformation. Participating in interfaith meetings with Jews, he said, helped him understand how little he understood about Judaism and Jewish history, and realized that the perceptions among many Muslims about the Jewish people were mistaken. He was touched by the faith of the religious Jews he encountered and mentioned as a formative influence his friendship with the late Menachem Froman, rabbi of the West Bank settlement Tekoa and Israel’s leading visionary for Muslim-Jewish reconciliation. Rabbi Menachem was one of those uniquely Israeli personalities who transcends easy categorization; Mansour Abbas is another.

The alternative to this government of dual national reconciliation – between Jews and Arabs, between Jews and Jews – is the unraveling of Israeli cohesion. The opposition, led by Benjamin Netanyahu, has declared war against both Jewish unity and Arab-Jewish reconciliation. Netanyahu’s coalition includes Itamar Ben-Gvir, spiritual heir to the late racist rabbi Meir Kahane, who rushes to the scene of terror attacks to incite Jewish mob violence against Arabs. In the 1980s, when Kahane would address the Knesset, Likud prime minister Yitzhak Shamir would lead his party in a demonstrative walk-out; now Kahane’s heirs may serve in a future Netanyahu cabinet.

Whether or not Netanyahu is found guilty of corruption in his current trial, he is already guilty of corrupting Israeli politics. On Netanyahu’s watch, Kahanism has become a legitimate position within the Likud itself. Likud MK Miri Regev has declared Israeli democracy superfluous, while Likud MK Mai Golan says there is no practical difference between her and Ben-Gvir.

Netanyahu, whose only goal in becoming prime minister is to legislate an end to his legal troubles and for whom any tactic is legitimate, is the most divisive leader in Israel’s history. His coalition has violated the most sacred elements of the Israeli ethos, what used to be called “mamlachtiyut,” upholding the dignity of the state, from dispatching hecklers to interrupt Bennett’s speech to bereaved families on Memorial Day to boycotting Knesset committees and turning the plenary into an arena of relentless mockery and vulgarity. Netanyahu has refused to meet with Bennett for the security briefings that he, as head of the opposition, is mandated by law to attend. Netanyahu supporters have hounded rightwing Knesset members who dared join this coalition, threatening their wives and children.

Netanyahu once promised to bring to Israel the “can-do” spirit of American efficiency and creativity. Now, though, he has brought us the dysfunctional America of fake news and political hatred.

Israel is divided by two visions. But that divide, it turns out, doesn’t run between religious and secular, left and right, or even Arab and Jew. Instead, the divide is between the camp that is committed to the hard and frustrating work of strengthening our common identity, and the camp that relentlessly pries open our schisms and wounds, the multiple ethnic and ideological fault lines that threaten our fragile cohesiveness. One is a coalition of healing; the other, a coalition of hurban, national ruin.

Given the alternative that awaits us if Netanyahu returns to power, it is frankly unbearable to watch the government’s unraveling, the ease with which renegade MKs defect to the opposition or attempt to hold the coalition for ransom. But however this government ends, its vision of an Israel striving for its highest aspirations will remain as an option. For that too, this government deserves our blessing of dayenu.

About the Author
Yossi Klein Halevi is a senior fellow at the Shalom Hartman Institute, where he is co-director, together Imam Abdullah Antepli of Duke University and Maital Friedman, of the Muslim Leadership Initiative (MLI), and a member of the Institute's iEngage Project. His latest book, Letters to My Palestinian Neighbor, is a New York Times bestseller. His previous book, Like Dreamers, was named the 2013 National Jewish Book Council Book of the Year.
Comments