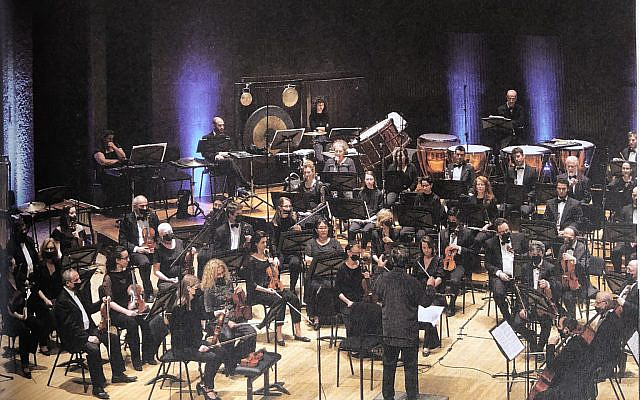 The concert season in Jerusalem resumed this week, and it was like meeting old friends, In fact, we did actually meet old friends. The first concert of the season of the Jerusalem Symphony Orchestra found us sitting in the packed Henry Crown auditorium of the Jerusalem Theatre. Together with us were many familiar faces, as well as friends and acquaintances from various walks of life whose paths have coincided with ours at one point or another, and whose friendship we have continued to cultivate, fertilized by our common love of music.

The orchestra was present to its fullest extent, crowding the stage with an impressive array of instruments, including an impressive brass section. Their virtuoso ability was stretched to the utmost in the music chosen for the evening. It started with four specially commissioned pieces by contemporary Israeli composers. Each piece was unfamiliar and did not make for easy listening, though none was longer than seven minutes. At the end of each piece Steven Sloane, the conductor, turned round to the audience and motioned to the composer concerned to stand up and take a bow. And after the last piece all four composers, three men and one woman, were invited on to the stage to take a collective bow. An admirable gesture obviously intended to encourage young Israeli composers.

The rest of the evening followed more traditional lines, with a stirring performance of Schumann’s piano concerto played by veteran pianist Elisabeth Levanskaya and, after the interval, Berlioz’s Synphonie Fantastique. This last draws on all the talents of every instrument in the orchestra, producing marvellous sounds, both pianissimo and fortissimo, but especially the latter. Berlioz knew his onions when it came to getting the maximum out of the orchestra, and it was emotionally stirring to see and hear the whole orchestra, together with the brass section and the extended timpani section, giving their all in the last movement of the symphony (Witches Sabbath).

The dry cough that sometimes afflicts me in concerts seemed to be kept at bay for most of the concert, and when it did choose to descend upon me it was luckily in the last movement, when any sound I made was well and truly drowned out by the massive noise produced by the orchestra. The sight and sound of two huge, highly-polished tubas doing their bit to produce a thrilling effect at the end was something I won’t forget in a hurry.

One can’t have a concert without an audience, and it is a pity that so many music-lovers in Israel don’t seem to know how to behave. At first I thought that some of the people sitting near me were suffering from Parkinson’s because they kept moving their hands, but when they managed to stop I realized that they were simply ‘helping the conductor.’ The worst culprit sitting near me, though fortunately not next to me, was an elderly lady who waved her hands around above her head to show her identification with the music. If the conductor hadn’t been standing with his back to her he might well have volunteered to let her take his place.