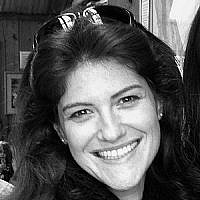 The Blogs
Marni Mandell
Apply for a Blog
Advertisement
Please note that the posts on The Blogs are contributed by third parties. The opinions, facts and any media content in them are presented solely by the authors, and neither The Times of Israel nor its partners assume any responsibility for them. Please contact us in case of abuse. In case of abuse,
Report this post.

Yesterday, my boyfriend’s mother asked how I was handling myself through this conflict. She said they were used to this, but I wasn’t from here, and it would be normal to be having a hard time.

Well, to tell you the truth, I am having a hard time – but for different reasons than she thought. With every BOOM my stomach lurches, remembering the BOOM that signaled a much different catastrophe from the second intifada when I was a few blocks from 2 different bombings. When a BOOM signaled the end to three dear friends lives. Today the BOOM is a sign we wait to hear with anticipation to know that the coast will be clear, as Iron Dome has come to our rescue.

And today with every siren that sounds we run for cover (at least some of us do) as it signals an incoming rocket to the general vicinity – whereas the sirens of 11 years ago signaled the deathly finality to a suicide attack gone massively wrong.

The juxtaposition of these sounds to being the opposite of what I’m “used to” is what causes the confusion. The very sounds that are supposed to save were what alerted death 11 years ago. And today, we are relatively safe – in fact significantly more so than those fateful years in Jerusalem during the intifada where anywhere at anytime could signal a tragedy that we were wholly unprepared for.

Today we are prepared, if anxious from the sounds. A generation of Israelis around the country will potentially grow up with PTSD – and while that is nothing compared to the loss of life of children on the other side – it is everything when you factor in how our children’s hearts will lurch sometime in the future anytime a garbage truck comes down the street at 6am making a loud BOOM.

The sounds this war makes has an infinite impact – and I pray it will end as quickly as possible.

About the Author
Marni Mandell CEO & Co-Founder of CareHood, public speaking coach and mentor to startups and speaker herself. She made aliyah in 2010, and has spent 20 years working in the Jewish community and hi-tech.
Comments