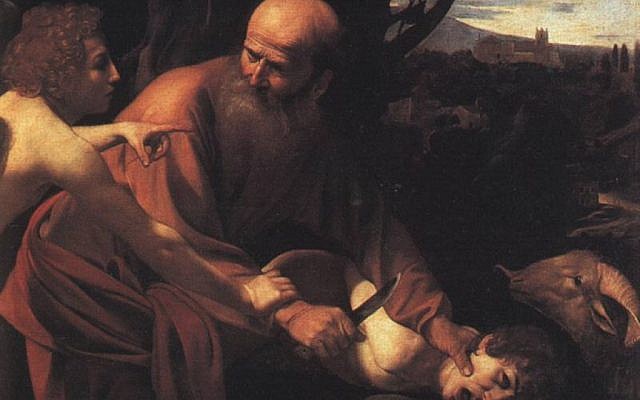 Bible scholar Tzemah Yoreh questions the common telling of the binding of Isaac -- the version that inspired Caravaggio -- in which an angel stops Abraham moments before he sacrifices his son. (Photo credit: From http://www.ibiblio.org/wm/paint/auth/caravaggio/isaac.jpgg/via Wikipedia)

The stories told in Bereishit chapters 21 and 22 — the sending away of Ishmael and the binding of Isaac — are among the hardest to understand in the whole of Tanakh. Both involve actions that strike us as almost unbearably harsh. But the difficulties they present go deeper even than that.

Recall that Abraham was chosen “so that he would instruct his children and his household after him to keep the way of the Lord by doing what is right and just.” He was chosen to be a father. The first two letters of his name, Av, mean just that. Avram means “a mighty father.” Avraham, says the Torah, means “a father of many nations.”

Abraham was chosen to be a parental role model. But how can a man who banished his son Ishmael, sending him off with his mother Hagar into the desert, where they nearly died, be thought of as an exemplary father? And how could a man who was willing to sacrifice his son Isaac be a model for future generations?

These are not questions about Abraham. They are questions about the will of God. For it was not Abraham who wanted to send Ishmael away. To the contrary, it “distressed Abraham greatly,” because Ishmael was his son (Gen. 21:11). It was God who told him to listen to Sarah and send the child away.

Nor was it Abraham who wanted to sacrifice Isaac. It was God who told him to do so, referring to Isaac as “your son, your only one, the one you love” (Gen. 22:2). Abraham was acting on both occasions against his emotions, his paternal instincts. What is the Torah telling us about the nature of fatherhood? It seems very difficult indeed to draw a positive message from these events.

There is an even deeper problem, and it is hinted at in the words God spoke to Abraham in summoning him to the binding of his son: “Take your son, your only son, the one you love—Isaac—and go [lekh lekha] to the region of Moriah. Sacrifice him there as a burnt offering on a mountain I will show you.” These words inevitably remind us of God’s first summons: “Go forth [lekh lekha] from your land, your birthplace and your father’s house” (Gen. 12:1). These are the only two places in which this phrase occurs in the Torah. Abraham’s last trial echoed his first.

But note that the first trial meant that Abraham had to abandon his father, thereby looking as if he were neglecting his duties as a son.[1] So, whether as a father to his sons or as a son to his father, Abraham was commanded to act in ways that seem the exact opposite of what we would expect and how we should behave.

This is too strange to be accidental. There is a mystery here to be decoded.

The barrier to our understanding of these events lies in the sheer abyss of time between then and now. Abraham, as the pioneer of a new kind of faith and way of life, was instituting a new form of relationship between the generations. Essentially, what we are seeing in these events is the birth of the individual.

In ancient times, and in antiquity in Greece and Rome, the basic social unit was not the individual but the family. Religious rituals were performed around the fire in the family hearth, with the father serving as priest, offering sacrifices, libations and incantations to the spirits of dead ancestors. The power of the father was absolute. Wives and children had no rights and no independent legal personalities. They were mere property and could be killed by the head of the household at will. Each family had its own gods, and the father was the sole intermediary with the ancestral spirits, whom he would one day join. There were no individuals in the modern sense. There were only families, under the absolute rule of its male head.

The Torah was a radical break with this entire mindset. The anthropologist Mary Douglas points out that the Torah was unique in the ancient world in making no provision for sacrifices to dead ancestors, and forbidding the attempt to communicate with the spirits of the dead.[2]

Monotheism was more than simply the belief in one God. Because each human was in His image, and because each could be in direct relationship with Him, the individual was suddenly given significance – not just fathers but also mothers, and not just parents but also children. No longer were they fused into a single unit, with a single controlling will. They were each to become persons in their own right, with their own identity and integrity.[3]

Such changes do not happen overnight, and they do not happen without wrenching dislocations. That is what is happening at both ends of the Abraham story. At the beginning of his mission, Abraham was told to separate himself from his father, and towards the end he was told to separate himself, in different ways, from each of his two sons. These painful episodes represent the agonising birth-pangs of a new way of thinking about humanity.

First separate, then connect. That seems to be the Jewish way. That is how God created the universe, by first separating domains – day and night, upper and lower waters, sea and dry land – then allowing them to be filled. And that is how we create real personal relationships. By separating and leaving space for the other. Parents should not seek to control children. Spouses should not seek to control one another. It is the carefully calibrated distance between us in which relationship allows each party to grow.

In his recent book on sporting heroes, The Greatest, Matthew Syed notes how important the encouragement of parents is to the making of champions, but he adds:

Letting go – that is the essential paradox of parenthood. You care, you nurture, you sacrifice, and then you watch as the little ones fly into the great unknown, often shouting recriminations as they depart. You will experience the stomach clenching pain of separation, but you do so with a smile and a hug, aware that the desire to protect and love must never morph into the tyranny of mollycoddling.[4]

It is this drama of separation that Abraham symbolically enacts in his relationship both to his father and to his two sons. In this world-transforming moment of the birth of the individual, God is teaching him the delicate art of making space, without which no true individuality can grow.

In the lovely words of Irish poet John O’Donohue our challenge is: “To bless the space between us.”[5]

[3] See Peter Berger, The Sacred Canopy, Doubleday, 1967, 117 where he speaks of “the highly individuated men” (and women) who “populate the pages of the Old Testament to a degree unique in ancient religious literature.”