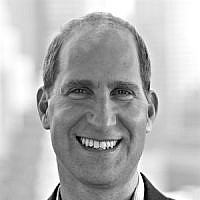 The Blogs
Simon Greer
Apply for a Blog
Please note that the posts on The Blogs are contributed by third parties. The opinions, facts and any media content in them are presented solely by the authors, and neither The Times of Israel nor its partners assume any responsibility for them. Please contact us in case of abuse. In case of abuse,
Report this post.

Jews in America and Israel are in uncharted territory. The Trump Administration proudly identifies itself as “pro-Israel” while at the same time maintaining close ties to political movements and ideologies that are riddled with anti-Semitism. This is not something we Jews have encountered since Israel was founded.

The conventional wisdom has long held that Israel and the US would only grow closer as anti-Semitism in America continued its long slide into obscurity and political irrelevance. The two trends were thought to be inexorable and inextricably linked, but a frightening and unforeseen thing happened with the election of President Trump.

Anti-Semitic rhetoric and incidents spiked during the 2016 campaign and have continued apace into the early months of the new administration. President Trump kicked off his inauguration with a sermon by right-wing pastor Robert Jeffress, who has declared that Jews are going to hell. One week in, the administration marked Holocaust Remembrance Day without even once mentioning Jews. And then there was Sean Spicer’s claim that Hitler never used “gas on his own people.”

These repeated gaffes are disconcerting, but I’m far more disturbed by the company that President Trump keeps, including fringe figures like chief strategist Steve Bannon, who reportedly didn’t want his children to attend school with Jews, and national security aide Sebastian Gorka, who has extensive ties to Hungary’s anti-Semitic far right. There’s no way around it. The longstanding taboo against anti-Semitism in the Republican Party has begun to crumble, and ties to anti-Semitic figures and thought are no longer an automatic disqualifier for serving in the White House.

This is why anti-Semitic Internet trolls and white nationalists have cheered on this president. Setting aside what Trump believes in his heart of hearts, and notwithstanding the deep ties to Jews in his personal orbit, he has been a godsend to anti-Semitic movements and ideologies once relegated to the margins of society.

Many establishment Jewish organizations in the US are hesitant to speak about this pattern and name it for what it is. Having worked for decades within a paradigm where we have seen anti-Semitism recede and ties between Israel and America grow ever closer, members of our community seem at a loss now that those trends seem to be moving in opposite directions.

Trump administration officials like Attorney General Jeff Sessions and Energy Secretary Rick Perry – not to mention short-lived National Security Adviser Michael Flynn and others — have deep ties to extreme elements of the Religious Right, white nationalist alt-right, anti-immigration movement and European far right. These ties have been instrumental in advancing the visibility and political clout of anti-Semites.

This is a dangerous development for the Jewish community, to be sure, but also for other ethnic and religious minorities targeted by the far right. We must not ignore the problem as many in our community narrow their focus to how Trump will otherwise uphold America’s commitments to Israel.

Opinions will vary on what pro-Israel looks like these days, and whether the administration lives up to the label. Given the mixed signals coming from Trump, we will need time for the administration’s policies and practices to shake out before reaching a conclusion. But in making that determination, we must not ignore the fact that Trump has embraced and emboldened political figures whose far-right ideologies are highly suspicious of – if not outright hostile to – Jews and Judaism. This cannot be good for Israel.

As an American Jew, I am familiar with requests from Israeli Jews asking us to take action to protect, defend and support Israel. Again and again we have, and will continue, to rise to the challenge. I’m writing today to ask you to stand up for American Jews, and all Jews, when Trump visits Israel next week.

It’s critical, for all of us, that you challenge Trump to explain why his chief strategist Bannon expressed admiration for Charles Maurras, the notorious French anti-Semitic philosopher and Nazi collaborator. Or why he is protecting Gorka, who is facing calls for resignation after it was revealed that he swore allegiance to a Nazi-allied group in Hungary. These are but two of many disturbing connections that Trump must account for.

Our community has been through too much for too long for us to be fooled by the illusion that something could be good for Jews in Israel while being bad for Jews in America. It’s a false promise that will not be borne out in time. We know that the fate and well-being of Jews across the globe are inseparable. We must remain vigilant about deeper trends that threaten us and not hesitate to publicly identify danger when we see it.

The stain of anti-Semitism in and around the Trump administration is all too real. Jews everywhere should call on him to use the occasion of his visit to Israel to clean house and permanently cut ties with the extremists in his midst.

About the Author
Simon Greer is an American Jew, father of two and social entrepreneur. He previously served as CEO of Jewish Funds for Justice and founded Jews United for Justice.
Related Topics
Related Posts
Comments