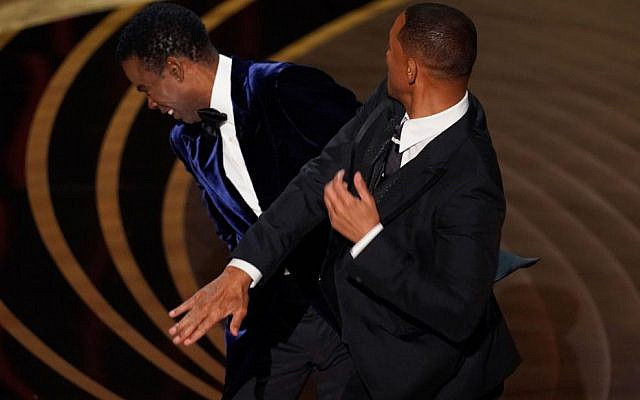 Will Smith’s slapping Chris Rock at the Oscars has attracted a lot of attention. And for good reason. One is never justified in assaulting a person simply because they were offended by a verbal comment, irrespective of its insensitivity.  Jewish tradition, which regards the way we speak as critical and fundamental to our humanity, would still never condone such behavior. Then why didn’t anyone confront Will Smith after he did this? Why did he still get an Oscar and a standing ovation after his acceptance speech? If so many people agree that Will Smith’s behavior was wrong, why did everyone rise to their feet and clap for him just a short time after the incident?

To give everyone the benefit of the doubt, perhaps the crowd in the moment, or even throughout the night, were just stunned and unsure how to react.  But I fear there’s something deeper.  Protesting Will Smith’s acceptance speech or at least refraining from clapping after he delivered it, would have been the right thing to do.  But standing up to Smith that night would not have looked good, and our culture seems to care more about how things look than what is right or wrong.

Nothing could be further from the Jewish perspective. The book of Genesis tells us that after the flood God sent to destroy the world, Noah planted a vineyard and became intoxicated. The Torah describes a very unflattering scene where Noah is found drunk and disrobed in his tent. (Genesis 9:21). The reaction of Noah’s son’s to their father in this state was different and according to the Jewish Sages, laid the groundwork for future generations.  Two of Noach’s sons, Shem and Yefet, took a garment, walked backwards so as not to show him any disrespect, and covered their father’s nakedness with the cloth.

In describing this act of respect, the Torah says: “and Shem and Yefet took” (Genesis 9:23) but the word “took” is written in the singular even though it was both Shem and Yefet who covered Noah.  Rashi, the Biblical commentator, tells us that Shem initiated the action and Yefet followed him and therefore: “Shem merited the mitzvah of tzitzit and Yefet merited the mitzvah of burial”.  Just a few verses later, the Torah tells us that Noah blesses his son, Yefet, by saying that God should “grant beauty to Yefet” (Genesis 9:27) and we have a tradition that whereas the Jewish people come from Shem, Greek civilization is descendant from Yefet.

What does this all mean?

Rabbi Joseph B. Soloveitchik spoke of two different motivating factors in human behavior: Etiquette and Ethics: “Ethics obligates a person to do what is right and just, even if he is by himself and there are no other people around who will see him to praise his actions.  To the contrary, even if there are other people there who will mock him for his desire to do what is right, he will do what is right because of his strong sense of ethic. Etiquette on the other hand, is a matter of beauty which is dependent upon the input and the approval of other people.  Etiquette changes from time to time and from country to country.  Etiquette is something that emerges from the way in which something will appear in the eyes of other people”. (Rabbi Joseph B. Soloveitchik, Nefesh Harav by Rabbi Herschel Schachter pages 272- 273)

Shem, explained Rabbi Soloveitchik, had the courage to be the first to cover his father, even though no-one was telling him to do so because he understood from his sense of ethics that covering his father was the right thing to do. And that’s why the Jewish people, the descendants of Shem, merited the mitzvah of tzitzit – ritual fringes worn beneath ones clothing reflecting an inner sense of right and wrong, irrespective of what appears on the outside or what others may say.

Yefet, on the other hand, did not act because it was the right thing to do. He covered his father only after Shem did, only so he could be looked upon in a favorable manner by others.  It was etiquette over ethics.

Therefore, the reward for Yefet was burial because the whole idea of burying someone after they have passed away stems from the honor we give to the deceased: it just doesn’t look right to casually discard the remains of a person after their soul has departed. Burial is the ultimate expression of etiquette; the blessing Noah gave to Yefet who did the right thing but only did so to look good.

Ultimately the Divine Presence rests in the tents of Shem and not Yefet because for the Almighty to dwell in our midst, our actions need to be motivated more by ethics than etiquette.  We must make decisions in life based on what is ultimately right, and not by what will be more acceptable or bring us greater approval.

We need to stop caring as much about what others think and be more concerned with doing the right thing.  Sometimes the right thing isn’t the popular thing: Saying no to a night out with friends when you have a family obligation certainly won’t make you more popular with your friends, but it’s the right thing to do. Not participating in some gossip about a co-worker may cost you some status points in the office, but it’s an expression of ethics over etiquette.

What motivates our actions and behavior? Do we act out of a real ethic based on higher values or do we just copy what other people do or act based on what others will think?

Imagine if you were there, at the Oscars watching everything.  Of course, you would be taken by the pomp and circumstance, the stars, the fame, and all the glitz.  Then you see Will Smith walk up and strike Chris Rock. What do you do in that moment?  Do you look around and wait for a modern day version of Shem to take the first step, or are you that person? Do you stand up and say something in the moment or stay quiet hoping not to stand out? These types of situations repeat themselves in our lives, maybe not every day or every week but they’re there – opportunities for us to exercise who we are as people and as Jews.
When making life decisions we should be looking up towards a higher value system – not around the room to see whatever else is doing.  That may not get us more “likes” or make us more popular, but if how we act reflects a higher truth, it will bring real value and meaning into our personal lives and into our society.
About the Author
Rabbi Mark Wildes, known as The Urban Millennials' Rabbi, founded Manhattan Jewish Experience (MJE) in 1998. Since then, he has become one of America’s most inspirational and dynamic Jewish educators. Rabbi Wildes holds a BA in Psychology from Yeshiva University, a JD from the Cardozo School of Law, a Masters in International Affairs from Columbia University and was ordained from Yeshiva University. Rabbi Mark & his wife Jill and their children Yosef, Ezra, Judah and Avigayil live on the Upper West Side where they maintain a warm and welcoming home for all.
Related Topics
Related Posts
Comments