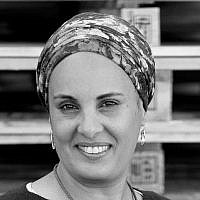 The Blogs
Gilat Matuf
Apply for a Blog
Please note that the posts on The Blogs are contributed by third parties. The opinions, facts and any media content in them are presented solely by the authors, and neither The Times of Israel nor its partners assume any responsibility for them. Please contact us in case of abuse. In case of abuse,
Report this post.

When I was a child, I remember being afraid to even raise my hand in class because I was afraid that the answer might not be right.

And now… now, I find myself standing in front of an audience and telling a story that leaves me feeling nothing less than completely exposed. It is my personal story.

But I believe that my telling the story is the mission for which I was placed into this world. So I will continue to tell it as long as I can…

I was refused a get.

The truth is that for four years of this five-year ordeal, I didn’t even know that I fit into the category of “agunot” because, in all honesty, he never said the words, “I refuse to give you a get.” But facts speak louder than anything he could or could not have said. Here I was, years after we separated and I still didn’t have that document that would free me; refused a settlement again and again, despite all my efforts to reach a fair agreement.

Our story is one that many people experience — and in many ways, it’s not even complex. Basically, we couldn’t come to an agreement regarding our home. But beyond that basic dispute, there were many other underlying issues that, when carefully unwrapped, reveal the real challenges. There was the story of a father who refused to pay child support. The story of a husband who left his wife to pay off his debts. The story of financial challenge, not to mention the many emotional and psychological issues.

And then there was the story of a woman who just wanted to find a way out of this mess, but was facing off against a man who had no such desire and never presented workable solutions of his own.

Our story dragged on. Days became months and months became years and it literally became a story of survival, trapped in a marriage in which I didn’t want to be…

It was a deeply challenging time. Struggling constantly to pay bills and struggling daily to hold it together. Every week came the same question of how would I be able to put food on the table for Shabbat when there was simply no money. I needed to stay strong for the children — or at least to make it look like I was staying strong, while inside all I wanted to do was to yell and break down in tears.

Besides the emotional crisis was the practical one. Running between lawyers to try and attain a settlement. Anxiously waiting between one hearing and the next. Hope followed by disappointment. Constant ups and downs, where the goal was just to stay afloat.

I wanted to be free! I needed to ensure my future! Enough of living without any idea what lay over the horizon and with a sense that I had no control over my destiny.

I wanted love. To love and to be loved. I wanted a relationship with real camaraderie.

I didn’t want to be tied down to a man who simply wanted to control me because he knew he could. He had moved on with his life, but he knew that he still maintained power over me.

It was at that point that I was introduced to Yad La’isha and reached out to them.

Beyond the legal support, the organization also helped me emotionally — something that is so important for women who are forced to go through these challenges.

And they gave me so much more.

Through Yad La’isha and the efforts of Advocate Tamar Odenberg, we launched a year-long battle to win my freedom. And it was truly a war. I enlisted every possible tool at my disposal. I recognized that I had a goal — securing that get — and I would work to do whatever needed to be done to get there. I was not going to give in.

And so, after five years, including that one year of intense battle, I finally received my get.

Perhaps it sounds strange, but in many ways, I look at that year as a period in which I grew as a person and found the confidence within me.

Sometimes it takes crisis and darkness and only then do we uncover what lies within us. Stars only really shine when it’s darkest…

But beyond what I learned about myself, I realized that I was given a mission. I firmly believe that everyone is given a sense of purpose when they are brought into this world. So it wasn’t for naught that I was brought to that place in time. My mission is now to ensure that as many people as possible are aware of the disgrace of get-refusal. To teach women that there is even such a thing as “get-refusal.” Perhaps if I had known, my divorce process could have looked very different and I would have been able to manage it differently.

I can still recall the first time that I stood in front of a room of people and spoke about this issue. It was about a month before I held the get in my hands. I stood there shaking and when I first heard my voice come out of my throat it was shaking as well. But I knew that it was important to use my experience to bring this awful condition to light and expose it for what it is.

Since then I have had the opportunity to stand in front of many audiences and tell my story. As someone who has made it her purpose to speak out, I have been blessed to tell my story to many women who give me the support I need to continue. And I feel truly blessed to give them the support they need and teach them the strength that we have within all of us. And most importantly to let those women who might be struggling like I did know that there is hope and light even in the darkest of places.

About the Author
Gilat Matuf was freed from her get-refusing husband with the help of Yad La’isha, the Monica Dennis Goldberg Legal Aid Center and Hotline, part of the Ohr Torah Stone network.
Related Topics
Related Posts
Comments