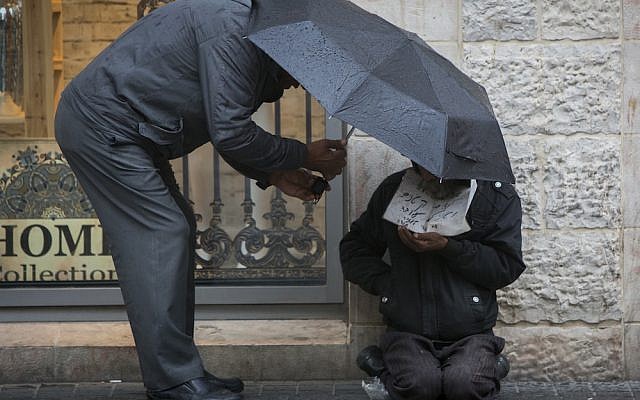 A homeless man in Jerusalem. Under Prime Minister Benjamin Netanyahu, Israel has emerged as one of the developed world’s most economically unequal countries. (photo credit: Yonatan Sindel/Flash90)

The Jewish New Year is a time of reflection. On Yom Kippur we reflect on the past, criticise ourselves and pledge to do better in the year to come.

One of the most haunting and compelling phrases in Avinu Malkeinu is ‘V’Ayn banu ma’asim,’ which broadly translated means ‘Alas, we do not do what we should be doing’. In other words, we should do these deeds, but do not. The human predicament.

As we read in the Mishnah and other commentaries, too much success and power invariably lead to a lack of self-criticism and a state of self-complacency. Those who arrive at the top nearly always come to believe — often in a very short time — that their success is due to their unique abilities and deeds. Hence they and their offspring should be given special compensations and powers.

Israel was the first country to demonstrate that a form of socialism could succeed. However this was due to the nature of the Jewish people, who excel in working together. In the Soviet Union and other countries socialism did not work.

In the 1970s, Israel — perhaps for geopolitical reasons — decided to demonstrate that a form of cut-throat capitalism similar to that propagated by Margaret Thatcher and Milton Friedman was the only viable economic model. This mindless dogmatism has gone so far that hundreds of thousands of Israelis do not have enough to eat. This year the number of people asking for charity, and/or going through the trash bins, has skyrocketed.

Grab as grab can grab is not an attractive ideology

While Israel should gain huge benefits from large-scale immigration of idealistic Jewish immigrants, the opposite is occurring. Current policies have nothing to offer new immigrants. Who would want to start a new life in a land in which the chief ideology is ‘grab as grab can grab’? Tens of thousands of frustrated immigrants have joined a new movement called Keep Olim in Israel.

Government ministers often base their decisions on reports written by bureaucrats who have no idea of the veracity of the information they receive and provide. I recently read the book ‘Catch the Jew’ by the journalist Tuvia Tenenbom. This book on Israel was the best and most convincing I have read in my life. However some senior government ministers refused to meet the author because they had been informed he was some kind of left-wing troublemaker.

My own experience with Israeli government ministries has been a nightmare. While working as a journalist in the Netherlands I was attacked by a pit-bull and had numerous ‘accidents’. Later I was informed by various sources that the pit-bull attack was not an accident. It seemed that my writings concerning the complicity of Dutch bureaucrats and businessmen during the Holocaust, as well as other illegal acts perpetrated by the Dutch judicial system, were not appreciated. Needless to say, I have had numerous problems with government agencies. Why? They apparently base their decisions on information sent by Dutch ministries.

Have start-up founders lost their touch?

Signs that the Start-Up Nation is bogging down are ubiquitous. It is nearly impossible to contact start-up companies which advertise that they make technology easier since contacting them is too confusing for words. The start-ups praise Shimon Peres in unison. However, they completely ignore the fact that the former president was a visionary in longevity. At the same time, many companies in Israel parrot the same kind of age discrimination slogans afflicting much of the Western world. They are only interested in ‘young talent’.

Perhaps the pioneering start-up founders can follow in the footsteps of Shimon Peres. Why don’t those who earn ‘obscene amounts of money’ donate 10% of their tax-deductible income towards creating more chances for those at the bottom of the food chain? And while they are at it offer education and jobs to those between the age of 67 and 120.

They could also prove they have not lost their touch. All managers should every now and then spend some time surviving in dire poverty. This would provide them with an abundance of new ideas.