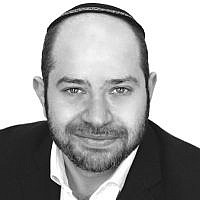 The Blogs
Gideon Schulman
Apply for a Blog
Please note that the posts on The Blogs are contributed by third parties. The opinions, facts and any media content in them are presented solely by the authors, and neither The Times of Israel nor its partners assume any responsibility for them. Please contact us in case of abuse. In case of abuse,
Report this post.

Multiple Sclerosis is a curious disease, in which the body attacks its own healthy cells, nobody is sure what causes it and there is no cure. The consequence of the attacks is that the protective coating around the nerves becomes damaged, affecting and damaging the nerves themselves. This can affect people in different ways with differing severity.

My first memorable symptoms were Yom Kippur 1998, whilst at Uni in Hull. I remember experiencing numbness and pins and needles in my hands and from the waist down. I put this down to fasting but a few days later it was still there, so I went to see my GP who told me it was psychosomatic relating to stress and it would go away.

Which it did after a couple months.

Similar symptoms came and went but I ignored them and tried to have a ‘normal’ student life, co-hosting a Radio show for the University Radio station, becoming a member of Hull Race Equality Council, running awareness programmes across the city regarding better relations.

Equalities and Diversity Officer for the Students Union, representing NUS and representative to University staff equalities group. Producing for the University material educating diversity, bullying and harassment. I was also actively involved with the J-Soc and UJS, facilitated tours of the local Synagogue and talks for Schools.

In the summer of 2001, I was with my parents in Leeds, when over a course of the day, I developed a headache, my vision turned green before going.

A&E diagnosed me with optical neuritis and referred me to the neurologist.

In October my appointment came, my sight had returned and so had the pins & needles from the waist down, it was at the appointment at around 11.00 I was diagnosed formerly with Multiple Sclerosis. It was at the moment I made the decision, that although the MS was part of me, it would not be what defines me.

I relocated to London and building a career in HR. I continued having relapses and they would go into remission. Around 2010 the disease took a new direction, the remissions stopped the condition became progressive and constant, the numbness, pins & needles, balance, reduction in walking distance, affect on my thinking and memory, constant pain now became my new norm. In 2015, it reached a point where I was no longer able to work full time, and so I found a new direction creating a home care agency.

Growing up in Leeds, my family were and still are very involved in the community, being on parents committee and executive of the Talmud Torah, my mother becoming a teacher there, actively involved with the Shuls they were members of, my father becoming vice-president.

My father was a producer on the local BBC Jewish radio Programme, my parents help set up a local Anthony Nolan branch, my Mother helped with costumes for the plays at the Jewish High School and has been managing the Chevra Kadisha for the last 20 years.

This had a positive effect on myself, my younger brother and sister. Consequently, I ran Shul Youth Services, taught at the Talmud Torah, helped run youth clubs and sat on the Youth Council, helped my father at the Radio and became a member of the Chevra Kadisha.

I don’t know why I have MS and probably won’t find out until I reach Shamayim. However, I do believe that HaShem only gives you challenges that you can cope with, however impossible it may seem. In some ways I feel my MS is a positive, it makes me a stronger person, more resilient, puts life into perspective. 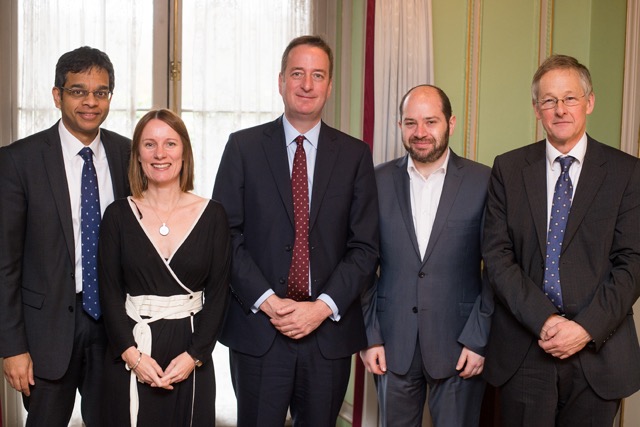 Rabbi Gideon at a BIRAX (Britain Israel Research and Academic Exchange Partnership) held at Whitehall with the British Ambassador to Israel David Quarrey, and Chief Exec of the MS Society Michelle Mitchell

Like everybody, I have my bucket list of what I want to achieve in life and although I may not be able to take the most direct route, I will find another path to achieve this.

I joined the Disability Committee for Jewish Care, helped create a Jewish MS support group, volunteered for the MS Society, eventually becoming a trustee and I have more achieve.

For the last fifteen years Hematopoietic stem cell transplantation (HSCT) has been used to treat MS.

The process in effect wipes and reboots your immune system by harvesting stem cells and using chemotherapy. To date, over 2,000 people have received HSCT with over 75% success of halting any further progression of the disease.

If the immune system is prevented from attacking itself, there is also a chance that some of the nerve damage can be repaired/regenerated. Although several centres around the world offer the treatment, Clinica Ruiz in Mexico is one of best and is why I have applied and been accepted.

I am now raising money for pre-tests, treatment, further infusions after treatment, flights and travel to receive treatment.  The overall costs come to just over £60,000.

I am being supported by the charity Briut VaOsher – www.briut-vaosher.co.uk and have a page on JustGiving.

If you feel you can give any assistance, whether it be financial, helping with a specific element of my treatment or helping me raise funds, it will be greatly appreciated.