At the end of April, I flew to Jerusalem just to sit at a Seder table. I landed at Ben Gurion on Friday afternoon and was back in Poland, where I live, on Sunday.

Fly in, sing Dayenu, fly out. Yes: I think I know what an unheard-of privilege that is. Especially for a monk.

Because the trip was a last-minute gift, there weren’t many travel options. To avoid a three-legged trip I chose — for the first time — to fly El Al.

I wish I could say it was an undiluted joy.

Having been to Israel many times, I am an old acquaintance of airport security. On return trips, I never come to Ben Gurion less than four hours before takeoff. That gives them time to open every bag and inspect every shampoo bottle and pair of shorts. (That has never not happened. I refuse to speculate why.)

I am used to having my belt buckle wiped with a gunpowder-detecting wand. Sometimes I am called over to a curtained booth for the rarer pleasure of being massaged all over by a man in gloves. Not so common in the monastery. But not such a big deal.

And, as one tells oneself, at least I’ve never been blown up. The staff in Lod have never been anything but professional; sometimes they even make a dry joke. It’s a Jewish airport, after all.

But as an (aspiring) passenger on the Israeli flagship — and coming into the system in Poland — I discovered a security regime that had none of the charm of Ben Gurion. The Warsaw El Al staff are not only Polish but polani.

From my rat’s-eye perspective of the setup in Warsaw, those who oversee security are from Israel — a brown man in a tie was in the room with me the whole time. But everyone else is Polish.

It’s a weird dynamic: Poles laboring in a rush under the eagle eye of an Israeli boss.

Why the rush? I was waiting at the gate hours ahead of time, but the Poles — no hurriers they — waited until the final 50 minutes to start examining me.Then, after a long list of questions (you’re a monk? do you know anyone in Israel? if you’re Catholic then why a Seder?) — those are the simpler ones — I was hustled down to a dirty white room in the intestines of the airport, which, besides being used to store cardboard boxes and unused folding chairs, is used to undress luckless travellers. Or so I learned.

Lacking the best Israeli equipment (as they themselves explained, pitifully), the Poles checked all the electronics by hand, turning things on and opening files.

Then it was my turn. As the Israeli watched, a Pole probed me with a sensitive metal detector and when the zipper of my trousers beeped, I had to unzip and drop trou.

Reaction? “Oh yes, it’s the zipper.” There’s gotta be some pun here on the word “fly” — but I digress.

I know some readers have experienced the same.

The trip was safe, and for that I am grateful to El Al and its Polish and Israeli workers. Once onboard, the flight attendants were cheerful, handing out chametz-free rolls. Right out the window I saw the magen David. Nice.

Now: I’m not interested in getting down to my underwear in front of an international committee, and I might avoid taking El Al again for that reason.

And yet: is it not fitting that one should be stripped before going up to Zion?

If I were Jewish and had the right to make such comparisons, I might allude to the experience of shedding every scrap of clothing and plunging into the mikveh. I have seen the ancient mikvot at the foot of Temple Mount…

But I’m Catholic, so the image that comes to me is this: Jesus is Stripped of his Clothes. It’s one of the “Stations of the Cross” — 14 scenes from the day of Jesus’s death in Jerusalem.

This way of praying — image by image, step by step through the sufferings of Christ — has been around at least since the 17th century. Usually, there are 14 small sculptures or paintings showing scenes from the sufferings of Jesus, running in line along an outdoor path or down the interior walls of a church.

People move from image to image, stopping at each “station” to say the appropriate prayers. At the end, Jesus is laid in the tomb. I have done this on Fridays in Lent since childhood.

Station 10: Jesus is Stripped of his Clothes. 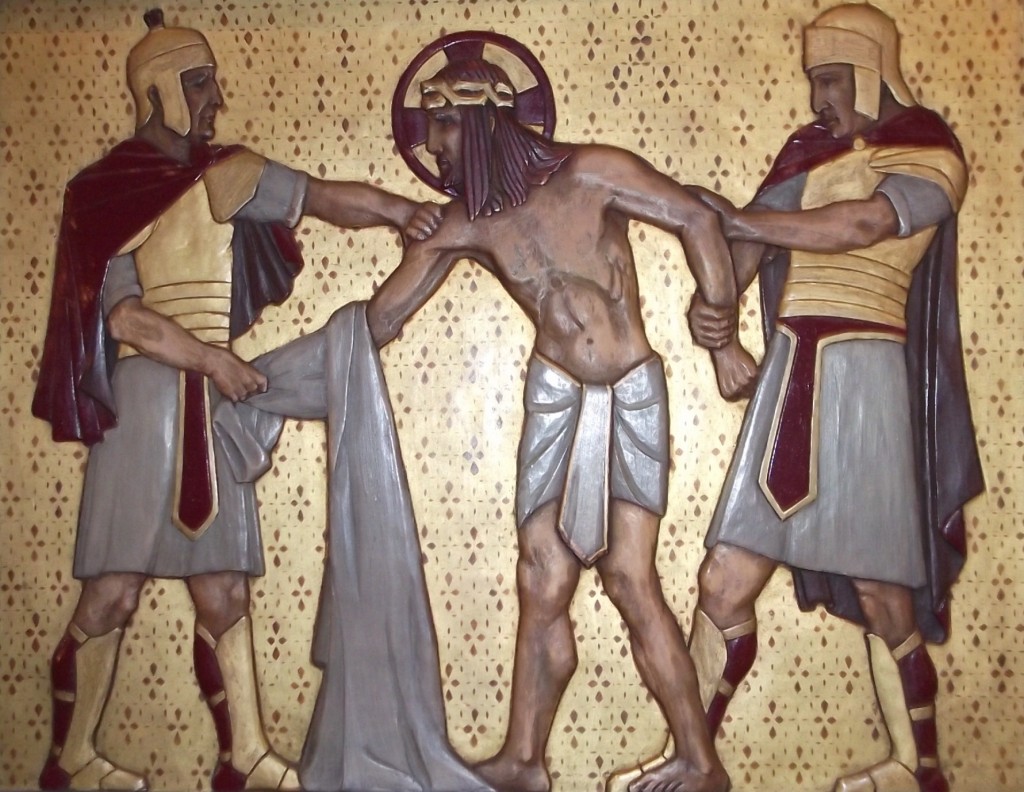 (When you see a crucifix and the nearly-nude Jesus hanging there — this is how he got that way.)

Sometimes, this image is used for a meditation on the dignity of the body and the value of sexual purity. Just as often, people meditate on Jesus’s humility in offering himself naked on a cross. We see in Christ’s debasement an expression of total love.

After the trip, I told my story to an ultra-modern “older lady” I know, who lives in the Negev. She’s a whiz at instant messaging. I clacked out my adventure on the keyboard, trawling — maybe — for sympathy.

“Yeah, that happened to a friend of mine from Europe, and he had it worse than you,” she typed back from the sands. Then, making clear her point: “Finger up the tachat.”

So genteel, this friend.

But she kept typing and — in the very next line — this flashed on my screen:

“It’s amazing what people go through to get to the Holy Land.”

From the tukhes, theology. Where but there?

That’s why I bother to come.