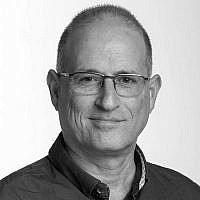 The Blogs
Haim Sandberg
Apply for a Blog
Advertisement
Please note that the posts on The Blogs are contributed by third parties. The opinions, facts and any media content in them are presented solely by the authors, and neither The Times of Israel nor its partners assume any responsibility for them. Please contact us in case of abuse. In case of abuse,
Report this post.

Few are aware that in the territories administered by the Palestinian Authority in the West Bank there is a judiciary that fights for its independence. The challenges it faces are formidable. The PA president, Mahmoud Abbas, has near-total control over the process of appointing and retiring judges. Since Hamas’s rise to power in Gaza, it too has used legislative powers to influence the judiciary. However, despite these daunting conditions, the Palestinian judiciary has, for the past several years, kept up a surprisingly robust struggle for its independence. The fortitude with which these judges are striving to uphold the integrity of the appointment of Supreme Court justices is as inspiring as it is concerning.

At the beginning of his term, Abbas exercised his authority to appoint the president of the Supreme Court without regard to the judges’ recommendations. This is how Abbas appointed Issa Abu Sharar to the post in 2005, a few months before Abu Sharar reached retirement age (70). Unlike in Israel, the PA has no procedure whereby the judge with the most seniority is appointed president. In 2009 and in 2014, Abbas appointed to the post — again without consulting the judges — jurists who served as justice ministers but had never served as judges.

By 2014, in the leadup to the appointment of Ali Mahana, the judges began to rebel. The former President of the Supreme Court resigned, the Judicial Council convened and appointed the Vice President, Justice Sami Sarsour, to replace him temporarily. The Council also sent a public letter to President Abbas asking for time to make decisions regarding the appointment of a new president. Abbas was unimpressed and appointed Mahana on the same day.

About a year later, a petition was filed in the Supreme Court to disqualify the appointment. The petition was filed by attorney Nail Al-Huh from Nablus who is known as a consistent and public critic of the violation of the judiciary’s independence. The Supreme Court overturned Abbas’s decision to appoint Mahana as its president. The court held that the need to receive the Judicial Council’s “placement” prior to the appointment is a condition for the validity of the appointment. He further stated that “the moral and material damage is particularly severe because … [Mahana] is not an ordinary judge… he is at the head of the judicial hierarchy …”.

This time Abbas was forced to accept the Council’s recommendation and appointed Sarsour as president of the Supreme Court. But a series of moves ultimately led not only to Sarsour’s dismissal and the removal of all senior members of the Supreme Court, but also to the Supreme Court’s dissolution of powers as both constitutional and administrative court.

These events also erupted into the public sphere. On September 20, 2016, the judges took to the streets to protest the invective coming from Tawfiq Tirawi (former head of the General Intelligence) aimed at then-Supreme Court President Sami Sarsour. During a demonstration on the steps of the Supreme Judicial Council building in Ramallah, a poster was raised declaring, “an independent judiciary — a strong state.”

But now a new player was added to the mix, a Constitutional Court that Abbas established in 2016 and entrusted with the authority to carry out constitutional review, formerly vested with the Supreme Court. The senior staff of the Supreme Court was excluded from its composition. President Abbas retained the authority to appoint the judges of the new court and limited their term of office to six years.

Now the time for a reform of the judicial system had arrived — in other words, it was payback day. Abbas dissolved the Judicial Council, re-appointed Abu Sharar (83 at the time) to head a Temporary Judicial Council, and stipulated in a new law that the retirement age of judges would go down from 70 to 60. All senior Supreme Court justices retired thus, at once, and had to appeal to the Constitutional Court to reverse the evil decree.

The retroactive application of the legislation was indeed abolished by the Constitutional Court, but when the retired judges returned to their chambers, the Temporary Judicial Council recommended that Abbas end their tenure. This time around, the Constitutional Court denied the judges’ petition. In December 2020, Abbas relieved the Supreme Court of its power to carry out judicial review over the executive branch by entrusting this mission in an independent and separate system of Administrative Courts.”

The dismantling of the Palestinian Authority’s judiciary continues, and for Israeli observers, it can seem like a distant nightmare. After all, Israel can take pride in its own legal system, secure in the knowledge that the Committee for the Appointment of Judges reflects all the governing authorities; the term of office for judges is fixed; the seniority method works. The Supreme Court is empowered to carry out constitutional and administrative judicial review and, as the Honorable Chief Justice Esther Hayut emphasized, “no fortress has fallen.”

But a peek beyond the fence can also serve as a warning sign of what might happen if the basic guarantees for the independence of the judiciary are undermined. And the Palestinians are far from the only system where the dismantling of checks and balances is undermining the judiciary’s power. Hungary and Poland are recent examples among others, and they should serve as a warning.

As the late Judge Cheshin wrote:

“We all knew that by lowering the stature of the judiciary ‘the people shall lose restraint’ and ‘a kingdom shall be lost.’”

About the Author
Professor Haim Sandberg is a member of the faculty of law at the College of Management (Israel). In 2017 was included in the list of candidates for the position of Israel's Supreme Court judge. He is an expert in property law and writes a personal blog at https://www.professorhaimsandberg-lawoffice.com/.
Comments