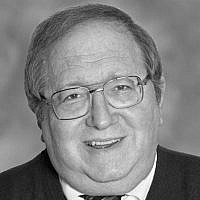 The Blogs
Joseph Rotenberg
Apply for a Blog
Please note that the posts on The Blogs are contributed by third parties. The opinions, facts and any media content in them are presented solely by the authors, and neither The Times of Israel nor its partners assume any responsibility for them. Please contact us in case of abuse. In case of abuse,
Report this post.

When technology and Torah observance intersect, unexpected consequences may sometimes result. Consider the case of Jacob Rabinowitz below.

Of all the many holidays in the Jewish calendar, Jacob loved Sukkot the best. From his earliest days as a boy growing up in the city, he would look forward to that time of year when his father would build the small, traditional canvas sukkah in the narrow courtyard of their Manhattan apartment building. Jacob loved the ingenious ways his father would devise to transport the linens, utensils, plates, and food from their fourth-floor apartment to the sukkah 50 feet below. One year the family rigged a laundry basket to slowly lower the needed items from the kitchen window to the ground below. The basket would sway back and forth on occasion, frightening any neighbor who happened to be looking out his or her window as the basket was passing. His father’s recitation of the Kiddush on the first night of Sukkot, a slight chill in the air, was among Jacob’s earliest, and most pleasant, memories.

While many things change in people’s lives as they age, this rule didn’t apply to Jacob’s love of Sukkot. This love extended to his studying in detail all the laws pertaining to the holiday. He knew the rules of constructing a sukkah, all the regulations on how, when, and where to enter this temporary structure and, in particular, the order of the blessings required to be recited in the sukkah. He even mastered the rules of when a person is exempt from the commandments of sukkah. In particular, Jacob knew that one was not required to eat or otherwise dwell in the sukkah if heavy rain was falling. In fact, each year Jacob would nervously scan advanced weather maps to try to predict whether rain was forecast for the first days of Sukkot.

Upon graduating from law school, Jacob met Hannah, who turned out to be the love of his life. They married a year later and moved to a small apartment in the city. Their life together was idyllic, but with the arrival of their son Benjamin their cramped apartment had clearly outlived its usefulness. In time, Jacob and Hannah saved enough for a down payment and purchased a pleasant home in Northern New Jersey. As it would happen, the closing for their new home purchase was scheduled for early August. Jacob realized that for the first time in his life he was going to be able to construct a proper sukkah in his comfortable backyard.

A week before Rosh Hashanah, Jacob bought a sturdy, paneled sukkah at his neighborhood Sukkah Depot, arranging for delivery to his home of all the necessary parts to assemble his prize. Once it arrived, Jacob immediately completed the frame, added the s’chach, and set up the electric lights required to illuminate the interior. Hannah next decorated the ceiling of the sukkah with plastic fruit, birds, and multi-colored hangings. She covered the inside walls with colorful, holiday-related artwork. It was a joy to behold. Jacob and Hannah were very pleased.

Only one remaining thing was troubling Jacob. With one week to go to Sukkot, the weather maps had turned ominous. A late season tropical storm, approaching hurricane status, was creeping up the East Coast from the Caribbean. Based on its current trajectory, the storm was on track to arrive in Jacob’s town on the first night of Sukkot! It was not a question of whether Jacob and Hannah would be eating in the sukkah that night, but whether Jacob’s sturdy sukkah would be able to withstand the driving winds that would surely accompany the storm. Jacob was greatly distressed by the dire weather forecasts that each successive day brought. It seemed so unfair; his first opportunity to observe the holiday in his own sukkah rained out!

As people often do in times like this, Jacob turned to prayer that somehow the storm could be averted. And, as so often happens, Jacob’s prayers appeared to be answered at the last minute. On the morning of Sukkot eve, a sudden change in the weather occurred in the form of a blast of cooler, but drier, Canadian air pushing the approaching storm far out into the Atlantic Ocean and sparing New Jersey the predicted downpour. Of course, Jacob was ecstatic; at the last minute, all his plans to celebrate the holiday properly were back on track.

It was now evening on the first night of Sukkot. The table inside the sukkah was set perfectly, the sparkling kiddush cups arranged in a circle, the challot protected by a spotless, white covering. Jacob and Hannah brought Benjamin’s yellow-and-white high chair into the sukkah and carefully placed him in it. Four invited guests, attired in their finest clothes, joined them in the sukkah. Jacob poured the wine into the cup, opened his siddur, and began to intone the blessings. Suddenly, Jacob stopped chanting as, accompanied by a high-pitched whirring sound, rain began to fall in the sukkah! Had the weather reports been wrong? Were the skies about to open and inundate Jacob’s sukkah after all? Whatever the case, the sukkah occupants were being showered upon, and heavily. Jacob rushed outside, looked upward, and to his amazement realized it was not raining outside at all. It was raining only inside the sukkah! Everyone and everything inside was drenched. Where was this shower coming from? Jacob finally figured out what was happening, though he could do nothing about it. After ten additional, soggy minutes, the sprinkler head, around which Jacob had inadvertently built his sukkah and which he had forgotten to deactivate, turned itself off. Obviously, Jacob, sukkah savant though he was, still had some new things to learn about suburban sukkahs.

About the Author
The author has visited Israel over 30 times, lived in Jerusalem for several years, and attended the Hebrew University in Givat Ram as a visiting student in1969-70 (a sojourn that provided him with lots of material for this blog). Born in New York City, he grew up on the Upper West Side and has spent more than 4 decades living in Teaneck, New Jersey with his wife, Barbara. He has been a frequent contributor to Jewish periodicals, in print and online. his first collection of short stories and essays, entitled "Timeless Travels: Tales of Mystery, Intrigue, Humor and Enchantment," was published in 2018 by Gefen Books and is available online at Amazon.com. He is currently working on a follow-up volume of stories and essays.
Comments