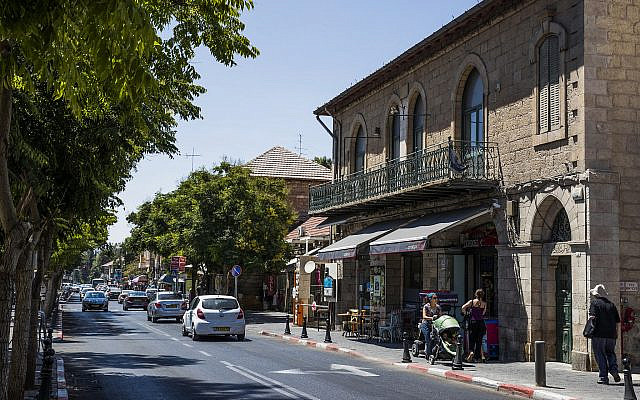 I like walking down Emek Refaim Street in Jerusalem.

I like picking up my cup of cappuccino form Aroma, and knowing: once upon a time, the Philistines used this route to mount an attack on King David’s Jerusalem. I like sipping my drink by the pet shop, and imagining those long-dead soldiers marching by the store where we sometimes buy flowers for Shabbat. I like relaxing in the stone wall’s shadow, and pretending that I can see their iron weapons glistening in the sun.

Not too long before that march, the Philistines were the only ones to wield iron weapons in the land of Israel. They used their technological advantage to keep all other locals submissive to their will. But prophet Samuel and king Saul rallied the Israelites and broke the Philistines’ stronghold over the mountainside, pushing their armies down into the hills and flatlands closer to the sea. King David built upon these victories to solidify his kingdom’s independence from Philistine encroachment, and from the Philistine monopoly over iron, too.

The march through Emek Refaim (the valley of Refaim) was a last ditch Philistine effort to beat David in his own capital, and it failed spectacularly. David routed the Philistine army, chased it all the ways to the hills of the shefelah, and ended a threat that plagued the Israelite tribes for centuries.

With this one victory, David solidified his reign.

When I walk down Emek Refaim Street, I feel my present blending into David’s story, and into the other Jewish lives and tales that came before my time. I feel like I can breathe in our connection with this land and with those who had once walked here. I feel like I am home, where I belong.

Do you know who else is here to stay?

Hassan, the cab driver who drove me last night, is here to stay, too.

My Arab neighbor, whose name I do not know, is here to stay, too.

The Arab family I met on a hike once, and whose kids taught me some words in Arabic, is here to stay too.

The Arab doctor who helped me birth my son is here to stay, too.

Israel’s Arabs don’t share my nostalgic memories of King David. They don’t share the ancient faith and past that tied us to this land, nor the millennia-long yearning that brought us back here in the modern era. Our symbols, our civic language, stem from a past they had no part in. And yet, they’re here to stay, and it’s their country, too.

I stand on Emek Refaim, sipping coffee. And my Arab neighbor stands here too. And this — this moment where we stand, physically close yet oh so different — is the deepest truth and the deepest challenge of this land we share: we are all bound to this land, and therefore to each other. And whether we like it or not, we will be bound tomorrow, too.

These past two weeks left us all weary and wary and deflated. I can’t pretend to be as optimistic as I used to be, before. I can no longer greet my neighbor without wondering what he sees when he returns my smiles. Was everything we shared before but a veneer of manners over enmity, and how am I to know?

Can I truly trust the honesty of his genial “hello”?

Nor can I dismiss a friend’s animosity towards her Arab neighbors in Lod as mere prejudice. How can I, when she has lived through days of violence and riots, and had to flee her home, as people whom she had trusted sneered when she passed?

But when the sun rises on the day after this time of crisis, it will still rise on all of us, Jews and Arabs, friends and foes. And when it does, we will face the ancient choice all humans face when things are difficult: do we accept the terms of our reality as given, or do we strive to reach beyond it, into a better option, yet unknown?

Do we embrace today’s weariness and burnt bridges as the limit of what we can aspire to, in all our shared tomorrows? Or do we say — there must be ways to live together better, and we will seek them out, weary or not?

This choice, too, makes me think of King David. He had to make it once upon a battlefield, facing a giant. Everyone expected the battle to be fought hand to hand, with swords or clubs, with knives or spears. And under the terms of that universal expectation, David was doomed to try and fail. But David saw a choice where others saw one hopeless option. He saw that he could either fight and die on Goliath’s terms, or try a different, unexpected path. He threw a rock, and changed the course of history. He shaped a future where others were but continuing a past.

I don’t know yet how to build the future that I would like for us to share here. And I am tired, and sad, and weary — and need some time to come to grips with what we’ve lost. But when the sun rises, I know what choice I will be making. I stand on Emek Refaim, where King David once solidified the independence of his kingdom. And I know that like this ancient king, I choose to reject the present as it stands now. I choose to forge into the future, armed with will and hope.