The Blogs
Paul Mirbach
(PEM)
Apply for a Blog
Advertisement
Please note that the posts on The Blogs are contributed by third parties. The opinions, facts and any media content in them are presented solely by the authors, and neither The Times of Israel nor its partners assume any responsibility for them. Please contact us in case of abuse. In case of abuse,
Report this post.
Or, why the initiative of the Supreme Court Override Clause has nothing to do with judicial reform.
The central issue in the current coalition talks is the enactment of the Override Clause. And while parties in the coalition cloak the demand in a somewhat innocuous misnomer of having to reform the judicial system, there is actually nothing in the initiative that has elements of good faith or concern for preserving the proper functioning of our democratic system.
In fact, the complete opposite is true; the whole initiative is tainted with bad faith and self-interest. This is why the enactment is essentially a power grab, and possibly the first step towards undermining Israel’s delicate democratic character.
1. The first consideration is why the Supreme Court Override clause not only weakens the democratic structure of our system but essentially emasculates it. In a properly functioning democratic system, there are three independent arms of governance; the administrative arm, the legislative arm, and the judicial arm. Each arm needs to be independent, to ensure oversight and acts as a check on one arm having disproportionate, or absolute power. In Israel’s political system, the head of the ruling party is also the head of the administrative arm. And because we don’t have two legislative houses like they have in the US and Britain for instance (which would ensure that legislation passed can be reviewed by a higher legislative body before enactment), we are in a situation where there is effectively no separation between the administrative arm of government and the legislative arm. This situation is made even more acute, when the Prime Minister has absolute control over the ruling party like we have today. It makes the legislative arm subservient to the administrative arm.

So, already we have a compromised functioning democracy. Taking away the independence of the judiciary, which today is the only recourse for minorities to protect their rights against majority overreach, would place all the power in the hands of the legislature and those who are in power, giving them the unlimited ability to pass whatever laws they like, with no checks or limits to what they can do, whatsoever. Any law they want to pass – laws that trample basic human rights, or that “gerrymander” the advantage of their majority today, to ensure that they can remain in power in perpetuity, effectively turning Israel into a tyranny of the majority, will have no obstacles to stop them. 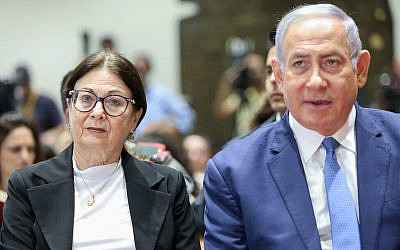 Prime Minister Benjamin Netanyahu and Supreme Court president Esther Hayut. (Courtesy of the Times of Israel. Photo by Noam Revkin Fenton/Flash90)
Now, there is something to be said for the legislature having oversight over Court decisions. No body, and certainly not the Courts, is infallible. However, it needs for that oversight to be bipartisan and it should have a special majority of 2/3 of the Knesset – something that would make sure that the judicial overreach is seen to be as such, relatively free from political considerations. That is not the case at hand. The parties in favor of the override Clause are angling for a majority of just 61 votes. They are hell-bent on removing the court’s decisions as an obstacle to their political agenda, regardless of whether it goes against legal precedent, or whether it contradicts other laws that safeguard our rights.
So, this has nothing to do with reform to fix a dysfunctional democratic system. This is a power play, abusing the majority that the forthcoming coalition holds to fundamentally and radically change our system of government, to their perennial advantage. It is tantamount to the Enabling Law, a stepping stone in the transformation from being a democracy to become a regime.
2. All the parties who want to legislate the Override Clause want to pass the law for their own parochial, political agenda;

– The Religious “Zionism” party needs the Override Clause to overturn Supreme Court decisions regarding illegal settlements in the West Bank, and Court orders to dismantle those settlements deemed illegal – for whatever reason. 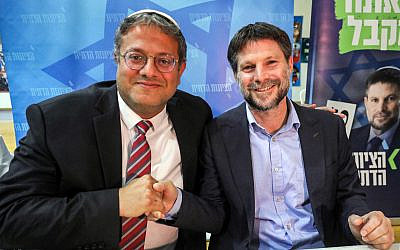 Ben Gvir and Smotrich. (Courtesy of The Times of Israel. (Gil Cohen-Magen / AFP)
Netanyahu’s desire for the Override Clause is to stop the Supreme Court from blocking legislation granting him immunity from prosecution and to cancel the court cases against him.
And the Haredim are interested in the Clause so that the Supreme Court cannot interfere in their business regarding anything from removing women from the public sphere to agunot, mixed marriages, civil weddings, and changing legislation regarding who is a Jew and the Right of Return.

All are motivated by self-interest and are looking no further than the free rein that a subjugated judiciary would allow them. 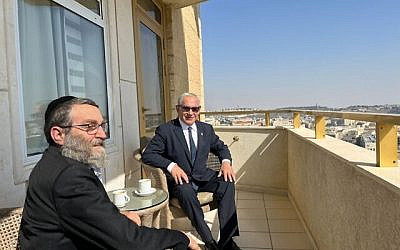 MK Moshe Gafni of UTJ meets with Netanyahu. Gafni wants the override Clause to change the Law of Return, so that Reform converts are disqualified from having the right, (Courtesy of The Times of Israel).
Not to mention changing the laws regarding the right to the franchise (or the disenfranchisement of minorities), election integrity, and voter suppression – all are for the taking. As well as legislation to ensure Right Wing control in Israel “forever”. And let’s face it: there is nothing that these parties have done to comfort us that any of these parties will be committed to acting with statesmanlike responsibility.
3. Finally, there is the case of Israel’s judicial international standing. The integrity of our Supreme Court enjoys the respect and even the deference of international judicial bodies like the International Court of Justice and the International Criminal Court (which prosecutes war criminals – Slobodan Milosevic, remember)? The independence of our judiciary and the impartial dispensation of justice, based on legal jurisprudence and precedents – as opposed to political bias – is precisely why the International Courts have refrained from taking a stand regarding our activities and our policies in the West Bank and Gaza. Thanks to the independent decisions of the Supreme Court, Israel was able to prove that our Courts are capable to monitor us. In many ways, the Supreme Court has been our flak jacket, protecting us from international censure and legal action. It is the reason why the International Court of Justice did not prosecute our commanders during Protective Edge. The way the courts handled the Elor Azaria affair gave our Courts invaluable credit in the eyes of the international community.
The minute the Override Clause passes, and the Knesset has the authority to overturn court decisions, we will lose our standing. Our policies and laws, especially about the West Bank and Gaza will come under scrutiny. Our military commanders and political leaders will be exposed to prosecution in the ICC. And we will be forced to defend our actions in the hostile arena of the ICJ. Not to mention sanctions.
But, it seems that the holy crusaders, intent on stripping the Court of its independence, are completely unaware of just how much Israel’s standing in the international community is in jeopardy if they pass this law. They are blinded by their fervor and more blind with regard to the far-reaching consequences of passing this law.
Prepare for Israel to officially become a pariah state.
Who was it who said, “Forgive them, Lord, for they know not what they do?” Except, as a Zionist and as a person who loves Israel deeply, I will not forgive them.
About the Author
Paul Mirbach (PEM), made Aliya from South Africa to kibbutz Tuval in 1982 with a garin of Habonim members. Together they built a new kibbutz, transforming rocks and mud into a green oasis in the Gallilee. Paul still lives on Tuval. He calls it his little corner of Paradise.
Related Topics
Related Posts