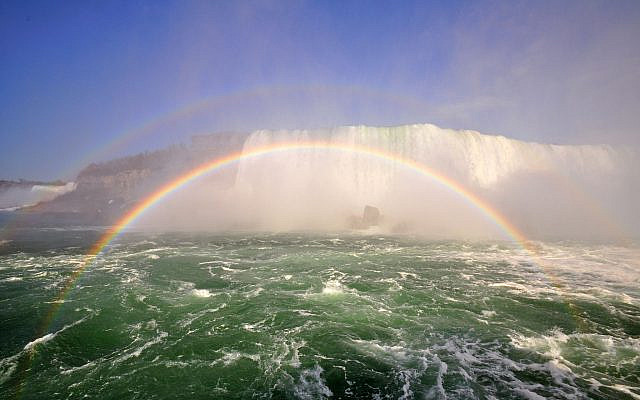 The Torah portion Vayakhel deals with the construction of the Mishkan, i.e., the “Tabernacle.” In Kabbalah, the Mishkan is viewed as a microcosm that represents a miniature model of the entire universe—both physical and spiritual. The Mishkan was comprised primarily of two categories of objects. The first category included the coverings that made up the roof and the walls surrounding the Mishkan. The second category included kelim—the objects inside the Mishkan. This is not the first time the description of the coverings and kelim appear in the Torah. In the Torah portion Terumah, God gives Moses detailed instructions for the construction of the Mishkan. Interestingly, in Terumah, God first speaks of the kelim and then of the coverings, whereas in Vayakhel, when Moses instructs the Jewish people, he reverses the order and first speaks of the coverings and then of the kelim. Why did Moses reverse the order?

In Kabbalah and Chasidic philosophy, these two categories—coverings and kelim—are seen as the embodiments of two types of divine light—the surrounding light and the penetrating light.[1]

Ohr Pnimi, i.e., the inner or penetrating light, alternatively called Ohr Mimalei Kol Almin, i.e., the light that fills all worlds—is the light that is filtered and reduced in its intensity so that the creations can absorb it and benefit from it. It is illuminating the worlds from within. In the structure of the Mishkan, ohr pnimi manifests in the kelim within the Tabernacle, such as the menorah, altar for sacrifices, incence altar, table, Ark of the Covenant, Tablets, and the Cherubs. Ohr pnimi also manifests in the Torah. The study of the Torah, which can be understood and absorbed, draws down the inner light. This light, ohr pnimi, represents the immanent aspect of the Divine emanation.

The notions of “surrounding light” and “penetrating light” seem to defy our intuition. Can we find a metaphor for these mystical concepts in physics? But of course! The surrounding light-penetrating light duality is very much akin to the wave-particle duality of light. I discussed wave-particle duality of light in my previous essays (Abel and Cain Conflict—Wave-Particle Duality, Jacob Teaches Wave-Particle Duality, and First Fruits and the Wave-Particle Duality of Nature). As a brief reminder, historically, light was thought to be either particles (Isaac Newton was the chief proponent of that approach) or waves (Rober Hook and Christiaan Huygens were the leading proponents of this approach; Thomas Young later demonstrate the wave nature of light through his famous double-slit experiment). We now know that light has both properties: at low frequencies (long wavelengths), light behaves like waves, whereas at high frequencies (short wavelengths), light behaves more like particles.

Waves possess a unique physical property called “diffraction.” When a wave encounters an obstacle, it bends around the corners of the obstacle into the region of the geometric shadow of the obstacle. In other words, the wave of light envelops the object that stands on its way. Anybody who took a trip down the river on a canoe observed the diffraction phenomenon noticing how the waters of the river swirl around the rocks, leaving no dry area behind the rocks. This is why we use the waves of light as a metaphor for the surrounding light ohr makif.

When light behaves more like rays of particles, when encountering an object, some photons (the quanta of light) will penetrate the object, while others will be reflected by the object. The penetrating light, ohr pnimi, behaves similarly—sometimes it penetrates the words it illuminates, and other times it is reflected to its source (in which case it is called ohr hozer, the “reflected light”).

Neither ohr makif nor ohr pnimi are light per se. These are different aspects of Divine emanation—transcendent (ohr makif) or immanent (ohr pnimi). Physical light is merely an analogy. The depth of the light analogy is further underscored by the number seven. Just as the physical light is comprised of seven colors of the rainbow, so too its spiritual counterpart, ohr pnimi, has seven aspects, which correspond to seven midot (seven lower sefirot) of Atzilut: Chesed, Gevurah, Tiferet, Netzach, Hod, Yesod, and Malchut.

In the following passage, Zohar links the seven low sefirot with the colors of the rainbow:

When do they [the lights of chesed, gevura, tiferet, netzach, and hod, manifest in the sefira of yesod] appear? At the time when the rainbow is revealed in the world. Because at the time the rainbow appears then they are revealed.[2]

Furthermore, just as the physical light has three primary colors that in different combinations produce all seven colors of the rainbow, so too the spiritual light—seven midot are made of two triads: Chesed-Gevurah-Tiferet and Netzach-Hod-Yesod (plus Malchut, which is a portal to the lower world).

Like any metaphor, color as a metaphor for Divine emanations is limited. For example, it doesn’t express the infinite nature of ohr makif (with some stretch, one case say, perhaps, that a wave is not localized and, theoretically, is stretching to infinity). Nor does this metaphor capture the notion that ohr pnimi comes from ohr makif through a series of tzimtzumim, i.e., “contractions.” Nevertheless, light remains an excellent metaphor for Divine emanations that we call sovev kol almin and memalei kol admin.

As I discussed in my essay Abel and Cain Conflict—Wave-Particle Duality, wave-particle dualism is parallel to the klal-prat dualism in Torah exegesis. Waves are a metaphor for klal (general), whereas particles are a metaphor for prat (particular). Now we can, perhaps, understand why Moses reversed the order of instruction. When God taught Moses, God proceeded from prat to klal, from details to general, because before going into detail, God explained to Moses the purpose of the Mishkan:

And they shall make Me a sanctuary and I will dwell among them. (Exodus 15:8)

“Sanctuary” represents klal, and “among them” (i.e., in each and every Jew) represents prat. Proceed to explain the details of the prat was a natural continuation. When Moses repeated the instructions to the Jewish people, he proceeded from klal to prat, because he first needed to give people the general concept of the Tabernacle and the purpose of the Mishkan, before instructing them on the details.