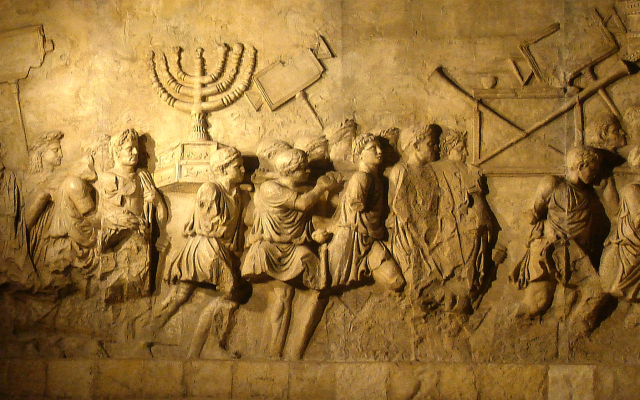 Hanukkah is one of the most widely celebrated holidays in the Jewish calendar. Commemorating the rededication of the Second Temple after the Maccabean Revolt threw off the yoke of the Seleucid Empire, it is a relatively late festival with origins from Classical Antiquity rather than the Five Books of Moses. Still, this festivity of freedom, extraordinarily long-lasting oil, and obligatory dreidel games has its basis around objects and activities that had simple, functional uses in the Tabernacle and later the Temple itself.

Hanukkah is most visibly represented by the Hanukkah Menorah, a nine-branched candleholder whose candles are successively lit, one more each night, until all eight branches are burning (the ninth branch holds an additional candle used to ignite the others). This action memorialises the so-called Miracle of the Cruse of Oil, whereby later Talmudic literature recounted that upon the liberation of Jerusalem, only enough pure oil was available to light the Temple Menorah for one day, but this one jug amazingly lasted for eight whole days, during which time new oil was manufactured. Whilst we cannot prove the veracity of this story one way or another, the Arch of Titus in Rome does show a six-branched menorah being taken as booty by Roman soldiers, demonstrating that at least during the Roman era a physical Temple Menorah did exist. It is upon this Temple Menorah that all modern menorahs are based.

Originally, the menorah was described as a seven-lamp lampstand fashioned of gold and included as part of the Tabernacle erected by the Israelites during their wanderings to contain the Ark of the Testimony and other procedural items. It burned oil, rather than candles, with the express purpose to “light the side facing it” (Exodus 25:31-37). The function of the menorah explicitly to light up the area is mentioned numerous times, suggesting a purely practical purpose of allowing the priests to see what they were doing. After all, the Menorah (along with the Incense Altar and Table of Showbread), was inside the tent of the Tabernacle itself, whilst the Ark of the Testimony was behind a veil even further into the tent. Given the thickness of the coverings over this area, enough light would have been vital for conducting safe and correct activities on the part of the priests.

Diagram of the Tabernacle and its contents from Roger D. Isaacs, Talking With God, p. 31.

Indeed, this ordinary function makes perfect sense and there is no reason to go searching for deeper metaphysical meanings of the menorah when such a logical interpretation exists.

Nearly every Jewish home has a menorah – although seldom few would have replicas of the Ark, Incense Altar, or Table of Showbread – and thus it acts as a singular reminder of that most ancient time. So, when you light the Hanukkah Menorah this year, give a thought to the Tabernacle in the desert and its priests peering through the murk of incense to reach out to something greater than themselves.

The above was coauthored with Adam R. Hemmings, a graduate of the University of Chicago and the School of Oriental and African Studies, University of London, where he specialized in Egyptian and Near Eastern studies, as well as archaeological and heritage law. He is currently engaged in research for his PhD regarding the repatriation of Egyptian antiquities removed during the colonial period.
About the Author
Roger D. Isaacs is an independent researcher specializing in Hebrew Bible studies and the author of two books, "Talking With God" and "The Golden Ark". Isaacs' primary research site was the archives of the Oriental Institute at the University of Chicago, where he is a member of the Advisory Council. He also conducted research at the Spertus Institute for Jewish Studies, as well as digs, museums, and libraries in many countries, including Syria, Jordan, Turkey, Egypt, Israel, and England.
Related Topics
Related Posts
Comments