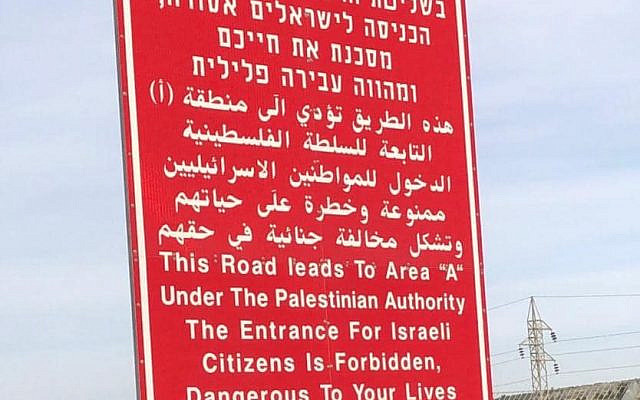 Outside of the Jewish town Yitzhar, a red warning sign was put up and quickly taken down last week. On the sign was a warning to Arabs. The sign was written in Hebrew, Arabic and English; They read, “This road leads to Yitzhar, entrance to Arabs is dangerous.” The sign mimicked the red signs posted by the Israeli government in front of all Arab cities and villages under control of the Palestinian Authority. The signs in front of Arab towns, also red, state, “This road leads to area “A” under the Palestinian Authority. The entrance for Israeli citizens is forbidden. Dangerous to your lives and against Israeli law.” The Yitzhar sign warning Arabs was seen by many as racist, and after a quick public uproar was removed.

The uproar pitted Israeli against Israeli. Many Israelis saw the sign as racist. Jewish towns pose no threat to Palestinians. In many Jewish towns (settlements) in Judea and Samaria (West Bank), including my own, Palestinians enter daily. They enter and leave unharrassed. The warning sign placed for Arabs at the entrance of Yitzhar is designed to intimidate Palestinians, not genuinely warn them of danger. Many Israelis were uncomfortable with Jews trying to intimidate Arabs just because they were Arabs.

Twenty years ago this past week, Israeli soldiers Vadim Norzhich and Yosef Avraham accidentally drove into Palestinian Authority controlled Ramallah. They were taken to a Palestinian Authority police station and lynched. Their bodies were disemboweled and dragged through the streets of Ramallah. The lynching of Vadim Norzhich and Yosef Avraham wasn’t an isolated incident. Jewish Israelis face real danger when entering Arab villages.

The warning signs in front of Arab villages aren’t racist and they’re not put up by Arabs to discriminate against Jews. While Israelis illegally enter Palestinian towns frequently, most Israelis remember what happened to Vadim and Yosef and sense palpable danger in entering Palestinian Authority controlled villages. The red signs in front of Arab villages are put up by the Israeli army and they warn of real danger. Those signs having nothing in common with the red sign put up by members of the Yitzhar community to intimidate Arabs into thinking they might be in danger. Palestinian Arabs are not in danger in Israeli towns. Even if some Palestinians point to isolated incidents of Arabs being attacked by Jews, compared to the thousands of Palestinians that enter Jewish towns daily, it is clear there isn’t sufficient danger to justify Arab worry – let alone a sign. Anyone claiming the opposite has a nefarious agenda and should be ignored.

The problem with the Yitzhar sign was that it was racist, and that is why it was taken down immediately. The problem with the red signs warning Jews of the danger of entering Arab villages isn’t the signs; it’s the enthusiasm Palestinians demonstrate for attacking Israeli Jews. Polls frequently show more than 65% of Palestinians support physical attacks against Israeli Jews. The signs aren’t racist, the Palestinians who support attacking Jews are the racists. It is about time that the Palestinian people and their leaders recognize that attacking Jewish Israelis is counter productive and only makes their lives worse. Since the 1990s, when the enthusiasm of peace with the Palestinians through the Oslo process energized Israelis and the peace camp, Palestinians have conducted tens of thousands of terror attacks and attempted many more. To many these attacks have revealed the Palestinian community’s true colors. Israeli politicians don’t talk about peace with the Palestinians anymore – only a tiny minority of Israelis think it’s possible.

In an ideal world the red signs in front of Arab villages would be taken down. In an ideal world Palestinians would recognize that violence and terrorism against Israeli Jews isn’t acceptable. Until that time, and as long as Palestinians are incentivizing terror by programs like pay for slay (which pays Palestinian terrorists on a sliding scale based on how many Jews they kill), honoring terrorists by naming schools after them, and producing television shows that encourage children to kill Jews, the red signs in front of their villages are necessary and life saving.