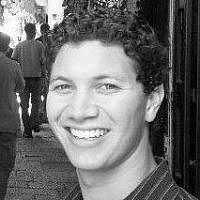 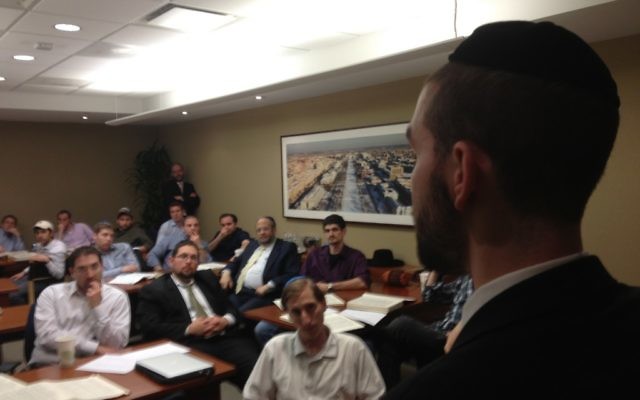 In the heart of America’s capital city, something special is happening in Jewish life. Just one block away from the White House, for the past three months a devoted group of young professional Jewish men of a variety of religious backgrounds has been gathering each Tuesday evening, not to network with their peers (as is the common pastime for weeknights in this town), but to study their shared history.

For a large and growing number of professional twenty- and thirty-somethings, and in the first offering of its kind in the nation’s capital, Tuesday night has become Talmud night in Washington, D.C.

Walk into the makeshift study hall where the weekly Beit Midrash, affectionately called “Home Beis,” takes place – twenty-five or so arms flying, fingers wagging, voices filling the room with Aramaic and ancient Hebrew (and, of course, English), hands wildly holding onto kippot atop furiously nodding or shaking heads – and, but for the upscale office space and the lithographs of the National Mall adorning the walls, you feel as if you have entered into a warp of time and space. This is the Jerusalem of my forefathers; this is the Europe I have heard of from centuries ago.  It could not possibly be Washington, D.C. – at least, not the one I thought I knew when I moved here nearly two and a half years ago.

I arrived in this city in early 2011, having left Israel a month before, eager to find meaning through working in my field of passion, modern Middle East politics and US Middle East policy.  If finding a Jewish community in D.C. was a social necessity, finding Judaism itself in this city was the furthest thing from my mind.  And yet in seeking and finding this community, the roots of the religion itself, its observances, its traditions –pushed aside for years in the mistaken belief that modern Zionism could be its substitute – have re-established themselves at the core of my identity.  As the reality of Haskalah defined my experience living in the heart of Tel Aviv, it has been the study and increasing practice of Halachah that has appeared as its counterpart in Washington.  It has been a form of integration into a contingency of young Jewish professionals that is vibrant in its unbridled celebration not only of Jewish life, but of living Jewishly.  Washington’s is a young Jewish community that shies away neither from religiosity nor modernity, a strange and beautiful combination for someone who, though a proud Jewish boy from a practicing Conservative Jewish family, understood better the secular Zionist form that modern Judaism has taken for many in Tel Aviv and in his native San Francisco.

Out of this exposure to a new side of my faith, one in which observant Judaism is compatible not only with the young Jewish population as a community but also with liberal Zionism as an ideology, arose a vision of contributing my own small portion to this family of common faith and devotion. It was a vision, I soon realized, that I shared with a close friend and fellow young professional, as well as a Rabbi by the name of Zvi Teitelbaum – a household name and a tour de force for DC’s young professional Jewish community, and a mentor to scores (including myself) in the national capital region.

Together, the three of us began methodically planning the realization of our shared idea.  In March, under the knowing guidance of Rabbi Teitelbaum and a crew of six other leading rabbis from around the national capital region, that vision came to life.

Less than three months later, we have become a community of twenty-plus young men who are coming together each week to learn, from sages past and present, in downtown D.C. For the first hour, we study the text, Hevrusah-syle, either with one another or with a rabbi, or participate in a beginners-level group lecture. The entire group then comes together for a rabbi-led discussion on the weekly text. Finally, the class closes with words of Talmudic wisdom from Rabbi Teitelbaum, intended to help us apply the text into our daily lives as young DC professionals.  An optional Ma’ariv service follows.  Most of us stay.

Home Beis – the first organized, rabbi-led Beit Midrash for Talmud study in Washington – is alive. It has become a staple of weekly life for a group of young Jewish men looking to tap into the wisdom of our sages, to see how we can apply the endless marvels of Jewish thought into our daily lives as young professionals.  It has surpassed the wildest hopes of its founders, and it is growing still.

The young men who come to learn have created a mirror, a reflection, a tribute to millennia of scholars comprising our Jewish heritage.  But the time we spend together has also created so much more than that for the Jewish present and future. Those two hours each week offer us a community of each other, one mid-week evening where we define ourselves by an ethos and history that binds us rather than domestic politics that can at times divide us.  Those two hours offer us timeless lessons that we can someday pass down to our children.  Those two hours remind us that there lies a world, and a value system, that is ineffable, not defined by or confined to this city.  They give us lucky few the key to unlock the door and escape, if only for a moment, the D.C. bubble.

And so tonight, I will enter into the classroom once more to learn as our present sages delve into the minds of those past.   It will be my final time doing so; this Sunday, I will move out of the city that has been my home for the past two and half years, as I prepare to return in August to the San Francisco Bay Area – my first home – to begin law school at UC Berkeley.

In between my leaving one home and returning to another, two other former homes of mine – Germany and Israel – await me this summer.  These next months will be about returning home, finding home, even as I leave it.

But when I board my plane on Sunday for three weeks in Berlin and a month in Jerusalem before moving to California, I will do so knowing that even as I return once more to Europe and Israel, lands of endless Jewish history and wisdom, that wisdom is growing anew today in the land where I, for the moment, still sit. For as I leave my old home, the Talmud, this majesty of Jewish thought, has found a new one.

Note from the author: Home Beis Men’s Talmud Study was created in March, 2013 and dedicated by the Lefkowitz family in memory of their dear father, Yisroel Lefkowitz, to establish the Yisroel Lefkowitz Center for Advanced Jewish Studies.

About the Author
Mark is a non-resident research fellow at the Institute for Policy and Strategy at the Interdisciplinary Center (IDC) in Herzliya.
Comments