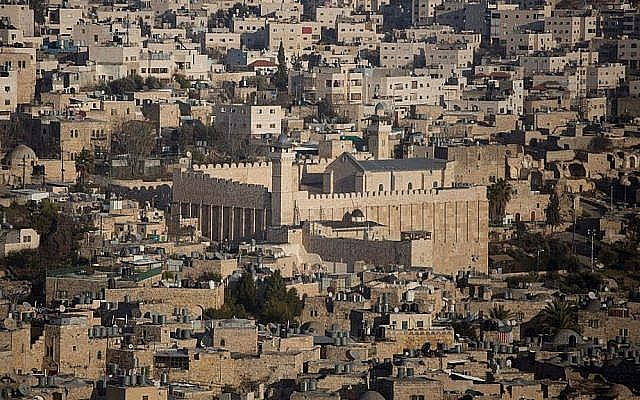 Illustrative: A general view of the West Bank city of Hebron with the Tomb of the Patriarchs at center, on January 18, 2017. (Lior Mizrahi/ Flash90)

The taxi driver’s family is originally from Hebron – al-Khalil, he says. But they have been living in Jerusalem since even before the modern State of Israel existed.

His name is Abdallah, and he has silver hair, and bushy black eyebrows, and crinkly eyes.

It’s a golden autumn afternoon, and we are stuck in traffic.

I take my earbuds out and listen.

“Your name is Sarah… It is a special name. Believe it or not, my daughter’s name is ALSO Sarah,” the driver tells me “I named her after my grandmother.”

“My son is named after my grandfather,” he says. “His name is Mohammad.”

“Maybe you think it’s funny that I’m Muslim and named my daughter Sarah… but Sarah isn’t just a Jewish name,” he tells me. “It’s also an Arab name. It’s a name for all women. It means ‘delight’ and “a woman of high rank.”

“Hey, not gonna argue there,” I laugh.

“When my wife went into labor many years ago at HaDassah Ein Kerem,” the driver says “the nurse who was with her was Jewish. Religious, you know? With her head covered, completely. My wife had a long labor – not dangerous, just long – but she and the nurse had a lot of time together and they talked.

The Nurse said she lives in Hebron where my wife’s family and my family used to live. My wife and I never lived there, but we heard stories from our grandparents about how it was. The hills, the desert… my grandmother Sarah wove tapestries… my grandfather tended his sheep. My uncle was – how do you say – a friend to the bees, and he gathered honey.

The nurse lives in the Jewish part, of course. She told my wife she never goes to the Arab part. It was strange for my wife to hear about our grandparents home from this nurse… but it was also beautiful, and she told me it made her feel connected to our roots throughout the long night.”

“I can imagine she was feeling a lot of things at once – being in labor, remembering the past…” I say.

The taxi driver nods. “Yes! Anyway, they talked all through the night – about their lives and families and histories and all kinds of intimate things… and at dawn when my wife had our baby girl , and named her Sarah after my grandmother, the nurse was shocked. ‘It’s a Jewish name!’ She told my wife. ‘That’s OUR name!’ She said.”

“How did your wife respond?” I ask.

“My wife is crazy – she is so strong – so funny. And she had just spent almost two days giving birth… so she looked at the nurse with her baby on her breast, and said ‘you think your Sarah was buried in Hebron. That’s why it’s important to you. But Hebron was also our home and it is important to us. This baby is named for her grandmother Sarah who comes from those hills. So either neither of us share and we all die with nothing, or we both share, so we all can live.’”

“My wife is powerful. And so is my daughter. Just like her grandmother. And my wife is right… Either neither of us share and we all die with nothing, or we both share so we all can live”