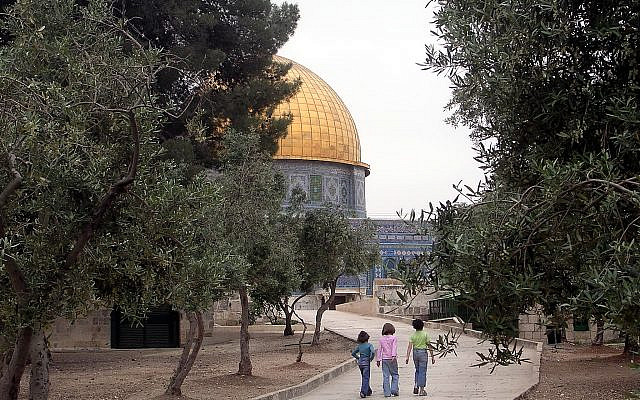 This Thursday night and Friday we will celebrate Yom Yerushalayim, Jerusalem Day, which commemorates the reunification of Jerusalem in 1967. This is an exciting day as between 1948 to 1967 Jews were not able to access a large portion of Jerusalem including Har HaBayit, The Temple Mount and the Kotel, The Western Wall.

The Temple Mount, the spot where both the First Temple and Second Temple stood is Judaism’s holiest site.

At the end of Shmuel Bet (Samuel II) 24:18-25 we read about King David’s purchase of the Temple Mount amidst a plague:

Gad (the prophet) came to David the same day and said to him, “Go and set up an altar to God on the threshing floor of Aravna the Yevusi.” David went up, following Gad’s instructions, as God had commanded…So Aravna went out and bowed low to the king… And Aravna asked, “Why has my lord the king come to his servant?” David replied, “To buy the threshing floor from you, that I may build an altar to God and that the plague against the people be stopped. And Aravna said to David, “Let my lord the king take it and offer up whatever he sees fit. Here are oxen for a burnt offering, and the threshing boards and the gear of the oxen for wood…The king replied to Aravna, “No, I will buy them from you at a price, I cannot sacrifice to HaShem, my God burnt offerings that have cost me nothing,” So David bought the threshing floor and the oxen for fifty shekels of silver. And David built the altar to God and sacrificed burnt offerings and offerings of well being. God responded to the plea for the land, and the plague against Israel was stopped.

In Divrei HaYamim II (Chronicles II) 3:1 we see that is the spot where King Shlomo (Solomon) built the First Temple:

Then Solomon began to build the house of God in Jerusalem on Mount Moriah, where God had appeared to his father David, at the place which David had designated, at the threshing floor of Arnan the Yevusi.

Although King David was the first one to be officially told where the Temple would be built, the Midrash, Pirkei D’Rebbi Eliezer teaches us that Adam, Hevel, Noach and his sons already brought sacrifices there. This is the spot which is called “HaMakom”, “The Place” throughout the Torah as well as where Akedat Yitzchak, the Binding of Isaac took place and Yaakov’s dream with the ladder where he declared (Breisheet 28:17) “How awesome is this place! This is none other than the house of God, and that is the gateway to heaven.”

Since 1967, Jews have been permitted to visit the Temple Mount under certain restrictions, but aside from a few special minyanim that Rabbi Shlomo Goren was able to set up in the summer of 1967 and shortly after, Jews have not been allowed to pray on the Temple Mount, even silently.

Many will say that we have the Kotel, so there is no reason to pray on the Temple Mount. However, when you check your history books you will find that the Kotel has only been considered a holy site for the last 400 years, during the time periods when the Temple Mount was inaccessible to Jews and it can’t be compared to the Temple Mount, the spot which has been holy since the beginning of time and where both Temples stood.

In Yishayahu (Isaiah) 2:2 we read “In the days to come, the mountain of God’s house shall be established on top of the mountains and shall be exalted above the hills; and all nations shall flow unto it.”

Yishayahu 56:7 adds “My house shall be called a house of prayer for all peoples.”

It doesn’t make sense that the holiest site in Judaism is not open for Jewish prayer. The Temple Mount should be open to all who want to pray without having to worry about being arrested.