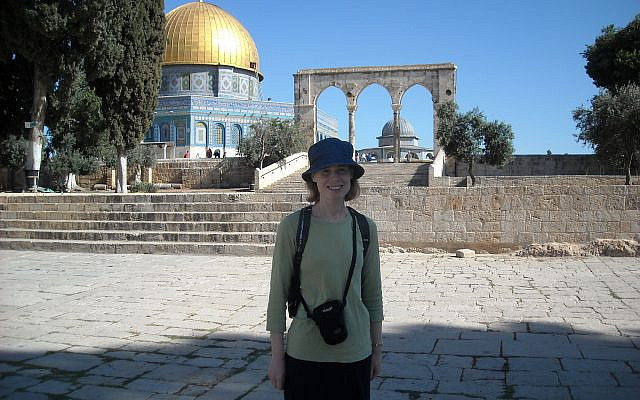 The Author on the Temple Mount, Courtesy Sharona Halickman

We learn about the Even HaShtiya, the foundation stone of the Beit HaMikdash (Temple) in the Mishna, Yoma 53b:

After the Ark (Aron) was taken away, a stone was there from the days of the early prophets (Shmuel and David) and it was called “Shtiya”, foundation. It was three fingerbreadths higher than the ground, and upon it the Kohen Gadol would place the shovel full of burning coals.

The Gemara quotes a braita to explain the name of the stone:

The stone was called Shtiya, foundation, because from this stone the world was founded (hushtat).

The Shtiya stone is the foundation of the world because it is the place of the avoda (service) in the Beit HaMikdash and we learn in Pirkei Avot 1:2: The world stands on three things: upon the Torah; upon the avoda and upon gmilut chasadim (acts of loving kindness).

Our Mishna confirms the view that the world was created from Zion.

Rashi explains: Zion was created first and then clods of material struck around it from every side and continued to do so until they reached the ends of the earth.

According to Rabbi Eliezer: The world was created from its center, as it says (Iyov 38:38) “When dirt was poured to a single bedrock and clumps stuck around it.”

Just as a navel is set in the middle of a person, so the Land of Israel is the navel of the world. As it is stated in Yechezkel 38:12, “who dwell on the navel of the earth.” And the foundation of the world comes out of it, as stated in Tehillim 50:1-2, “A Psalm of Asaf. O Almighty God, HaShem spoke and called to the earth from the rising of the sun to its setting. Out of Zion, the perfection of beauty, God appeared.”

The Talmud Yerushalmi, Yomah 5:3 brings an additional proof from Yishayahu 28:16 that the world was created from Zion: “Therefore, thus said my Lord HaShem Elokim: Behold, I have laid a stone for a foundation in Zion: a sturdy stone, a precious cornerstone, a secure foundation.”

As we read Breisheet, the account of the creation, at a time where we don’t have free movement to travel wherever we would like due to the Covid19 restrictions, let’s not take Jerusalem and the Temple Mount for granted and let’s hope and pray that we will all be able to visit the holiest place in the world as soon as it is safe to do so.