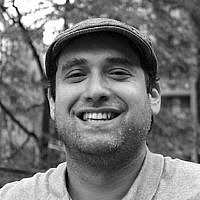 The Blogs
Joel Davidi Weisberger
Apply for a Blog
Advertisement
Please note that the posts on The Blogs are contributed by third parties. The opinions, facts and any media content in them are presented solely by the authors, and neither The Times of Israel nor its partners assume any responsibility for them. Please contact us in case of abuse. In case of abuse,
Report this post.

In the Haftara of this week, we read from I Kings about the erection of the First Temple by King Solomon. It ends with Solomon quoting the word of G-d to his father King David, “You shall not erect The House, but rather your son who comes from your loins, he shall build the house for my name”.

Why was King David, the beloved of G-d, not allowed to build the Temple? The answer is given elsewhere; 1 Chronicles 22:8, “But the word of G-d came to me, saying, ‘You have shed much blood and have waged great wars. You shall not build a house to my name, because you have shed so much blood before me on the earth”.

So much lies behind these verses.

From the beginning of the Commonwealth there was frequent tension between the Priestly caste and the Royal caste. These two elite tribes, Levi and Judah, would often vie for supremacy. The founder of the Royal House was of course King David whose hands were stained with the blood of his enemies. The progenitor of the Priesthood is Aaron. Aaron, our sages say, is the prototype of a peace-lover, “Be like the disciples of Aaron, Love peace and pursue peace, one who loves all mankind and brings them close to Torah” (Ethics of Our Fathers, Chapter 1, Mishnah 11-12) . In the previous Parsha we are told about how Aaron sought to placate the impatient Israelites and ended up facilitating the building of a golden calf. This was the the temperament of Aaron; always seeking a peaceful resolution-sometimes to a fault.

On the other hand, King David is the zealous defender of his nation, never balking at the necessity of slaying the enemies of Israel.

G-d loves them both-and the Jewish people need them both but in the building of a permanent dwelling place for G-d among Israel, the man with the blood stained hands- virtuous as he may be-has to stand aside.

About the Author
Joel is an independent scholar of Jewish history and translator of Hebrew text. He is also the founder of Channeling Jewish History, a grassroots group that disseminates information about Jewish history and culture. Check it out on Facebook.
Comments