Most people know Timna Park as the site of ancient mines and beautiful sandstone formations with whimsical names like “The Mushroom” or “Spiral Hill.” Indeed, Timna is both a geological wonder and the birthplace of copper mining. But it holds treasures that are overlooked by the more casual visitors. One of them is the Egyptian Temple dedicated to the Goddess of copper, Hat’hor.

Egyptian mining delegations came to this sandstone valley, about 15 miles north of the Red Sea during the period from 1300 to 1150 BCE They believed that in order to extract copper from the earth they needed the permission of the goddess Hat’hor. In order to receive that divine mining license, they required a temple, at which they could make offerings to the goddess.

The temple, tucked around the corner from the impressive “Solomon’s Pillars” formation, is a tiny thing.  Anyone who has visited the vast, sprawling Temples of Luxor and Karnak in Egypt, would be hard-pressed to put this bedroom-sized shrine in the same category. This is simply a testimony to what a far-flung hardship post Timna was: 300 miles from the Nile, through harsh mountainous desert. The lure of copper (which when alloyed with tin makes bronze) was lucrative enough to bring delegations this far, but they could not imagine digging an ounce of copper without the blessing of the goddess.

Hat’hor’s Temple follows the basic design principle of all ancient Middle Eastern sites of worship: There is an area where the people may stand encircling an inner area where only the priest may stand at the very center of which is the Holy of Holies where stood a statue of the goddess.

When archaeologist Beno Rothenberg excavated the site in the late 1960’s he was delighted to find over 10,000 artifacts, nearly all of them offerings to the goddess.  But he found something else a bit out of the ordinary: a half dozen unhewn stone pillars about a meter in height. These were Semitic cultic objects associated with the rituals of the nomadic tribes who worked alongside the Egyptians in the mines. The archaeologists call these people the “Midianites” after the local tribe from whence came Moses’ wife, Zippora.

Examples of these standing stones, called “matzevot” in the Bible, are all over the deserts of southern Israel, and predate the Egyptians by thousands of years. Indeed in Genesis 28:18 Jacob erects a stone altar of exactly this sort, after experiencing his vision of the Ladder of Angels. The matzevot of the Temple of Hat’hor were apparently placed there by the Midianites after the Egyptians abandoned the site. Alternatively, according to some historians, the matzevot and the cult of Hathor coexisted, making the site an ancient version of a non-denominational airport chapel. (“Service to Hathor will take place in the chapel between 9:00 and 10:30. Midianite sacrifices will be made between 11:00 and 12:00…”)

One of the most remarkable finds in the Temple of Hathor was a copper snake with a gold head, apparently also associated with Midianite worship. This snake reminds us of an episode in the Book of Numbers (4:8),  in which God sends a plague of vipers to punish the children of Israel for their rebelliousness, then relents after an appeal from Moses. To heal them, God instructed Moses, make a copper snake with a golden head, and place it on top of Aaron’s staff. All who pass and look upon it will be cured.

The thing that bites you can be the thing that heals you. That truism is perhaps the reason that a coiled snake is a symbol of healing all over the world, used by the AMA and 500 other organizations. Classicists will of course insist that this is actually the Greek Caduceus or the Rod of Asclepius (or symbols from Hindu or Norse mythology) but that would just get us into a quarrel over who came first. Suffice it to say that humans have always known that medicines can be poisonous and poisons can be medicinal. What matters are the dose and the intention.

The fact that the copper snake with the golden head appears both in the book of Numbers and in the archaeological record reminds us of the give and take between Semitic religions. Midian and Israel were cousins, both descended from Abraham.  Moses’ most important advisor was Jethro, his father-in-law, always referred to in the Bible as “a priest of Midian.” Clearly, our icons and totems were shared with, and copied from, our cousins and neighbors.

So there we were in the desert, fashioning worship sites from stones, the children of Israel in their wanderings, the Midianites in their camps, and the Egyptians in their worship of Hathor. In the harsh world that was the Bronze Age desert, we spoke to the stones and they spoke to us, and we sought some solace in the hope that in so doing, we were getting closer to our maker. Sometimes I wish we had that kind of intimacy with our natural surroundings today.

Of course, the Jewish people invented iconoclasm, smashing idols and prohibiting graven images. Even that copper snake was ultimately melted down by King Hezekiah according to Kings II 18:4. But we still have our little icon-adjacent traditions: We kiss the Torah scroll in synagogue. We recently waved the lulav around like unabashed pagans, and we blow a ram’s horn during the Days of Awe. We are, in fact, living that tension between that which is forbidden and our need to touch the stones, feel the earth, wave the branch. While the tefilin and the mezuza are a sacred commandment, to a non-Jewish onlooker, they look like a fetish. It is nothing to be ambivalent about. It’s part of what makes us human: The Torah would not have forbidden us to make graven images if it we were not drawn to just such an act.

And though we know that the Torah scroll is not God, the shofar is not His voice, the lulav is not a walkie-talkie for communicating with Him and the mezuza is not His doorbell, we can be forgiven for feeling that way, just a little bit, when we make use of these objects.  I’m not suggesting that we go back to worshiping statues. But I believe that we should have the humility to recognize that we are not so different from the ancients after all. When we strive to commune with our maker, we are reaching for the same eternity as the Egyptians and the Midianites, and our forefather Jacob facing his matzeva, alone in the desert. 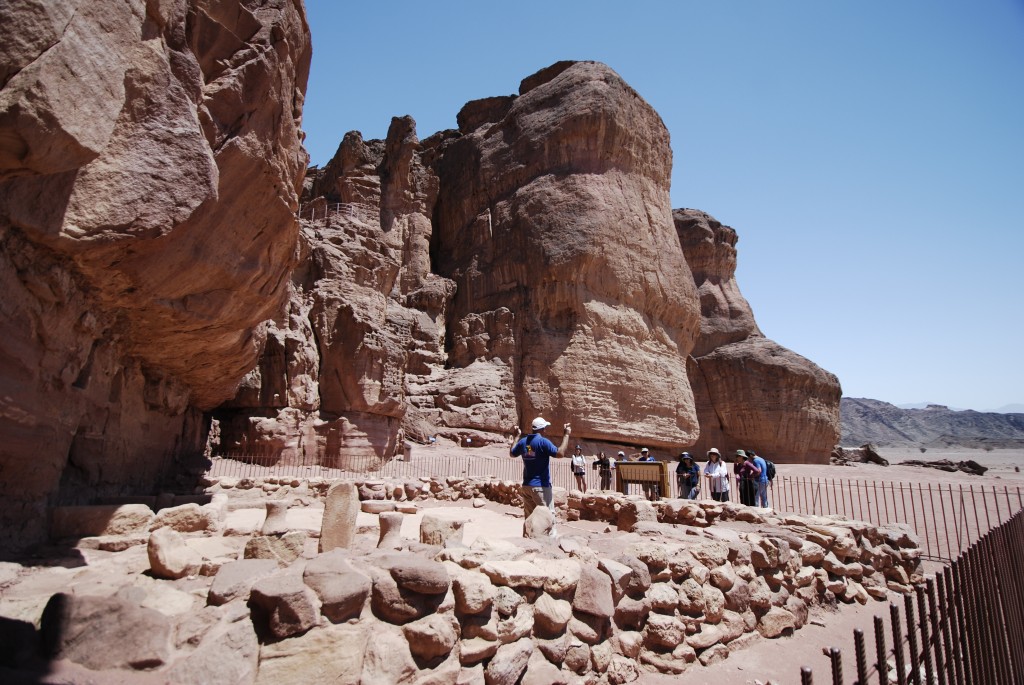 The author, speaking to tourists from inside the remains of the Temple. (Photo: Yuval Ramos)
About the Author
Bill Slott is a licensed Israeli tour guide who has hiked and biked the length and breadth of the country. Bill is a member of Kibbutz Ketura, where he has lived since 1981 with his wife and three daughters.
Related Topics
Related Posts
Comments
Advertisement